BOB ABERNETHY, anchor: This weekend, Hindus around the world celebrate Diwali, the Festival of Lights. For some Hindus, Diwali coincides with a special worship service for the powerful goddess Kali, who represents opposites such as life and death, creation and destruction. We spoke about Kali with Kamanashish Chakraborty, a founding member of the Washington Kali Temple in Burtonsville, Maryland.

KAMANASHISH CHAKRABORTY (Washington Kali Temple): Goddess Kali we consider to be the prime cosmic energy. She is the creator. She is the sustainer. She is the destroyer.

We Hindus believe, our philosophy says that creation comes out of destruction. And, what is created is destroyed again. The prime example would be the seed and the tree and the seed. The seed destroys itself to be able to germinate and sprout, which evolves into a tree, bears fruit, and you destroy the fruit to get to the seed. That’s the cycle. 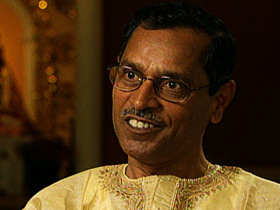 The basic image that we worship — she has four arms. The right side, two arms that offer fearlessness to her devotees. The left deal out death and destruction.

Her garland is 50 severed demons’ heads. Each head represents a letter in the Sanskrit alphabet.

She’s standing on her divine husband, Shiva — with her right foot on his chest; left, on his thigh. Shiva is very white; she is stark black. It’s the perfect union of the opposite.

The puja includes certain rituals. The priest, the Pujari, has to invoke the divine within himself. He has to become the divine to be able to offer to the divine. He has to think of himself as the god and then offer himself to the prayer.

The deities are taken care of with utmost affection, like one would for one’s own child.

We prostrate before her who is most gentle, as well as most terrible. We salute her who is the support of the world. We pray, “May the Devi, the Mother, bring forth benefits for all who sing her praises.”