BOB ABERNETHY, anchor: Finally, last weekend, the U.S. Holocaust Memorial Museum, in Washington, celebrated its 10th anniversary with a tribute to survivors of the Nazi persecution of the Jews -- to survivors, their families, and to those who rescued them at the end of World War II.

Nearly 7,000 people came, probably the last gathering of this size of the survivors, among them Nobel laureate and advocate of Holocaust remembrance, Elie Wiesel.

ELIE WIESEL (Founding Chairman, United States Holocaust Memorial Council and Nobel Laureate): Surrounded by your children and grandchildren, my dear fellow survivors, do you feel joy in your hearts? Of course you do, but it is not void of sadness. It cannot be.

UNIDENTIFIED SURVIVOR: My father kept insisting and crying, begging me, just before they took them away, that I should go and hide because I have a chance to survive. And here I am. 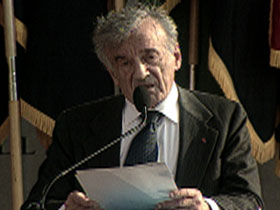 MUSEUM PERSONNEL: There you are. See, look.

MUSEUM PERSONNEL: There you are. Same smile.

UNIDENTIFIED SURVIVOR: My mother's and my father's I.D. cards -- when I open it you'll see the part that's very disturbing, and that's the part that identifies them. You see the word[s] "Jood Juif." It's a Jew. And if you got picked up without the card, you would go off to concentration camp.

TWO SURVIVORS (With Serviceman Who Liberated Their Camp): I was in Buchenwald, from Blechhammer on a death march. And I was liberated by this gentleman with the 82nd -- 97th --Army -- Infantry.

Mr. WIESEL: Close your eyes and see the invisible faces of those we have left behind, or have left us behind as witnesses. Your presence, our presence, here today is our answer to their silent question: we have kept our promise. We have not forgotten you.

The U.S. Holocaust Memorial Museum in Washington celebrated its 10th anniversary with a tribute to survivors of the Nazi persecution of the Jews. They honored the survivors, their families, and those who rescued them at the end of World War II.