VICTORIA BARNETT (Director of Program on Ethics, Religion and the Holocaust for the US Holocaust Memorial Museum): Kristallnacht is actually a euphemism in German it means the “night of broken glass” or crystal night because there were so many synagogue and home and business windows smashed so the streets of many German cities were literally strewn with broken shards of glass. 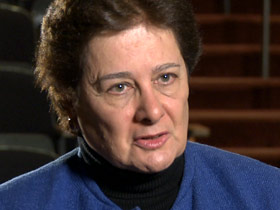 Thousands of businesses and synagogues and homes destroyed, 91 people literally beaten to death on the street, 30,000 Jewish people arrested and taken to concentration camps. It was a shock in Germany itself.

In Germany both the Catholic and the Protestant Churches for the most part were silent about what had happened. You have a very few pastors who speak out against this, who actually preached sermons condemning the violence. You do have people in both churches who are supporting what is going on certainly support its anti-Semitism. You have a minority of clergy and leaders in both churches who spoke out against it and some of whom actually eventually tried to help Jews escape or to hide. 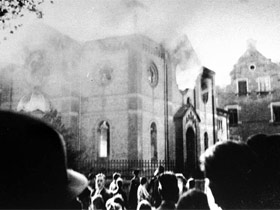 It was clear Jews had to get out. They knew this, Nazi society was actually pushing them to do it and of course this was the very moment in Europe and in this country where countries did not want to take in more refugees. Even 20,000 children couldn't get into this country; there was no interest in letting down those barriers. America was heavily isolationist still; you still had the aftermath of the Depression. You had economic situations in this country where people didn't want to let in more immigrants, anti-Semitism played a role. So there were a variety of factors that made people turn away from actively helping the Jews just as they really needed the help the most.

And for me this is really the most haunting aspects of this history, it's to see it's not that people didn't know, and it's not really that they didn't care, but to translate outrage into policy that could really stop a genocide is immensely difficult, and when you look several years later at millions of people being taken to their deaths it just shows you how high the stakes were at that particular moment.

“You had people watching synagogues burn. You had people looting business that had been plundered. You had people joining in on the violence,” says historian Victoria Barnett, who directs the US Holocaust Memorial Museum’s Committee on Ethics, Religion, and the Holocaust.