BOB ABERNETHY, anchor: Finally, this week of Holocaust Remembrance Day, the story of Father Patrick Desbois, a French Catholic priest whose grandfather’s World War II legacy led to what became for Father Desbois a sacred mission to seek out the aging witnesses of the Nazi massacre of Jews in Ukraine. They told him what they had seen as children, and what they had even been forced to assist with. Then they led him to the mass graves.

Father PATRICK DESBOIS (Yahad-In Unum): I began by Ukraine because, in the beginning, it was a private story. I wanted only to find back the memory of my grandfather, and also where was the corpses of the Jews, and to bury them with dignity. And suddenly I discovered it was an extermination — not camp, but a continent of extermination. 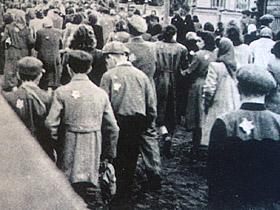 In East, they shot the Jews in public. Holocaust was in public. Secret was from West, but no secret in East. All the village was watching; all the neighbors were watching.

They were poor people, and the Nazis, they used the Soviet system of requisition to force them to work. They were forced to dig the grave, to carry the Jews in carts with horses from the village to the mass grave, to fulfill the mass grave at night, to bring back the furniture of Jewish houses and to sell them, etc.

And all these people, who have been children forced by the Nazis, they want to speak today before to die.

(From Video of Ukrainian Witnesses):

UNIDENTIFIED MALE WITNESS # 1: The people were put in a line, completely undressed. I saw this with my own eyes.

INTERVIEWER: Could you show us where the graves are?

UNIDENTIFIED MALE WITNESS # 2: They’re over there. Seeing those people who were still moving inside the grave, I felt sick. 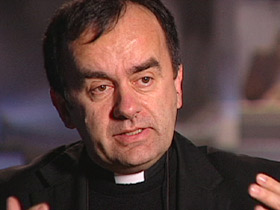 Fr. DESBOIS: You know, 60 years after they still remember the last words of the dead people. They kept this secret. One woman told me, “Father, I was dreaming all my life to find somebody to say that.”

(From Video of Ukrainian Witnesses):

UNIDENTIFIED MALE WITNESS # 3 (sitting with woman): They had rifles with bayonets. The bayonets were used to push the people in the grave.

UNIDENTIFIED MALE WITNESS # 4: We cried when we said goodbye. They were my friends, my schoolmates, David and Gricha.

Fr. DESBOIS: They know I don’t come to judge. I come to know the truth, to establish the evidences because of the deniers, and also to find back the corpses so they will receive a prayer and the dignity. If I don’t do it, who will do it?

DAVID MARWELL, PhD (Director, Museum of Jewish Heritage): Many will say it took a Catholic priest to travel all the way to the Ukraine and to unlock these memories and to locate and identify these graves. There are literally millions of people who are unnamed and whose graves are unmarked for whom Patrick Desbois has carried out a kind of sacred mission to identify their final resting place.

Museum of Jewish Heritage: A Living Memorial to the Holocaust