BOB ABERNETHY, anchor: The highest court in Massachusetts this week dropped a bombshell on a nation already deeply polarized on the issue of gay rights.

The Massachusetts Supreme Judicial Court ruled that under that state's constitution, same-sex couples are legally entitled to get married. The justices gave the legislature up to 180 days to rewrite state marriage laws to permit that to happen. So it appears that in the next six months, gay marriage will be legal in Massachusetts. But opponents of gay marriage haven't given up. They want an amendment to the state constitution that would define marriage as being between one man and one woman. Even if that were adopted, however, the earliest it could go into effect would be 2006. 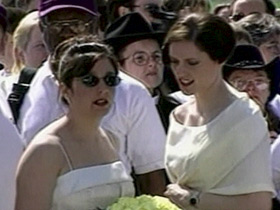 According to a new poll by the Pew Forum on Religion and Public Life, the majority of Americans -- 55 percent -- believe homosexuality is a sin. Fifty-nine percent oppose gay marriage -- that's up from 53 percent in July. And Americans with the highest levels of religious commitment reject gay marriage by a margin of six to one.

Earlier this week, Kim Lawton explored the implications of the Massachusetts ruling with Scott Keeter, associate director of the Pew Research Center for the People and the Press, which conducted the poll.

KIM LAWTON: Scott, this seems to have really galvanized people. Some are urging the U.S. Congress to take action, to maybe pass an amendment to the U.S. Constitution defining marriage as being between a man and a woman. How much pressure is this putting on politicians?

Mr. SCOTT KEETER (Associate Director, Pew Research Center for the People and the Press): Well, this is definitely an issue that the Democratic candidates for president for next year would have preferred to see stay in the closet. It has all the trappings of a classic wedge issue. Among those who tell us that they plan to vote for George W. Bush for president next year, opposition to gay marriage is almost unanimous. Whereas, among those who say they would prefer a Democratic candidate, feelings about the issue are divided, roughly 50-50.

LAWTON: And how strongly do voters feel about it?

LAWTON: Have the candidates come out in particular positions? 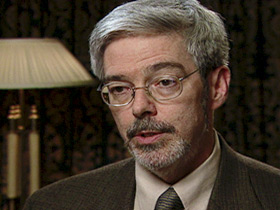 Mr. KEETER: Most of the Democratic candidates have said that they would oppose gay marriage, but would favor the idea of a civil union. And there is certainly more support in our poll for that idea -- there's a majority opposed, but only a bare majority of 51 percent; 41 percent are in favor in it. And among some groups in the population, such as younger people, there are pretty substantial majorities in favor of civil unions.

LAWTON: And that would be granting same-sex couples some of the benefits of marriage, but not the legal title of marriage?

Mr. KEETER: That's right. The poll certainly finds a mixture of attitudes about gays and lesbians. I mean, for example, a majority of the poll's respondents say that they think that gays and lesbians can be as good parents as heterosexuals. So some of the pieces of acceptance of civil unions are in place, even among a majority.

LAWTON: What about the religious breakdowns? How do different religious groups feel?

Mr. KEETER: Well, there are very big differences across religious traditions, as well as across people of different intensity about religion. We find evangelical Protestants almost unanimous in their opposition to gay marriage and generally unfavorable in their opinions of gays and lesbians. Mainline Protestants and Catholics are divided, and people who are secular, who have relatively weak religious ties or don't attend religious services, are much more accepting majorities in favor of gay marriage.

LAWTON: There's been a rising tolerance in the culture for homosexuality. Are we seeing a backlash on the issue of gay marriage, to see these rising levels?

Mr. KEETER: Well, we did find an uptick of about six percentage points from a poll that we took in July; most of that movement, however, was among people with strong religious convictions. And I think that's because people with strong religious convictions are hearing about it in churches. Big majorities of evangelicals say that their clergy talk about it and are discouraging homosexuality in the messages that they deliver.

LAWTON: All right. Scott, thank you.

The Massachusetts Supreme Judicial Court ruled that under their constitution, same-sex couples are legally able to marry. Opponents of gay marriage want an amendment to the constitution defining marriage as being between a man and a woman. Correspondent Kim Lawton explored the implications of the ruling with Scott Keeter, associate director of the Pew Research Center for the People and the Press.