KIM LAWTON: These days, Congressman John Lewis often finds himself in the role of tour guide…reminding America of the painful days of the civil rights movement. On this afternoon, he’s showing fellow members of Congress where some of the key events of the struggle occurred.

Rep. JOHN LEWIS (D-GA): I make a point of trying to take people back, and especially young people — and those of us not so young — back to the roots of the movement.

LAWTON: For Lewis, those roots were not just social or political, they were deeply spiritual — a fact he fears is being lost as more time passes. 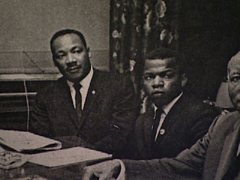 Rep. LEWIS: I’m deeply concerned that many people today fail to recognize that the movement was built on deep-seated religious convictions. And the movement grew out of a sense of faith — faith in God and faith in one’s fellow human beings.

LAWTON: Lewis got involved in the movement because of his own belief that all people were created equal in the image of God, worthy of dignity and justice. Martin Luther King Jr. inspired him to put those ideas into action.

LAWTON: The young Lewis became active in the nonviolent protests and the rallies, which were usually held in churches, and permeated with hymn singing and prayer. 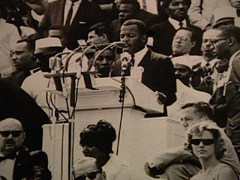 LAWTON: In 1961, as a 21-year-old theology student, Lewis volunteered for the Freedom Rides, a journey he now re-creates to teach others what happened. In an act of social defiance, blacks and whites rode on segregated buses together.

The Freedom Riders were jailed for two nights. After their release, they ended up at the First Baptist Church of Montgomery.

Rep. LEWIS (during speech): An angry mob gathered right outside of the church, in this area, and started burning cars.

LAWTON: Lewis’s activism propelled him to the inner circle of the civil rights movement, although often he was in the background. He worked closely with King and was recognized as one of the so-called “Big Six” leaders who pulled together the 1963 March on Washington. At 23, he was the youngest speaker at the march. Now he’s the last surviving speaker.

(to Rep. Lewis): How did Martin Luther King Jr. influence you spiritually? 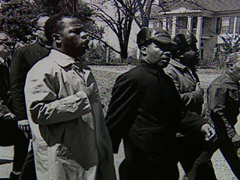 Rep. LEWIS: Martin Luther King Jr. had a major impact on my search for truth. I felt like he was doing the work of the Master. That he was saying in effect that our hands, our feet, our minds, must be the hands, the feet, and mind of God Almighty.

LAWTON: Lewis paid a price for his convictions. He was jailed 40 times, and repeatedly beaten by mobs and police. One of the most devastating incidents took place on March 7, 1965 — Bloody Sunday. Twenty-five-year-old Lewis, in a tan trenchcoat and black backpack, led 600 marchers across the Edmund Pettus Bridge in Selma, Alabama. State troopers attacked. Lewis was one of the first to fall. He was beaten unconscious, and nearly died. Today, Lewis is welcomed as a hero when he visits Alabama. Local police, many of them black, escort him around town.

(to Rep. Lewis): You went through so much. How did you move beyond it without being paralyzed by hate?

Rep. LEWIS: At a very early stage of the movement, I accepted the teaching of Jesus, the way of love, the way of nonviolence, the spirit of forgiveness and reconciliation. The idea that hate is too heavy a burden to bear. I don’t want to go down that road. I’ve seen too much hate, seen too much violence. And I know love is a better way. 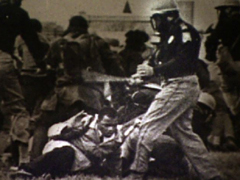 LAWTON: Nearly four decades after he fought for voting rights, the 65-year-old Lewis is an elected official, serving in his ninth term as a member of Congress. He describes himself as uncomfortable in the limelight.

Unidentified Man: The conscience of the House of Representatives of the United States, Congressman John Lewis.

LAWTON: But when he steps into the pulpit, as he did at this rally for immigrant workers’ rights, his preaching style as a Baptist minister is clear.

Rep. LEWIS (at rally): In Montgomery, an angry mob met us in May of 1961, beat us. I was beaten — left lying bloody and unconscious. But I didn’t give up. You must not give up.

LAWTON: Lewis says it was the courage and unified work of religious leaders across the spectrum that fueled the civil rights struggle. He regrets more of that isn’t happening now.

Rep. LEWIS: Sometime I feel today that maybe, just maybe, the religious leaders are too quiet. They need to make a little noise — need to push and to pull, and to be prophets. On some of the big issues, moral issues, seem like we been so silent. Somehow we need to find a way to reclaim our position as people of faith.

LAWTON: As one of the surviving leaders of the civil rights movement, Lewis wants to make sure the role of faith in changing the nation is never forgotten.

Rep LEWIS (Singing at Rally): We shall overcome someday.

Rep. LEWIS: Sometimes when I look back and think about it, how did we do what we did? How did we succeed? We didn’t have a Web site. We didn’t have a cellular telephone. But I felt when we were sitting in at those lunch counter stools, or going on the Freedom Ride, or marching from Selma to Montgomery, there was a power and a force. God Almighty was there with us.