What spiritual legacy did the civil rights movement give to the United States? 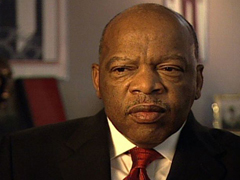 On many occasions, when we had been beaten, arrested, in jail, you had to call upon something, some force, some power much larger, much greater, and much more powerful. In my estimation, the civil rights movement was a religious phenomenon. When we’d go out to sit in or go out to march, I felt, and I really believe, there was a force in front of us and a force behind us, ’cause sometimes you didn’t know what to do. You didn’t know what to say, you didn’t know how you were going to make it through the day or through the night. But somehow and some way, you believed — you had faith — that it all was going to be all right.

You talk about the music of the movement. I’ve heard recordings from some of those meetings, where people took simple Sunday school songs and made them relevant to what was happening. What was the power of that music?

On many occasions, people would be so inspired, so moved … they would start singing some of the gospel songs or some hymn of the church. And they would improvise; they would make it current, or make it so powerful, that you knew somehow and some way that you had to go. You had to go and sit in. You had to go and march, because it was the power of the message, of the words of a song — the beat, the rhythm. And on some occasions, it was just like being in church on a Sunday morning. It was like being at a prayer meeting. And whether it was a sit-in, or whether it was on the freedom ride, or the march from Selma to Montgomery, I felt on many occasions like it was a very deep religious experience.

Are you concerned that the religious aspects of the movement are being lost the further we get from those days?

I’m deeply concerned that many people today fail to recognize that the movement was built on deep-seated religious convictions, and the movement grew out of a sense of faith — faith in God and faith in one’s fellow human beings. From time to time, I make a point, trying to take people back, and especially young people, and those of us not so young, back to the roots of the movement. During those early days, we didn’t study the Constitution, the Supreme Court decision of 1954. We studied the great religions of the world. We discussed and debated the teachings of the great teacher. And we would ask questions about what would Jesus do. In preparing for the sit-ins, we felt that the message was one of love — the message of love in action: don’t hate. If someone hits you, don’t strike back. Just turn the other side. Be prepared to forgive. That’s not anything any Constitution say anything about forgiveness. It is straight from the Scripture: reconciliation. So the movement, the early foundation, the early teaching of the movement was based on the Scripture, the teaching of Jesus, the teaching of Gandhi and others. You have to remind people over and over again that some of us saw our involvement in the civil rights movement as an extension of our faith.

At times, you had what I would call a schism, maybe a small conflict between those who said, “This is the right thing to do. We do it because it is not in keeping with the Constitution; it is not in keeping with the Declaration of Independence, [with] our Bill of Rights.” But then others were saying, “I’m doing it, I’m standing up because [of] my faith, my belief in God the Father, in the Holy Spirit, in Jesus Christ, or in the teaching of all the great religions of the world, that this is the thing to do.”

But those tensions didn’t hinder the movement?

How did Rev. King influence you spiritually, in the development of your own spiritual journey?

I grew up in rural Alabama, 50 miles from Montgomery, in a very loving, wonderful family, wonderful mother, wonderful father. We attended church; we went to Sunday school every Sunday. But one Sunday I heard Dr. Martin Luther King Jr. preach on the radio. I was 15 years old, in the 10th grade. He was talking about Paul’s letters. And he turned it around and talked about Paul’s letters to the Christians in America. And I felt he was talking to me. The words of Dr. King were so inspiring I wanted to find a way to get involved in the civil rights movement. I heard Dr. King say things like, “We must not just be concerned about the pearly gates and the streets made out of milk and honey, but we have to be concerned about the streets in Montgomery, Alabama.”

A few years later, I had the opportunity to meet him, and it changed my life. I felt like he was doing the work of the Master. That he was saying in effect that our hands, our feet, our minds must be the hands, the feet, and mind of God Almighty. That we must do the work, and whatever we do it must be in keeping with the building of what he called the Beloved Community, of what some of us may call the kingdom of God here on earth.

You were so young. That must have been key to your spiritual development.

Martin Luther King Jr. had a major impact on my search for truth, on my search to become a better human being and try to do what I consider the will of God. When you heard Martin Luther King preach, whether it was at a pulpit in Montgomery, Alabama, at some little church in the backwoods of Mississippi or southwest Georgia, or from his church in Atlanta, it was a message that was so moving and so powerful that you had to be willing and prepared to act according to that message.

As you look at your life now, how do you see all of that?

When I look back and even consider where I am today, if it hadn’t been for the teaching and preaching of Martin Luther King Jr., for getting that early foundation in the church, I probably wouldn’t be here. I don’t know where I would be. I probably would’ve got lost maybe in a sea of despair, maybe become very bitter and hostile. But, in a sense, the movement, Martin Luther King Jr., and these other religious leaders who led the civil rights movement, they not only rescued many of us but they also saved us and made us better human beings.

You went through so much. How did you move beyond that without becoming paralyzed by hatred?

At a very early stage of the movement, I accepted the teaching of Jesus, the way of love, the way of nonviolence, the spirit of forgiveness and reconciliation. The idea of hate is too heavy a burden to bear. It’s better to love. When we were involved in the sit-ins, in the freedom ride, on the march from Selma to Montgomery, we were not struggling against people but against customs, traditions, a bad way of life, and we were trying to win people over and be reconciled to each other. I think I had maybe what I call an executive session with myself, and maybe an executive session with God Almighty, and said, “I’m not going to hate. I don’t want to go down that road. I’ve seen too much hate, seen too much violence. And I know love is a better way.” You feel so different, and you feel so much better. You sleep better. You rest better. When you don’t have any ill feelings, you don’t have any hate or malice to people who maybe arrested you, beat you, jailed you, or tried to kill you. We all are brothers and sisters, we’re all a part of the same family, we all live in the same house — the house of faith.

But was it a struggle to get to that point?

When you look today at the nation and some of the issues we are battling, how are the religious communities and leadership rising to the challenges?

On so many occasions during the past two years I wished and prayed and somehow want to go back 40 years ago when the ministers, priests, rabbis, nuns, bishops, and others stood up. And sometimes I feel today that maybe, just maybe, the religious leaders are too quiet. They need to make a little noise. Need to push and to pull and [need] to be prophets. You know, Dr. King and others had the ability, had the capacity to rally people, to get people together. I will never forget, after Bloody Sunday in Selma in March of 1965, after we had been beaten and tear-gassed and trampled by horses, two days later, more than a thousand religious leaders — priests, rabbis, nuns, ministers — came there. Not just to Selma, but they got in the streets of almost every city in America, at the Department of Justice, at the White House, preaching the good news.

Today on some of the big issues, moral issues, [it] seems like we been so silent. Somehow we need to find a way to reclaim our position as people of faith. We don’t need to sort of give up, or give out or in, or get lost in a sea of despair, become discouraged; we just need to get out there. When I was growing up, my mother and father and grandparents used to tell us, “Don’t get in trouble. Don’t get in the way.” But during the ’60s, the religious community got in trouble. We got in the way. And it’s time again for the religious community to get in the way. To get in trouble. Good trouble, necessary trouble.