BOB ABERNETHY, anchor: For members of the clergy, providing spiritual care for their congregants is a role they are well prepared for. But providing spiritual care to the sick can be a different sort of challenge. In the nation’s capital, the Washington Hospital Center offers clergy special training sessions for a special kind of sick person: the patient with cancer. Judy Valente reports.

JUDY VALENTE: It’s not uncommon for Reverend Loretta Johnson to awaken to calls in the middle of the night from congregation members who have just been taken to the hospital.

VALENTE: The first person they think of often is their pastor or priest, their rabbi, their imam. 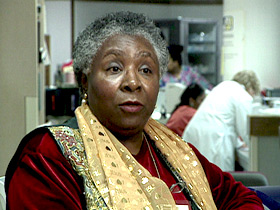 Rev. JOHNSON (Talking to patient Steven Barr): You are Steven?

STEVEN BARR (Patient): I am.

Mr. BARR: It’s a pleasure to meet you.

Rev. JOHNSON: It’s a pleasure to meet you.

VALENTE: Among the toughest cases she encounters are those of patients diagnosed with cancer.

Rev. JOHNSON: Most people don’t want to discuss the “C word,” because with the “C word” comes the fear of death, the fear of not being able to finish things that they have started.

Mr. BARR: I was completely healthy on December 20 and thought I had the flu, fever. A couple of weeks later, I ended up in the emergency room and they said I had a belly full of tumors, essentially.

VALENTE: When his doctors in San Francisco said there was little they could do for Barr, the 51-year-old father of a 5-year-old daughter decided to look elsewhere. He found a surgeon on the Internet at DC’s Washington Hospital Center Cancer Institute willing to take on his case. 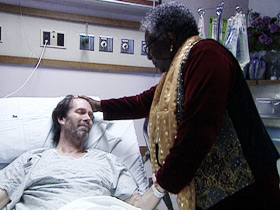 Rev. JOHNSON: Anything particularly that you are going to start doing now that you had been putting off?

Rev. JOHNSON: Can I have a prayer with you?

Mr. BARR: I would love that.

Rev. JOHNSON: Lord, we give you thanks for your son Steven.

Most of the time they pray because they believe God is going to answer their prayer. But I try to help them understand the answer may not come in the form that you want, so the healing of the cancer may not have come in the sense of getting rid of the cancer of the colon, but maybe in the process, the softening of the heart, the way we see things are changed or improved.
Amen.

VALENTE: 9.6 million Americans alive today have experienced some form of cancer. Often they seek support from their pastor or rabbi. But many religious leaders say they feel ill prepared to provide the kind of spiritual care cancer patients need. 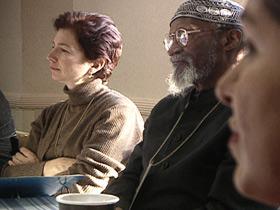 To better prepare clergy and lay leaders, Washington Hospital Center offers a three-day intensive training program that attracts a diverse religious group. Its goal is to help them better understand what cancer patients endure. This rare glimpse into the world of a cancer patient includes a crash course in the causes and treatments of cancer.

Sister GLORIA SCHULTZ (Oncology Chaplain, Washington Hospital Center): There are all sorts of losses that they face along the way, and there’s grieving that takes place along different levels. Then as treatment starts, they are going to lose their hair, in some cases; they lose some of their physical abilities, their strength — they need to grieve all those pieces as well.

VALENTE: And the spiritual caregivers are deeply involved in that process. They give patients a safe environment in which they can reflect on their illness, their fears, and how it affects their faith.

Rev. JOHNSON: I think the key for the pastor is to be able to be present with the patient, and many times you don’t have to offer anything except your presence. You don’t always have to have the answers.

VALENTE: Estefania Gonzales-Saldana has lost one kidney and part of her colon to cancer and is awaiting her tenth surgery for tumors that have now spread to her stomach and pelvic area. Her faith, Estefania says, sustains her. 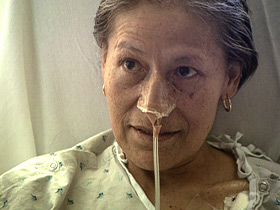 ESTEFANIA GONZALES-SALDANA (Patient, Washington Hospital Center): My sister said to me, “I don’t believe you are sick.” I said, “Why?” “Because you act like you are not sick.” I said, “Because God is with me all the time. He loves me.”

VALENTE: But even Estefania sometimes questions a God who would allow the ravages of cancer.

Ms. GONZALES-SALDANA: Why the young people getting this disease — kids? They have leukemia, different kinds of cancers — why?

Rev. JOHNSON: God never said that we would have everything on an easy plane, but he did say no matter what you go through, the good and the bad, the joy and the pain, I will be there in the midst of it with you.

Do I believe that God is standing in some great big theological cathedral saying, “I’m going to dish this kind of suffering to her and another kind to someone else?” No, I don’t think God does that at all. Cancer is proof that life has some complications. If we can accept God in the joyous times, then we ought to be willing or we have to learn to accept God when the times are not as joyous.

VALENTE: A key part of the program is for the group to witness cancer surgery firsthand. 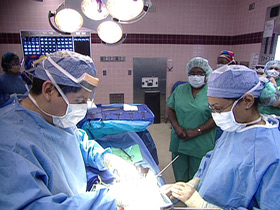 Sister SCHULTZ: It’s one thing to talk about somebody’s surgery or a past experience that they’ve had. It’s a whole other piece to stand in that operating room and to see the reverence with which the body is prepared.

MARK STEVES (Washington Hospital Center): This is kind of rougher in texture, and you could see this white stuff. That probably is visible cancer. This is a cancer, a biopsy-proven cancer in this 51-year-old man.

Now we are going to prepare the other side to be divided, and we are going to take the two ends and put them together. So, simplistically that’s what most surgery is, dividing and putting them back together.

VALENTE: Surgery was challenging for some of the members of the group.

In the operating room next door, surgeons allowed participants to actually touch a tumor extracted from a 21-year-old woman.

Reverend PAM GOODWIN (Universalist): So to actually stand there with this young woman, with the doctors, and to touch her cancer, it felt like touching her soul.

VALENTE: The group also got a sense of how difficult treating cancer can be for the doctors, emotionally.

Dr. STEVES: I’ve seen a lot of ugly cancers in a lot of people, including my own family, my own in-laws. It can be a very tragic thing. 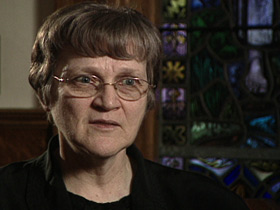 VALENTE: A final destination for the group is a trip to the hospital’s cramped and dark morgue.

Sister SCHULTZ: I think just walking into that morgue, seeing the dead bodies, the reality that some people survive now but ultimately we are all going to die, it brings us into that experience.

VALENTE: Pam Goodwin and Rev. Johnson return to visit Estefania before she goes into a difficult surgery.

Ms. GONZALES-SALDANA: That’s why I’m now very happy to go into the surgery room, because I know that the angels and God are going to be there with me. Amen, amen.

Rev. GOODWIN: You are such an inspiration. Here you are ready to go into surgery in several hours, and you seem at such peace; there’s a grace about you.

Rev. JOHNSON: You have encouraged my soul today.

VALENTE: Dr. Steves says she will survive her surgery, but she still faces a difficult battle.

VALENTE: For Estefania, physical healing may not be a possibility, but she was able to achieve a spiritual peace throughout her illness. 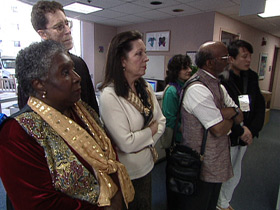 These participants, like others before them, said they felt changed by knowing what cancer patients endure, and they will be better spiritual caregivers because of all they witnessed.

Imam GHAYTH KASHIF (Masjid Masjidush-Shura): What I’ve learned through this whole process will help me be able to bring people together to help them deal with these woes of life.

Cantor MARK NOVAK: The hospital is a setting in which miracles happen every day. I learned that beauty surrounds us even in the midst of suffering and pain. I’ve learned there’s much to be learned.

VALENTE: In one of their last sessions, Cantor Novak led the group in a song that he wrote summing up their experiences.

Cantor NOVAK (Singing): I believe in you, my friend, every hour of the day, and catch me when I’m falling.