BOB ABERNETHY, anchor: In addition to Holy Week for Christians, for Jews the eight-day celebration of Passover begins with the Seder Monday night (April 5). We talked about the food of the Seder with cookbook author Joan Nathan.

JOAN NATHAN (Author): Passover is my favorite holiday. It is not only the narration of the exodus of the Jews from Egypt, from slavery to freedom, but it’s also a celebration of spring.

Not only does it link us to Egypt, to Israel, to the land of Israel, but it also links us to our own generations. For example, at my own Seder we have many recipes that my late mother-in-law made from Poland. 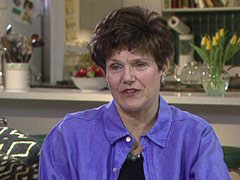 In the Book of Exodus, it tells us that during Passover, during eight days, you should not use any leavened items and leavened bread. Today it would mean pizza, pasta, corn, beans, rice, even mustard seed — things that are leavened or fermented.

Every single food — that’s the other thing — on the Passover Seder plate has a dual symbolism and probably a tri-symbolism that makes it even richer, because it’s something you can talk about.

On the Seder plate, there’s the harosset, which is one of my favorite parts of the Passover meal, which is a paste made out of fruit and nuts. It symbolizes the mortar that the Jews used when they were slaves in Egypt.

I know of maybe a dozen different harosset recipes from all over the world, and at my Seder I have at least five because I think it’s a way of teaching the diaspora, how Jews wandered.

And there’s the parsley which you dip in salt water — again parsley, a symbol of spring; salt water, symbol of the tears people shed even for your enemies that you had to kill to get to freedom. 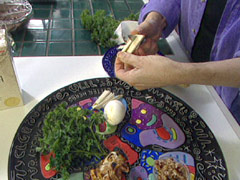 “Marorra,” which means bitter — and it was greens like Romaine lettuce or arugula — that’s what grows in the desert, not horseradish. Horseradish is Eastern European, and they all mean — again, they are symbols of the bitterness of slavery.

There’s a roasted egg, and the roasted egg symbolizes not only the sacrifices in the temple but also the circle of life.

Matzoh is made from water and flour — sometimes salt, but that’s it. The Jews were in Egypt; they didn’t have time, they were given a short time to leave, they didn’t have enough time for the bread to rise, and so symbolically you eat the unleavened bread, which is the bread of slavery, but it’s also the bread of freedom.

What always amazes me is that Jews all over the world are celebrating at the same time the same holiday in different ways.

At every Passover Seder, when everything is done and we are about to start, I feel better than at any time of the year. Even if I’m more tired. I feel as if, not only I made a good meal, but that I incorporated history and culture. And my family is there, my entire family. No matter where they are, we make sure that they come home. And it really means a lot.

From JEWISH COOKING IN AMERICA by Joan Nathan (Alfred A. Knopf, 2001)

Tip: Try adding a jar of sun-dried tomatoes to the canned tomatoes. They add a more intense flavor to the brisket.