BOB ABERNETHY, anchor: As an evangelical, President Bush has often spoken about trying to do God’s will in the world. We put together a few samples.

President GEORGE W. BUSH: God has planted in every human heart the desire to live in freedom. …

Freedom is the Almighty’s gift. …

God’s gift to every human being. …We understand our special calling. This great republic will lead the cause of freedom. …

It is not carried forward by our power alone. We can trust in that greater power. …

In the loving God behind all of life and all of history. May He guide us now. …

ABERNETHY: Here to talk about the president’s sense of mission are Richard Cizik, vice president of the National Association of Evangelicals, and Robert Franklin, professor of social ethics at Emory University in Atlanta. 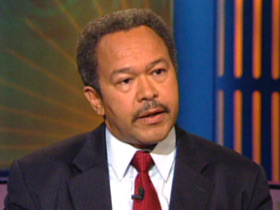 Dr. Franklin, when the president says he is trying to be a messenger of God’s will and speaks about the Almighty — what is the matter with that? Isn’t that what all Christians are supposed to do?

Dr. ROBERT M. FRANKLIN Jr.: (Professor of Social Ethics, Emory University, Atlanta, Georgia): Indeed, all Christians should seek to fulfill God’s will, and I believe this president is sincere as he says those words. But, I feel that that language comes frighteningly close to placing the current military conflict in a religious framework. And that, I think, is likely to fuel anti-American and anti-Christian sentiments — certainly in the Muslim world.

ABERNETHY: Richard Cizik, any problem for you?

Reverend RICHARD CIZIK (Vice President, National Association of Evangelicals): Robert, I disagree. I’ve just come back from Morocco, where when we as evangelicals reference God, the Muslims in Morocco said, “We understand you.” The president was simply saying, “I acknowledge a higher power, a higher Father. I go to him.” If he didn’t in these times of war, that’s what would concern me. …

Dr. FRANKLIN: You are only half right …

Dr. FRANKLIN: … and, we are not at war with Morocco. We are at war with nations and groups, rather, that I think are exceedingly angry with our nation and its Christian referencing.

ABERNETHY: Richard, this is a pluralistic country …

ABERNETHY: … Christian overwhelmingly, but lots of other religions represented, lots of people of no religion. And many of them get uneasy with the kind of language that the president has used. What do you say to them? 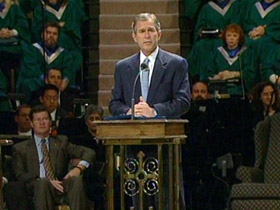 Rev. CIZIK: Well, to those who don’t share all of his beliefs, I would simply say presidents have always played that role. Lincoln the prophet: “A nation divided [against] itself cannot stand.” FDR: “We have nothing to fear but fear itself.” The CHALLENGER and COLUMBIA explosions. Presidents have played that role of prophets, priests. These are roles presidents play, and we are comfortable as Americans with it. This is the nation with a soul of a church, right, Bob?

Dr. FRANKLIN: Well, I think we need our president at this unusual time in history to be an educator — to educate the American public about how we live with our deeply held religious differences.

ABERNETHY: Do you see any conflict or potential conflict between trying to do God’s will and upholding, on the other hand, the Constitution of the United States?

Rev. CIZIK: None whatsoever. I don’t see any conflict. None. Neither did the framers. Now, presidents can’t pursue a sectarian religious agenda, certainly not. But this president isn’t doing that. He’s affirming, in fact, the highest of our ideals. He’s saying, “Let’s address poverty, oppression, famine, disease in Africa, genocide in Sudan, [sex] trafficking.” He talks about our deepest values at the United Nations. That’s incredible.

Dr. FRANKLIN: I agree. He does articulate those ideals quite well. But the problem with the history of the American experiment with our Constitution hasn’t been articulating the ideals. It’s been fulfilling the reality of those.

Dr. FRANKLIN: And the problems with slavery and Jim Crow and so on remind us of the hypocrisy. And I think much of the world is looking on and saying, “Gee, Americans speak a good game, but their actions on the ground betray those high ideals.”

ABERNETHY: Richard, let me ask you about the idea of discernment. Many Christians, many religious people find this a very difficult thing, to be sure that what you think is God’s will really is. Isn’t there a danger that a president, particularly with all his power, could come to believe that something was God’s will when it might not be? 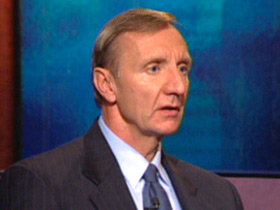 Rev. CIZIK: That’s absolutely right. Our best of motives can be pursued by actions which are immoral and result in consequences that were never intended. That’s why the president has multiple advisors. That’s why we should pray for him. That’s why the Congress is involved. So the president just doesn’t hear a word from God and take us to war. God help us if that ever happens.

Dr. FRANKLIN: But whenever the president invokes God language as he talks about American foreign policy, I think it would be helpful for him to speak with greater humility and to say, “As we pursue these ideals, we recognize that we could be wrong; we could miss the mark in certain areas, and we do pray for God’s guidance and light.”

Rev. CIZIK: Yes, I for one don’t think the president should be afraid of saying, “Look, I assume as commander in chief for the safety of this nation, its security,” and to those who lost lives on 9/11, I don’t see why the president can’t say, “I’m sorry. I’m sorry it happened.” He won’t.

Dr. FRANKLIN: Good to hear you say that.

Rev. CIZIK: But I think he should be able to.

Rev. CIZIK: Why not? It would be cathartic.

ABERNETHY: And quickly, any difference here between the kinds of speech from the civil rights movement, which was very religious, and this now?

Dr. FRANKLIN: I think this is different because it is a president presiding over a religiously diverse nation. And that was a movement that was attempting to fulfill those ideals.

ABERNETHY: Many thanks to Robert Franklin of Emory University in Atlanta and Richard Cizik of the National Association of Evangelicals.