BOB ABERNETHY, anchor: This week, the second in our series on America’s evangelicals. Today, evangelicals and politics, an issue back in the news since President Bush’s recent press conference, in which he seemed to some hearers to equate his policies in Iraq with God’s will.

President GEORGE W. BUSH: I also have this belief, strong belief, that freedom is not this country’s gift to the world; freedom is the Almighty’s gift to every man and woman in this world. And as the greatest power on the face of the Earth, we have an obligation to help the spread of freedom.

ABERNETHY: Independent presidential candidate Ralph Nader said Bush was mixing religion and policy, and called him a “messianic militant.” Bob Woodward, in his new book, PLAN OF ATTACK, about the decision to go to war in Iraq, quotes the president as saying he did not pray “to justify war based upon God,” but did pray that “I be as good a messenger of his will as possible.” 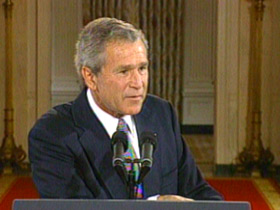 More coming up on Bush, God, and policy. First, more in our series on America’s evangelicals.

But there were some surprises, too, as Lucky Severson reports in Part Two of our series on America’s evangelicals — “Evangelicals and Politics.”

LUCKY SEVERSON: This is Grabill, Indiana, Congressman Mark Souder’s hometown. He grew up here among the Amish, whose buggies continue to populate the streets and slow down people in a hurry to get somewhere.

Souder now owns what was once the central business district of Grabill, including the family grocery, now filled with curios and memories.

Rep. MARK SOUDER (R-IN): One of my jobs when I was still in elementary school was to take a black marker and black out “devil’s” on devil’s food cake, because my uncle said that nothing that tastes that good should be named after the devil.

SEVERSON: This is the Apostolic Christian church Souder attended as a kid, a very conservative evangelical church.

Rep. SOUDER: I’ve never danced in my life. I’ve only been to a few events where they even had dancing.

SEVERSON: When he first came to Washington as a congressman in 1994, he was concerned about hanging on to his evangelical Christian values.

Rep. SOUDER: I thought Washington, DC, if it wasn’t hell, it was a suburb of hell.

SEVERSON: But Congressman Souder is not a voice in the wilderness. There are dozens of evangelicals in Congress, a reflection of the growing strength of evangelical voters around the country.

According to our poll, an overwhelming number of all white evangelicals, 70 percent, are Republican or lean toward the party that now occupies the White House. The one reason more than any is abortion, which has been and still is a defining issue for most evangelicals. 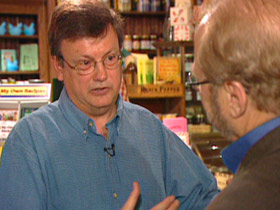 Rep. SOUDER: I believe that the beginning of life is absolutely clear in the Bible.

SEVERSON: Many white evangelicals believe moral values, the issues our poll found concern them most, come from a literal reading of the Bible. Therefore they are non-negotiable.

Rep. SOUDER (On the House floor, holding his Ten Commandments plaque): We can put these in our offices, but apparently they are too dangerous for our children.

SEVERSON: But not all evangelicals share the same view on abortion or politics. Most African Americans, who make up 15 percent of all evangelicals, vote Democratic, as do most evangelical Hispanics. Our survey found the issues that matter most to African-American and Hispanic evangelicals are the economy and jobs.

SEVERSON: Tony Campolo is a professor of sociology at Eastern University. He is an author, a Baptist minister, an evangelical, and a Democrat.

Dr. CAMPOLO: We vote Democratic not because we are totally in agreement with our party allegiance, but because it seems to be more slanted in the direction we want to go.

SEVERSON: Many evangelicals have broader concerns than just abortion and gay marriage. Shaun Casey is a professor of Christian ethics at Wesley Theological Seminary.

Dr. SHAUN CASEY (Professor of Christian Ethics, Wesley Theological Seminary): The issues that concern evangelicals look a lot like the issues that the average American is concerned about — the economy, Social Security, the viability of Medicare, the war in Iraq. In that sense evangelicals are very mainstream America, I think.

MARGARET COATS (Member, United Brethren Church): I think that it’s important to be involved in politics, because what I believe and what I value — I would like to share that with others.

MIKE KINZER (Member, United Brethren Church): Christ called to us to be the salt of the Earth and light to the world. And to be salt you need to be in the world, not necessarily of the world — so part of that is politics. 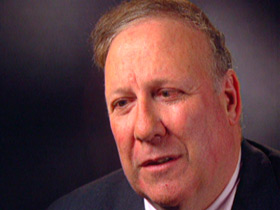 SEVERSON: Historian Leo Ribuffo says we may be hearing more about it now, but that political engagement is nothing new to evangelicals.

Dr. LEO RIBUFFO (Historian, George Washington University): The period of the 19th century is a very intense period of evangelical activism in politics — the move to be brought under God, under the Constitution; serious efforts in morals legislation, Prohibition being the most famous. So in that sense, there is nothing new about evangelicals being active in politics.

SEVERSON: Beginning in the 1930s, evangelicals largely withdrew from politics and stayed on the sidelines until the 1960s.

Dr. CASEY: For the first time, the Republican Party turned to evangelicals and said, “For religious reasons you need to vote for us and against John Kennedy, because if a Catholic becomes president, you’re going to lose religious freedom, which we hold so dear.”

SEVERSON: The raucous counterculture of the 1960s, from rock ‘n’ roll to sexual liberation, offended evangelicals, as did the Supreme Court decisions banning prayer in public school and legalizing abortion.

Rep. SOUDER: I believe that the fundamental change in America was the legalization of abortion.

SEVERSON: The 1976 campaign of Jimmy Carter, a fellow evangelical, encouraged evangelicals to get even more involved in politics. But it was the next president who galvanized evangelicals. 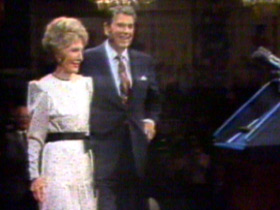 SEVERSON: Evangelicals supported the first President Bush, and even a third of them voted for fellow evangelical Bill Clinton, although many voted against him. But perhaps no president has reached out as convincingly as George W. Bush.

George Bush is a Methodist, but he’s a thoroughgoing evangelical Christian. And I’m grateful for his life of prayer and his faith and his testimony for Christ.

Dr. CASEY: If you look at how President Bush reached out to evangelicals in the 2000 race, when he talked about values in mainstream media, he used a much softer kind of rhetoric. He talked not about abortion, not about being against gay marriage per se, but he spoke in a milder code to signal that he knew evangelicals. He walked their walk, he talked their talk.

SEVERSON: He pushed faith-based programs, appointments of evangelicals in high places, the ban on partial-birth abortions — and under pressure from evangelicals, funding to prevent and treat AIDS. The list goes on.

Ms. COATS: When George Bush became president, I felt that was a great change for integrity and the moral part of the country.

Mr. KINZER: I think President Bush is doing a good job and I like his consistency.

SEVERSON: Some observers have suggested that one reason President Bush and Britain’s Prime Minister Blair have gotten along so well is because both are evangelical Christians.

The war in Iraq had strong support from evangelicals, but Professor Shaun Casey says it is not unwavering support.

Dr. CASEY: A lot of evangelicals supported the war, thinking our troops were going to be welcomed as liberators when they came into Baghdad — and here we are a year later. The war is getting worse. So there is some ambivalence there.

SEVERSON: Even Congressman Souder, who still supports the decision to go to war, may be running out of patience. 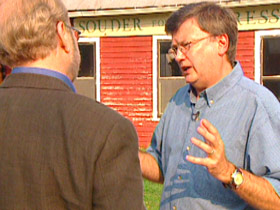 Rep. SOUDER: If the Iraqi people don’t take over more of the law enforcement and make us do the fighting and dying, I won’t support them for more than another year.

SEVERSON: Some say it’s with the Bush administration’s foreign policy that evangelicals have been particularly influential — pushing for a harder line on human rights with China, North Korea, the Sudan, and especially to stand squarely behind Israel.

Rep. SOUDER: They’re God’s chosen people. And he gave, in the Old Testament, Israel to the Jews, more or less, right or wrong. And I’m going to stand with Israel.

Dr. CAMPOLO: There are some evangelicals who buy into these LEFT BEHIND books that are now the rage of the day, that suggest that Jesus can’t return to Earth unless all the Arab peoples are driven out and the temple is rebuilt, which has of course no biblical basis whatsoever. I contend that Bush would be a lot more moderate if there weren’t some fundamentalists breathing down his neck.

SEVERSON: In the past, it’s been the Jerry Falwells and Pat Robertsons who often motivated evangelicals to vote, but times are changing.

Dr. RIBUFFO: Many evangelicals are skeptical of polarizing figures like Falwell or Robertson. But there’s still a grassroots fundamentalist evangelical culture out there that has a strong conservative tilt.

SEVERSON: Evangelical Tony Campolo says the conservative tilt toward explosive moral issues has come at the expense of what should be evangelicals’ main concern — serving the poor. 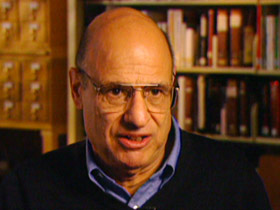 Dr. CAMPOLO: I think that many evangelicals have re-created God in the image of a White Anglo-Saxon Protestant Republican. And they end up worshipping a God that is an incarnation of their own values. The reason why I buy into the Democratic Party more than the Republican Party is because there are over 2,000 verses of Scripture that deal with responding to the needs of the poor. Note: 2,000 verses.

SEVERSON: Souder disagrees that evangelicals aren’t actively involved in helping the poor. This is a gathering of Ft. Wayne evangelical leaders who have contributed service and money to help the inner city’s needy. But Souder agrees that caring for the poor will likely not be the rallying cause that gets evangelicals out to vote in 2004.

Rep. SOUDER: I agree that at times conservative Republicans will find things that work to their purposes to activate the conservative religious voter.

SEVERSON: Historian Ribuffo says the Republicans have a lock on the evangelical vote this year.

Dr. RIBUFFO: I can’t see anything that would change that in the foreseeable future, short of some extraordinary disaster such as the Great Depression.

SEVERSON: But Shaun Casey says Democrats shouldn’t write off evangelical voters, because some may be losing faith in the current president.

Dr. CASEY: There has been no progress on abortion. Washington still remains as deeply divided on a partisan basis as anytime in memory, and the economy has not improved. They have felt the disappearance of jobs. They have felt the decline in manufacturing. There is a significant percentage of evangelicals who are now willing to take a look at the other guy in a way that three years ago was probably not conceivable.

SEVERSON: According to our survey, George W. Bush would draw more than two-thirds of the white evangelical vote if the election were held today.