BOB ABERNETHY, anchor: The debate over abortion and Catholic politicians has focused on Senator John Kerry and his campaign for the presidency, but it affects all Catholic public officials who are pro-choice. A panel of Catholic bishops is studying what the Church's response should be. It is led by Cardinal Theodore McCarrick of Washington, DC, who says he would not be comfortable denying them the Eucharist. A new ad campaign by an antiabortion Catholic group said McCarrick's words would be "cold comfort for the 1.3 million babies surgically aborted every year."

Now, correspondent Lucky Severson looks at the challenges faced by Catholic politicians, past and present.

LUCKY SEVERSON: In October 1960, John Fitzgerald Kennedy, the Catholic candidate for president, drew the line as to how he would deal with his religion as president. 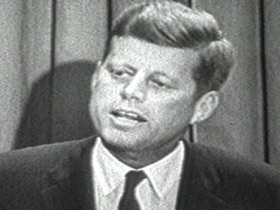 JOHN F. KENNEDY: I am not the Catholic candidate for president. I am the Democratic Party's candidate who happens also to be Catholic. I do not speak for my church on public matters and the Church does not speak for me.

SEVERSON: Now, over 40 years later, another Catholic presidential candidate with the same initials -- John Forbes Kerry -- is under intense pressure to support his church's position or be punished.

JOSEPH STARRS (American Life League): If Senator Kerry and company insist on supporting abortion then they should have the moral integrity not to receive Holy Communion. To do otherwise is an arrogant repudiation of the church they claim membership in.

SEVERSON: Joseph Starrs is with a conservative Catholic organization called the American Life League. He is serving notice, not only to candidate John Kerry but to every other Catholic lawmaker who doesn't vote against abortion -- threatening denial of an important sacrament through which Catholics receive grace.

The league's views are less forgiving than those of many Catholics. But the notion of holding politicians accountable is gaining momentum. Ambassador Raymond Flynn says it's about time so-called "cafeteria Catholics" toe the line. Flynn is a former mayor of Boston and was the U.S. ambassador to the Vatican during the Clinton administration.

RAY FLYNN (Former U.S. Ambassador): I've heard the Holy Father on a number of occasions say that Catholics as elected officials must accept political responsibility, they must be faithful Catholics, and quite frankly, I agree with him. 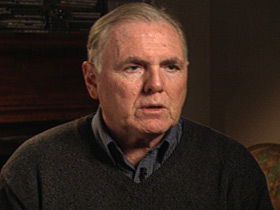 MARIO CUOMO (Former Governor, New York): One of the reasons the country was created was for me to be free to be a Catholic and you to be whatever you wish to be. In order to protect that freedom of religion, you must be careful not to intrude upon other people's freedom of religion. For me to be protected in my right to be against abortion and against contraceptives, I have to make sure not to tread upon your right not to believe in those things, because if I can impose my religion on you, you can impose your religion on me.

SEVERSON: Much has changed since the 1960 JFK speech. The Supreme Court has legalized abortion. And antiabortion forces are gaining votes and political influence. But of the 150 Catholics in Congress, more than 70 have cast pro-choice votes.

Mr. FLYNN: You can't say you are a Catholic on Election Day and then go up to the statehouse, city hall, the Congress, and vote any way you want. You have to be accountable.

SEVERSON: Until recently, the Church has often looked the other way when politicians voted pro-choice -- until last year, when a Vatican doctrinal decree declared that Catholic lawmakers have a "grave and clear" obligation to oppose any law that attacks human life. Some American Church leaders, including the newly appointed Archbishop of St. Louis, Raymond Burke, interpreted the pronouncement as an ultimatum. He said he would deny Communion to pro-choice lawmakers, including John Kerry.

This is Raymond Burke, earlier this year, on Catholic television when he was still bishop of La Crosse, Wisconsin.

Reverend RAYMOND BURKE (Archbishop, St. Louis): Any legislator who is publicly supporting laws which favor abortion or euthanasia may not present himself or herself for Holy Communion. 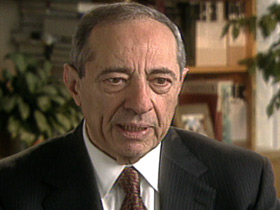 Mr. CUOMO: Do I, as a Catholic, think it's extreme? Of course I do. The consecration, the making of the bread and wine into the body and blood of our Savior, is the ultimate religious act for Catholics. And participating in it is the ultimate participation. It's the reason I wrote the speech in 1984 on this subject.

SEVERSON: It was, for the time, a defining speech responding to a veiled public threat of possible excommunication from then Cardinal John O'Connor. It was directed at Cuomo and vice presidential candidate Geraldine Ferraro.

Mr. CUOMO: It went through me like a blade, and that's when I did something that no Catholic did before.

(Giving Speech): The Catholic public official lives the political truth most Catholics, throughout most of American history, have accepted and insisted on: the truth that to assure our freedom, we must allow others the same freedom, even if occasionally it produces conduct by them that we would hold to be sinful.

SEVERSON: That was 20 years ago. If Cuomo were governor today, he might be denied Communion.

Rev. BURKE: I'm not telling these legislators how to vote, I'm telling them how to form their conscience as Catholics. And they have to draw their conclusions from that, and if they want to remain a good Catholic, they know how they should act.

SEVERSON: But not all Catholics support the archbishop's edict, including Raymond Flynn, an advocate for more discipline.

(To Mr. Flynn): Do you think that these politicians should be denied Communion?

Mr. FLYNN: No, I don't think that's a decision that I should make and I don't believe that should happen, but I would say, however, that there should be some level of discipline.

Mr. CUOMO: I suspect that it will not hurt John Kerry, but it may hurt the Church, and that troubles me. 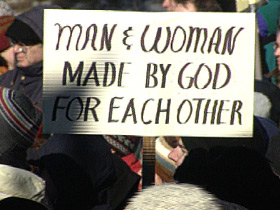 Others under the gun include Governor George Pataki of New York and California Governor Arnold Schwarzenegger, whose predecessor, Gray Davis, was ordered by his bishop to change his views or stop receiving Communion. We requested interviews with several Catholic lawmakers and they all respectfully declined -- a sign of how sensitive the issue has become.

Even though some bishops have spoken out against pro-choice politicians, polls have consistently found that the views on abortion of a majority of Catholics are pretty similar to those of most Americans.

Mr. CUOMO: On abortion, the numbers show regrettably, tragically, that Catholic women ignore the teaching on abortion as much as any other part of the population.

SEVERSON: But what about other pronouncements from the pope, such as his strong and vocal opposition to capital punishment?

Mr. FLYNN: The Holy Father made a statement on capital punishment that was unequivocal. He was unalterably opposed to capital punishment at all, definitively. There were very few clergy in the U.S. re-echoing what John Paul II had said, and I was sitting five feet from him.

SEVERSON: Former Governor Cuomo took a lot of heat for his position against capital punishment and wondered why the Church did not stand behind him.

Mr. CUOMO: Twelve years I was against the death penalty. I wrote to the Vatican. I said, "Give me a break. Help me here."

SEVERSON: The next battle for the votes and souls of Catholic politicians is shaping up in Massachusetts, where the Church is taking on same-sex marriage. Archbishop Sean O'Malley of Boston.

Reverend SEAN O'MALLEY (Archbishop, Boston): If we redefine marriage, I can predict to you in 10 or 20 years, many more children will be born out of wedlock, many more divorces will take place, fewer people will be getting married.

SEVERSON: This is one of several rallies against a Massachusetts State Supreme Court decision that not only upheld but mandated same-sex marriage -- a decision state Senator Marian Walsh supports. 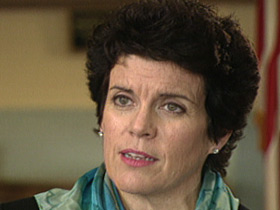 (To Senator Marian Walsh): Have you had a lot of pressure on the gay marriage issue?

Senator MARION WALSH (D-MA): A lot of pressure. It has been the most chronic and intense outreach to me and my staff that I have ever received.

SEVERSON: From the Church?

SEVERSON: Walsh is a graduate of the Harvard Divinity School and a lifelong antiabortion Catholic. But she says she can't abide by the Church's position on same-sex marriage. And she's troubled that the Church that has always struggled for social justice is now, in her view, working against it, and against her conscience.

Sen. WALSH: This is not a boardroom where I'm to toe the line. They are to guide me and inform me to the best of their ability. But it's my private relationship with Jesus Christ that I follow my conscience.

SEVERSON: She is particularly upset that the Church has spent a million dollars promoting a constitutional amendment banning same-sex marriage.

Sen. WALSH: I never heard from the Church when children were being systematically raped. The abuse was facilitated and then covered up. It really gave me question as to the moral corruption of the Church.

SEVERSON: The sex abuse scandal has caused both Catholics and non-Catholics to question the Church's moral authority, according to Raymond Flynn. That's one reason he now heads an advocacy group called Your Catholic Voice.

SEVERSON: Catholics comprise about 30 percent of Americans who vote in national elections, and they can be a potent force. They will be courted by both President Bush and John Kerry. And seven-term Senator Walsh believes the Catholic vote will be a significant factor in her next election.

Sen. WALSH: I believe that the Church will do all they can to help someone else win this seat. But the same Church gave me the confidence, the humor, the tools to question authority, to ask myself, "What would Christ do, where would he be in this debate?" The Church gave me that. The Church taught me not to be afraid to stand alone.

SEVERSON: Now, because of her pro-gay marriage position, Senator Walsh finds herself in the same increasingly uncomfortable place as pro-choice Catholic lawmakers throughout America -- caught between the strongly held views of some Church leaders and her own convictions. I'm Lucky Severson for RELIGION & ETHICS NEWSWEEKLY.