BOB ABERNETHY, anchor: As scores of gay couples were legally married this week in Massachusetts, many other homosexuals sometimes face agonizing choices between their sexual orientation and their religion.

We have a story today about a gay Orthodox Jew struggling with that seemingly impossible choice. It’s one of several such stories in a documentary feature film released three years ago and directed by Sandi Simcha Dubowski. The title of the film is TREMBLING BEFORE G-D.

DAVID (Orthodox Jew): I don’t want to be less than a Jew because I’m gay. The equation I had in my head was Judaism is correct. Judaism states that homosexuality is wrong. And I am homosexual — then Judaism must have the answer. 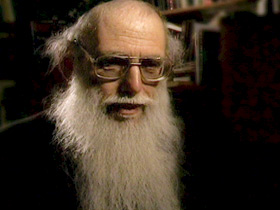 Rabbi AHARON FELDMAN: You can’t lie to someone. You can’t tell a person that he can be a religious Jew and violate one of the mitzvot for which the Torah prescribes the death penalty and calls it an evil — calls it an abomination.

God says that homosexuality is forbidden. And this is a revolt against God. God is directly punishing us because he brings us sickness that goes directly through him. They are immoral people, these people. They are people that have to break down all the barriers of what they grew up with.

DAVID: When I grew up I didn’t think you could be any more religious than what I was. We kept Shabbos (Sabbath), we kept kosher, the holidays. I wore a yarmulke all the time. I davened (prayed) three times a day. And my dad growing up at the time, he was a Hebrew teacher. When I came out to my parents, I had an article about homosexuality in my jacket and my dad took my jacket to the cleaners, saw the article with homosexuality , and he said, “David, what is this?” And I didn’t know what to do — I was at a total loss. After about five or 10 minutes I went to my parents’ bedroom, and I told my parents that I was gay — but don’t worry, I was in therapy to change. “I am going to be all right. I am going to be straight. Everything is going to be fine.” 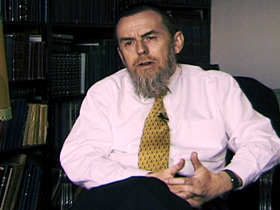 I spoke to this rabbi far from Chicago because I didn’t want anyone to know. I told him how I was gay and I needed and wanted to change, so he told me to eat figs or dates, I’m not sure which one. I think figs. And to say Tehillim (Psalms), like 10 different Tehillims I should say every day. So I did that for a couple of months. I ate dates and I said Tehillim. It sounds like I am an idiot, just talking about it. What the hell is this? But I did it. I would have done anything. I spoke to this therapist. He was into conditioning where you put a rubber band on your wrist and every time I would see a man that I was attracted to I would flick the rubber band. You know, aversive conditioning, I guess you would call it. So my wrist was hurting. I was constantly flicking this rubber band. And then I thought, I can’t do the rubber band because people would say why are you — so I had to lie about why I was wearing a rubber band. So he said, “Okay, bite your tongue.” I did that for two years. I thought that’s what I needed to do to rid myself of the homosexuality. You know, to be the Jew that I thought that I should be.

Rabbi Dr. NATHAN LOPES CARDOZO: Theoretically speaking, it would be better for the homosexual to live a life of celibacy. I would just argue one thing: it’s completely impossible. It doesn’t work. The human force of sexuality is so big that you can’t — it can’t be done.

DAVID: As the years passed, my parents said to me, “David, why aren’t you changing? I thought you were going to change.” And I also thought, why aren’t I changing? What’s going on here? And then I got to the point where I realized I wasn’t going to change. And that’s really, really hard for me, because I had to begin to accept the idea that I will not have children through a marriage. And that was really hard for me to accept, because I always dreamed of having kids.

DAVID: People are drugged. People have gone through electric convulsive therapy to purge their homosexuality. And I think all of these things are just horrible. It’s just, if you ask me, I can’t imagine halakha (Jewish law) sanctioning this. This seems so anti-halakha to me, to do these things to a human being. 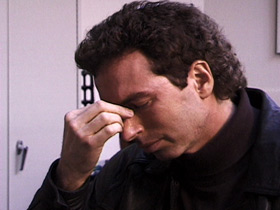 Right now I am just feeling some anxiety because I am about to meet with Rabbi Langer, and it is 20 years after the fact. I met him 20 years ago. He was the first person I ever came out to. The first rabbi, the first person. He told me, “You’re a Jew, we love you.” And then he told me to write a letter to the rebbi and to seek therapy. So I did all those things. So, here we are 20 years later. I spent 12 years trying to change.

DAVID: As you know, I flew out here 20 years ago to tell you that I was gay. Then you proceeded to tell me to write a letter to the rebbe and gave me the name of a therapist in Sunnyvale, California and also the name of someone you knew in Chicago that I could speak with. And needless to say, it wasn’t the best advice.

Rabbi LANGER: Are you still looking for ways, David — to change?

DAVID: I don’t think it’s possible. I can’t have sex with women. It’s just inappropriate. It’s like you having sex with men. I can’t. I just can’t do it; it’s not me. 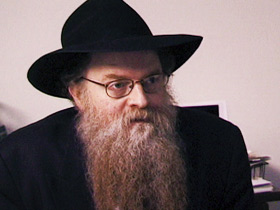 Rabbi LANGER: Unfortunately, you have to go through the heartache of being in this position — having these feelings and coming to grips with what God has to say about it. To have sexual relationships with another man is something that is a prohibition. I don’t blame you for wanting to have acceptance of something that is so much a part of your life and so, such an emotional part of being.

DAVID: Do I live my life alone with no partner, with no loving relationship? Is that according to — [is] this halakha? Is that the right way I have to live my life?

Rabbi LANGER: I have been taught that we are not given anything that we cannot have control over. It may not be easy sometimes.

DAVID: Must I live a celibate existence by myself with friends? Is that my lot? Is that what I am supposed to have in this life.

Rabbi LANGER: If you’re only inclined to have relationships, sexual relationships with men, and nothing else works for you, then yes, you have to be celibate.

DAVID: I wrote a note — and previous notes I have written — to ask God to help to change me. I ask God to “Please help me to be happy being who I am and being gay and being at peace with it. And I hope that, that You” — I wrote a capital “Y” — “that you should be pleased with me in this, in this respect.” I just want to know that I can have a relationship with Ha Shem, as a Jew completely — including this part of my being.