Why did you decide to get involved in the Hugh Finn case?

I was told that Michelle Finn was under some distress because she was getting all kinds of arguments from certain members of our Church, who said that she basically was committing murder. And it was suggested that I write to her, and I did. My intent was to say to her, “Michelle, the course of action you’re proposing” — that is, to withdraw food and liquid from your husband who’s in a vegetative state, and it is a permanent vegetative state — “that is within the course of acceptable theological opinion in the Catholic Church.” I didn’t mean to say that it was my opinion or the Church’s opinion she should do this. It was her choice. That’s very important to remember. She’s the responsible one for her husband, and she knew what he would’ve wished done. I just wanted to reassure her that she wasn’t
getting into any trouble with the Church. 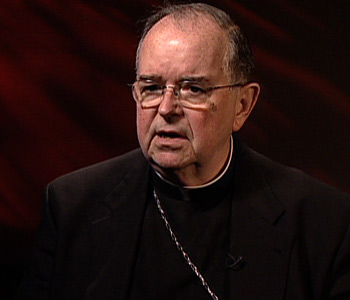 You say it was within the guidelines of the Church. What do you mean by that?

Hugh’s life also could’ve been sustained longer, in my own opinion, and many theologians wrote to me after this to say that I had given the right answer on this. But, of course, there were a lot of voices to the contrary. And that argument will continue to endure in the Church. Michelle was free to do what she thought Hugh wanted, and so she withdrew hydration and nutrition. But she also could’ve left him on it for a long time, if she thought that was the better thing to do. I was saying to her, “Whatever you choose to do, it’s your responsibility and your right to choose.”

What did you base your opinion on?

Well, of course, this is a relatively new field. We’re in the questions of death and dying, and they have all been enormously complicated by developments in medical science. We don’t yet know exactly — we don’t have a specific scientific recommendation to us. Our theology is based now mostly — and it’s relatively new — on assessing the relative balance of burden and benefit. If the treatment is benefiting the person, then it is wrong to withdraw it. But if the treatment has become a burden, and for permanent vegetative state victims treatment is generally thought to be burdensome, then it can be withdrawn.

How do you explain the differing views within the Catholic Church itself, where you have bishops in Missouri saying one thing and in Pennsylvania another and in Texas another?

I think we’re all reaching for the truth. That’s why I’m not able to say, “The Church says this is right or wrong,” here. I’m only able to say what is in the realm of possibility, the freedom of the one who is to make the choice.

Some say that, according to the pope, the bias must always be toward feeding the person; that this is elemental comfort care.

I’m familiar with that quotation, and that bias prevails. But when the treatment becomes decisively burdensome, it can be withdrawn. We have not heard the Holy Father say anything contrary to that.

What would you recommend for people facing a situation similar to Michelle Finn?

And what are the consequences when those wishes are not known or followed?

Clearly, somebody can be kept alive in a permanent vegetative state for a very long time. Systems don’t begin to break down until you’re well along in years, but it is not necessary to preserve life to that extent. We don’t have to go that far. I certainly agree, though — obviously, I agree with the Holy Father. Bias is always toward life.

But we get to a certain point, to a contrary presumption. If the treatment becomes burdensome, it’s not necessary to continue it.