BOB ABERNETHY, anchor: We repeat a story today about a remarkable man working in the slums of Bangkok, Thailand. He is a Catholic priest known as Father Joe, who, over 30 years, has set up schools that have educated thousands of poor Thai children. In the process, Father Joe Maier has skirmished with all kinds of people from drug dealers to church hierarchy. He is tough, irreverent and totally committed, as Phil Jones reports.

PHIL JONES: Children singing the national anthem of Thailand -- it's how their school day begins. After the anthem, it's time for their prayers, led by the teachers.

TEACHERS AND STUDENTS: Bow once to the Buddha. The Buddha is great. 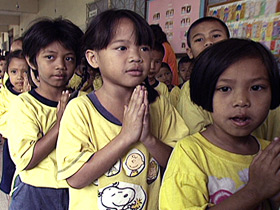 JONES: What's so unique about this scene is, the kids are praying to Buddha in a Catholic school. But that's just fine with Father Joe Maier, who says he doesn't care if the children say their "Hail Marys" to a statue of Buddha as long as they know some prayers to help them deal with life. They live in Klong Toey, amidst poverty, drugs, gang violence, and child sex abuse. Father Maier came here more than 30 years ago and never left.

JONES: Joe Maier grew up in Washington State an angry young man, his mother a Roman Catholic, his father a Protestant.

Fr. MAIER: My father was -- he wasn't a ne'er-do-well, but he was a weak man. He drank a lot of whisky, didn't take care of us. I hurt a lot. I hurt bad. I said, "I really want to help other children so they don't hurt like I did."

Fr. MAIER: To become a missionary priest and to work with the people and to convert them to Christianity and become holy, I guess. They converted me, though.

JONES (To Fr. Maier): Who converted you? 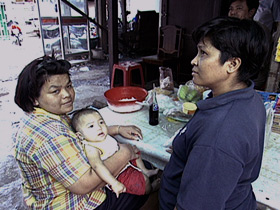 Fr. MAIER: The Buddhists and Muslims. I've only learned to be a Christian by learning from the Muslims and Buddhists: tolerance and calmness and peace.

I used to live back here.

JONES: Father Joe chose to live in a slum shack located in the slaughterhouse district near the seamy port of Bangkok.

Fr. MAIER: Don't think there's one honest, lawful occupation in this whole slum. It's a great slum. It's a community. They live together. This is where life goes on.

JONES: The young priest thought it was, in his word, "cool" to live in the midst of all the thugs and gangsters.

(To Fr. Maier): Why did you feel you had to live right here, in this slum?

Fr. MAIER: Because that's where Jesus would be. You can't live uptown.

JONES: Back in the '70s, as he walked through Klong Toey, he saw a problem he could do something about. 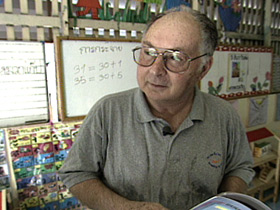 JONES: He did, and now there are 33 preschools teaching 4,000 kids. Most of the teachers got their start in these same slum schools.

Fr. MAIER: This might be the only chance for them to learn. Seventy thousand children have graduated from our schools, our kindergarten. And they're going on to school. They know how to read and write. And that's really neat. We've given them a gift they'll never, ever lose. What a glorious way to spend your life.

JONES (To Fr. Maier): Better than being a priest, a minister?

JONES: Besides the schools, there's a Mercy Center, which is a campus that provides housing for homeless kids who have been rescued from abusive parents or orphaned by the AIDS crisis. There is also a hospice for adult AIDS victims.

At another building -- a safe house for girls. They look happy, but all have sad family stories. They've been saved from the world of violence. One mother sold her daughter for about $100.

Fr. MAIER: This is the slum where the girls who work at night live. 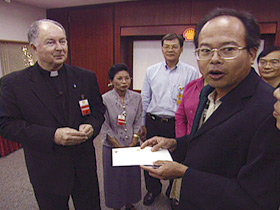 JONES: On this morning, Father Joe has put on his Roman collar and is headed out to raise money. His foundation spends nearly $2 million a year. Less than one third of this money comes from the Catholic Church and the Thai government. All the rest comes from grants, corporations, and organizations that hear about Father Joe and what he's doing in this faraway Bangkok slum. Today he's headed to a Shell Oil Company office to pick up about $1,000 donated by employees.

These plaques bear the name of major individual donor John Cook. He's a wealthy Atlanta businessman who has given more than $3 million for expansion of facilities at Mercy Center -- including a new home for Father Joe.

In recent years, the AIDS crisis has exploded in Thailand, with an estimated three quarters of a million Thais infected.

JONES: It's a brigade of children -- most of them born HIV positive. The Mercy Center is their home. On this day, they stopped by the office after school for some candy and compassion from the staff and Father Joe.

(To Fr. Maier): Are these kids going to survive? 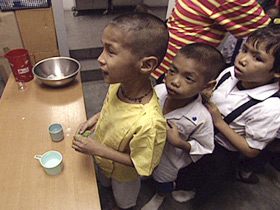 JONES: After candy, the children line up for what's called cocktail time -- their medicine. It will keep them alive for a little big longer.

Fr. MAIER: We're a house of hope and of joy and of life. You've got AIDS, you've got AIDS. You die, you die; but, you know, that's tomorrow. You live right now and here, today.

JONES: But still, the reality is painful. Jeanne Hallacy, a documentary producer, has seen how Father Joe struggles when watching a child desperately clinging to life. 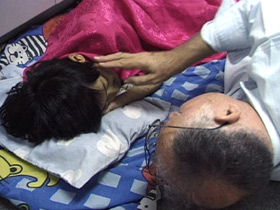 Ms. JEANNE HALLACY (Documentary Producer): Father was with her in those final days. She was in a lot of pain. He got down on the floor, and he leaned next to her and held onto her and told her, "I'm right here, I'm not going to go away. I'm going to be with you all that time until you go; I'll be with you." To me it was a great act of his faith, and it was a great lesson of someone who has faith, who acts it out.

JONES: In more than three decades of doing things his way, Father Joe has often been at odds with the Church hierarchy. For example, scenes like this -- a Catholic priest going to a Buddhist temple -- don't sit well with his superiors, some of whom he calls arrogant.

Fr. MAIER: They don't even know Buddhism exists, and Islam, and all these things. Please quote me on this. What are they going to do? Make me live in the slums of Klong Toey with people who kill pigs? Live with AIDS people?

Ms. HALLACY: The Church, the hierarchy in Thailand as well as in the Vatican, think Father Joe is a bit of a loose cannon, a wild card, a fiery, spontaneous guy that's out here, a quintessential slum priest.

JONES: But Hallacy thinks the Church realizes Father Joe is here to stay.

Ms. HALLACY: Father Joe is a local superstar. He's a hero. He's a household name -- someone that every person in this entire slum knows, and he knows many of them by name, and he knows their kids' names. 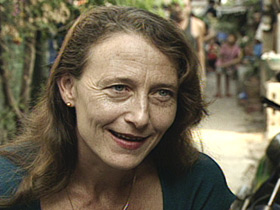 JONES: One way or another, he's brought the good faith of the Catholic Church to a Thai-Buddhist country.

JONES: Every Saturday night Father Joe has a mandatory Mass. The children give thanks, but it's done without the Catholic ritual. As Hallacy puts it, it's more like a gathering of the tribes.

Ms. HALLACY: Every week those tribes have to gather like a family council. They commune, give pause, and give thanks to the greater being. He has them learn prayers, but he doesn't enforce it upon them by way of stripping away their Buddhist identity. He's not an outsider imposing something foreign upon a Thai slum community.

Fr. MAIER: I could never, ever, make it as a priest in the United States.

Fr. MAIER: They'd throw my ass out so fast. Everything I do breaks these funny little rules, everything in the Church.

JONES: Father Joe Maier claims he was "born to be a priest." But for the poor kids of Klong Toey he is more than a priest -- he's the angel in their slum.

For RELIGION AND ETHICS NEWSWEEKLY, I'm Phil Jones in Bangkok.

Father Joe Maier is a Catholic priest who, over 30 years, has set up schools that have educated thousands of poor Thai children in the slums of Bangkok. In the process, he has skirmished with all kinds of people from drug dealers to church hierarchy.