BOB ABERNETHY (anchor): The AIDS pandemic has killed 17 million persons in Africa; it has created 12 million orphans. In some countries more than a quarter of the adult population is infected. But in Senegal, a largely Muslim country, the rate of infection is barely one percent.

Public health programs get a lot of the credit, but so do personal behavior, and religion. Fred de Sam Lazaro reports.

FRED DE SAM LAZARO: Senegal has the kind of profile typical of African countries staggering under AIDS. Most of its people are poor, [with] an annual per capita income of just $600, and two-thirds are illiterate. Yet, on a continent where AIDS has infected up to 30% of the population, Senegal’s rate is barely one percent. 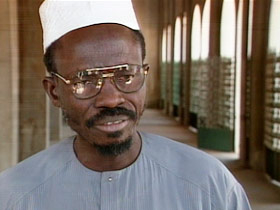 The imams in Senegal’s mosques say there’s one important statistic: the country is 95% Muslim, and they are devout. Homosexuality is outlawed by the Qur’an, they note, as is marital infidelity. AIDS in Africa is primarily a disease of heterosexuals.

Mr. ELIMANE NDIAYE (Imam, through translator): Islam is a religion that prohibits sexual deviance — it does not allow taking liberties with your sex life. As a Muslim, you are obligated to choose your wife and stay with her.

DE SAM LAZARO: There’s no question that Senegal’s mosques are filled on Fridays, and life comes to a stand still each day during the calls to prayer.

However, this former French colony also has a thriving commercial sex industry. Prostitution is tolerated — the only condition being that it keep a low profile. Senegal is alone among African nations to not only acknowledge the sex trade, but it’s also taken elaborate steps to regulate it. 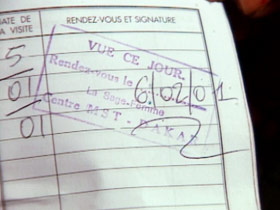 In a program that was started way back in 1969 to control sexually transmitted diseases, Senegal began requiring its commercial sex workers, or prostitutes, to register in places like the poly-clinic here in Dakar, and to come in for regular medical checkups. That program is now key to monitoring the spread of HIV in the country.

About 1,000 women are registered at this clinic in the Senegalese capital, Dakar.

Dr. ANTOINE MAHE: So every month, she has to come here for an examination, and if it’s OK, she has a stamp on her carnet. If the police goes to her, [at] her place of prostitution, she has to show her card, and the policeman checks the regularity of her visits.

DE SAM LAZARO: If she does test positive for HIV, she can continue to work, using condoms, it is hoped. Across the world, the sex trade is often the source of sexually transmitted diseases, so public health officials say the surveillance has been invaluable.

DR. SULEYMAN MBOUP (AIDS researcher): I am military by training, I am [a] colonel in the Army, and I think that even in any war, you need to know first your enemy. Knowing the current situation, you can adapt to what you are doing. 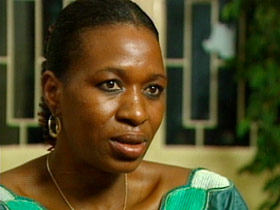 DE SAM LAZARO: Mama Bambera became a sex worker eight years ago. She says the registration program has been a huge help, both in health care services and information.

MAMA BAMBERA: This is a really good thing. I’ve learned how to protect myself. I didn’t know anything about AIDS. Now, I am able to get information and to pass it on to people with whom I work and my family members.

DE SAM LAZARO: Professor Suleyman Mboup has studied sex workers in Senegal for 15 years. He says the awareness campaigns have paid off. The infection rate among registered prostitutes is a relatively low 15% and hasn’t increased since the early ’90s. 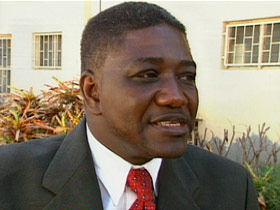 PROFESSOR MBOUP: We was able to document very high knowledge of this population and some behavior change, very high rate of usage of condom[s]. While when you go to non-registered prostitutes, you have [an] increase of this incidence rate of STI, and you have [a] lower rate of knowledge and usage of condom[s], and also HIV. And so, I think this has been very important factor.

DE SAM LAZARO: The challenge for scientists like Mboup is to reach the so-called clandestine prostitutes, whose number could well rival that of registered sex workers. Because prostitution is socially taboo, many women work outside of the system. Many are also likely [to be] immigrants from surrounding countries.

Public health experts say its difficult to accurately measure what accounts for the low HIV prevalence, whether it’s the sex worker registration, religious conservatism, or other factors. Their big worry, looking ahead, is complacency — dangerous in the face of one of history’s most tenacious epidemics.

For example, in villages like Nomre, people pride themselves on living by Islamic family values. Many here are in polygamous marriages, where, they quickly add, fidelity to one’s spouses is still a basic value. AIDS, they say, is a distant problem.

We spoke with many women in this village. None had ever met a person with AIDS or ever seen a condom. At least, not outside a condom commercial. 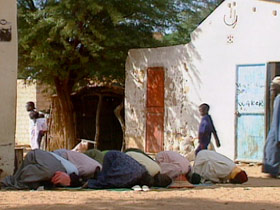 UNIDENTIFIED SENEGALESE WOMAN (through translator): Only on television. You see, we have good family values. Being faithful to our husbands is protection enough for us. We’re loyal to each other.

DE SAM LAZARO: However, many men in this village fit into a classic high risk group for HIV. They are men who travel away for extended periods in search of work — prime customers for the commercial sex industry.

That’s what happened to “Amadou,” who said a casual affair caused him to contract the virus. And although his wife has been tested HIV free, Amadou feels condemned as a social pariah. The mosque, he adds, is no refuge.

“AMADOU” (through translator): There are many imams who say that it is written in the Qur’an that people who have adulterous relationships will suffer consequences, like incurable diseases.

DE SAM LAZARO: Religious leaders say they’ll continue to admonish congregants to stick to Quranic teachings as the best prevention, but they insist they don’t condemn those with HIV. 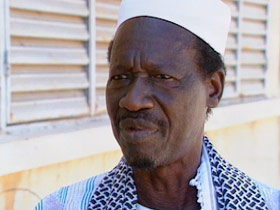 AHMED MANDAME NDIAYE (Louga imam, through translator): When I meet someone who rejects people with AIDS, I remind them that they cannot be sure that the person contracted it by cheating on his wife. There are many other ways to catch AIDS, so we have to be careful. We also have to take into account that, according to the Qur’an, God is most merciful. If a person repents, God will forgive, so who are we to not give assistance to such a person?

DE SAM LAZARO: Still, Amadou, who says he practices safe sex, is not ready too seek help from the imams.

“AMADOU” (through translator): This is very difficult. This a taboo here. If I went to see the imam or a fellow Muslim, they would say, “Okay, this guy was coming here in the mosque, praying with us, but he was a hypocrite. He engaged in bad behavior, shame on him!”

DE SAM LAZARO: Successfully discouraging that so-called “bad behavior” will be key to keeping Senegal out of the path of the AIDS epidemic.

It remains to been seen in a few years whether Senegal’s religious leaders will still mainly be preaching a message of marital fidelity in their efforts to combat AIDS, or whether they’ll be forced to shift emphasis and talk about caring for people who have the virus.