BOB ABERNETHY, anchor: We have an unusual church-state story today -- actually, church, state, and guns. In Utah, people who get licenses to carry concealed weapons can carry them even in church. If a church does not want its worshippers armed, it can either post a "No Guns" notice at the door or register with a state agency as a no-guns site. That has provoked a battle between the gun lobby and the Mormon church, on one side, and several other churches, on the other. Lucky Severson reports.

LUCKY SEVERSON: In Utah, the line between politics and the predominant religion has always been paper-thin, and the power of the gun lobby never in doubt. When lawmakers craft gun legislation, it's always with a lot of help from the Mormon church and the National Rifle Association. It's always been that way. Only now, many of the state's other faiths -- Catholics, Jews, Muslims, and Protestants -- are taking a stand, drawing a line. 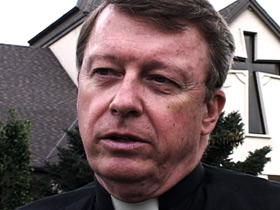 Reverend DAN WEBSTER (Episcopal Diocese of Utah): We're going to hold out for what we believe is a centuries-old tradition that we have the right to say what's allowed in our churches and what's not.

SEVERSON: Episcopal priest Dan Webster and dozens of other non-Mormon church officials are upset with a new gun law that, in their opinion, goes too far. Dee Rowland is with the Catholic Diocese of Salt Lake.

DEE ROWLAND (Catholic Diocese of Salt Lake): I'm a mild, soft-spoken person, but the words that come to mind over that law are "absurd," "ridiculous," "ludicrous."

SEVERSON: The law that seems so ridiculous to many churchgoers allows thousands of Utahans to carry concealed guns to church. There are two exceptions to this decree. If they want to prohibit guns, individual churches must either post "No Guns" signs on the front door or register with the state's Bureau of Criminal Investigation. The new law, like almost all gun legislation in Utah, was sponsored by State Senate Majority Leader Mike Waddoups.

Senator MICHAEL WADDOUPS (State Senate Majority Leader): I believe in the right to worship how, when, and who you'd like, at the same time a concealed weapon is concealed. I don't know how that interferes with anyone as long as it's concealed.

SEVERSON: That's an argument that doesn't sit well with Marla Kennedy. She's director of the Gun Violence Prevention Center. She's also a Mormon, owns a gun, and shot her first deer when she was 14.

MARLA KENNEDY (Executive Director, Gun Violence Prevention Center): We're not a group of gun haters. Guns are not a bad thing, an evil thing. It's the policy that surrounds them that is.

SEVERSON: It's the policy, or the law, that requires churches to post bans or register with the state that offends Bishop Carolyn Tanner Irish of the Episcopal Diocese of Utah. 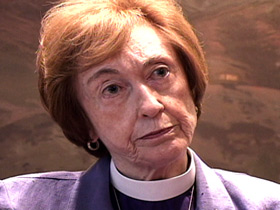 Bishop CAROLYN TANNER IRISH (Episcopal Diocese of Utah): We own the churches. We practice religious freedom, and that's an infringement upon our rights -- that we register in order to ban.

SEVERSON: Is it a violation of church and state?

SEVERSON: Utah is one of the 37 states that allow concealed weapons. And in the last few years the state has experienced a fourfold increase in the number of concealed weapon permits. There are now about 60,000.

Ms. KENNEDY: If you've got $49 and can pass a background check, you can walk out with a concealed weapon permit.

Sen. WADDOUPS: These are the best citizens we've got out there that are getting these permits, for the most part. There are a few occasional [bad ones] that will slip through.

SEVERSON: But it's the notion that guns should ever be allowed in churches at all that troubles most religious leaders.

Bishop IRISH: For as long as there have been religious sanctuaries, holy spaces set apart, people come there believing that they are safe and that they can trust that space and those people to protect them, and there has always been a place you leave your sword, you leave your -- whatever weapons you may be carrying.

SEVERSON: What also troubles the interfaith alliance about the gun law is the way it was written, with the strong input of the NRA and the Mormon church -- the Church of Jesus Christ of Latter-Day Saints.

Rev. WEBSTER: Any controversial issue does not get acted on, either voted up or down, voted on Capitol Hill in Salt Lake City, Utah, without the approval or disapproval of the Church of Jesus Christ of Latter-Day Saints. It's a hard road for the rest of us to try to get voices of difference even heard.

SEVERSON: Mormon church officials declined to be interviewed for this story but have not denied helping to write the gun law or approving the state notification clause. It was viewed as a compromise between the vocal and powerful gun lobby and those who would have preferred a total ban.

Ms. KENNEDY: Usually when the church says something, that's it. It's another line in the Bible -- except when it comes to gun laws.

SEVERSON: Mormons comprise over 65 percent of Utah's population, and the church opposes guns in houses of worship but agreed, along with a handful of non-Mormon congregations, to register with the Bureau of Criminal Investigation. 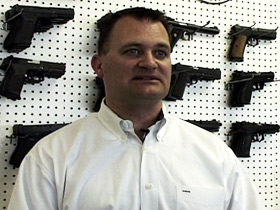 Clark Aposhian is the chief lobbyist for the state's concealed weapon carriers. He helped write the legislation and says Mormon officials preferred registering with the state rather than plastering all their churches with "No Gun" notices.

CLARK APOSHIAN (Lobbyist): Church leaders did not want the last thing you see before entering a church to be a gun with a line through it -- a "No Gun" sign.

SEVERSON: This is only the latest battle over gun rights in Utah. Legislators tried to force state courts to install gun lockers, until judges went ballistic. Legislators also tried to force the University of Utah to allow guns on campus. The university is fighting it in a bitter court battle.

Ms. KENNEDY: And the polling, year after year, from 60 to 85 percent of all Utahans, LDS, Catholics, Republicans, Democrats, independents, have all said guns don't belong in schools and churches. It's when you get up to the hill and the 104 people elected who refuse to do the will of the people.

Mr. APOSHIAN: The best poll, I think, with regards to this, is Election Day in November, and all the legislators are voting pro-gun or pro-self defense. Why are they continually reelected and in contrast to the antigun or anti-self defense legislators? They are continually defeated.

SEVERSON: So why is the gun battle taking place here in church of all places? Why guns in places of worship? Senator Waddoups says in these times, some people feel as vulnerable in church as anywhere else.

Sen. WADDOUPS: Some of them have actually made a bold enough statement to say, "I can't go anymore because I'm fearful for my safety." Today many people think a church is no different than a 7-11, and they'll commit a crime anywhere.

SEVERSON: But has there been violence in churches here?

Sen. WADDOUPS: Not against an individual I'm aware of, but we've certainly had vandalism, fires. But I am not aware of any weapons being fired in church. 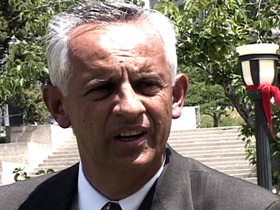 SEVERSON: Not long ago, there was an attempt to get a referendum banning guns in all churches, period. But it failed.

Ms. ROWLAND: It frightened me all the more because it seemed like the very people that needed their weapon with them in church were the very type of person I would worry about, because they seemed emotionally fragile.

SEVERSON: Dell Schanze is anything but fragile.

DELL SCHANZE (Owner, Totally Awesome Guns): I carry a sidearm when I drive, but I also keep an assault rifle in my truck.

SEVERSON: Dell Schanze is one of the most visible gun enthusiasts in Utah, appearing on TV regularly promoting his "Totally Awesome" computer and gun stores. He says he has used his concealed weapon a dozen times to stop crimes, and that guns should not be banned anywhere.

Mr. SCHANZE: If you're going to have a terrorist attack, they're going to attack the least defended thing, you know, they can go up against. So trying to openly say, "Gee, there are no guns in this church, please come and kill us," I mean it's just the stupidest thing on the planet.

Bishop IRISH: Violence is a treacherous kind of thing, in a general way, but in our culture it is promoted, it is nurtured. And as a bishop, I want to see that we don't contribute to that.

Mr. SCHANZE: Well, that's a lovely fantasy. It would be nice if we could live in a world where there were no guns, no crime, you know, no violence, nothing. But we don't live in that world; it doesn't work that way, and just because you step through the doors of a church doesn't mean the world vanishes into some la-la-land in the sky somewhere. 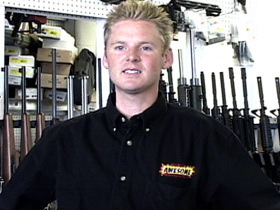 (Shooting Gun): Do you want a couple more bursts?

Rev. WEBSTER: Carrying a gun into a church betrays the very reason why a church or a mosque or a synagogue exists. It's a weapon of violence; it kills people.

SEVERSON: So for now, a standoff. Only churches with signs banning guns or that register with the Bureau of Criminal Investigation can legally exclude concealed weapons. People packing heat can find another church.

Sen. WADDOUPS: I'd rather not have guns in the church. I prefer safety first.

Ms. KENNEDY: Eventually, someday, the legislature is going to have to be held accountable, and I'm afraid of what that's going to take.

SEVERSON: Senator Waddoups says there are no plans in the legislature to change the law. Those who want it changed, the interfaith alliance, say they simply won't comply. And the people in the state of Utah are in a state of confusion. For RELIGION & ETHICS NEWSWEEKLY, I'm Lucky Severson in Salt Lake City.

In Utah, people who get licenses to carry concealed weapons can carry them even in church. If a church does not want its worshippers armed, it can either post a “No Guns” notice at the door or register with a state agency as a no-guns site. That has provoked a battle between the gun lobby and the Mormon church, on one side, and several other churches, on the other.