LUCKY SEVERSON, correspondent: These are Navajo horsemen in a place called Bears Ears, celebrating a most unusual event—25 tribes coming together for a single grand cause. They want Congress or the president to create a national monument called Bears Ears to protect almost two million acres of land sacred to Native Americans. This is Willie Greyeyes, from Navajo Mountain:

WILLIE GREYEYES: Back in time immemorial, Navajos and other Native Americans were tied to this land, directly, deeply. There were probably three to six million people living up here before. 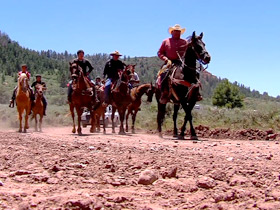 SEVERSON: The area got its name because early Native Americans thought that, from a distance, the two buttes rising above Cedar Mesa looked like bears ears.

Dan Simplicio is an archaeologist and a member of the Zuni Pueblo tribe, which he says occupied these lands in southeastern Utah as far back as 12,000 years.

DAN SIMPLICIO: The spiritual aspect here is the people themselves who once inhabited these areas, and their presence is still here. They may be dead and gone, but we consider that part of their presence that is an important link to the living native people.

SEVERSON: But local residents, for the most part, are decidedly not happy with the Bears Ears proposal. They believe it would limit industry and access to the land. This is San Juan County Commissioner Phil Lyman.

COMMISSIONER PHIL LYMAN: As a commissioner, our job really is to pay the bills, keep the schools open, keep the kids educated, pay for those basic services, and other people come with these proposals of land use, and I say, have you given consideration to what that would do to the tax base?

SEVERSON: People here are fed up with federal restrictions on much of the land that surrounds them, and 60 percent of that land is owned by the federal government. 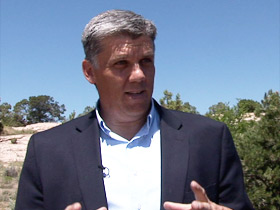 LYMAN: Blanding is kind of an island surrounded in an ocean for federal land, and so we’re very dependent on it, which leads to, I guess, probably some conflicts and things.

SEVERSON: Conflicts are not uncommon around here, especially for Commissioner Lyman. He was recently convicted and is facing a year in jail for leading dozens of ATVers [all-terrain vehicle] on a protest ride onto federally administered Bureau of Land Management or BLM land, which was off-limits to four-wheelers. Lyman feels he’s done nothing wrong, and the governor has offered to pay $10,000 out of his campaign fund to help pay Lyman’s legal bills.

SEVERSON: Lyman is not alone in the view that locals are being squeezed. San Juan County Commissioner Bruce Adams, a fourth-generation rancher also opposes the Bears Ears proposal as it is, because National Monument status can limit public access to certain roads. Hiking, biking, and hunting are permitted, but only in certain areas, and there can be no new industry.

COMMISSIONER BRUCE ADAMS: We believe that the roads in San Juan County need to stay open, that people need to have access to this beautiful, wonderful land, but we just feel like maybe that proposal is just too big.

SEVERSON: If you don’t get this designation, what do you see in the future? 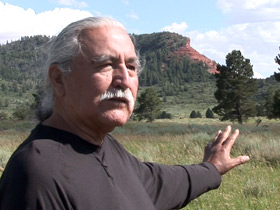 WILLIE GREYEYES: Probably a lot of ATV trails. As you can see, it’s a pristine area. Really nature’s own work. If you alter that, put a motel or something in here, that will change the whole story.

SEVERSON: It’s not easy for outsiders to understand the sacredness of this land to Native Americans. Mother Nature is not simply an expression. Listen to Jonah Yellowman, a spiritual leader of the Navajos.

JONAH YELLOWMAN: Our elders, they used to tell us, you know, your Creator will talk to you in some way every day of your life. Ours is like, you know, talk to nature and air, water, the sound, breeze, and the sound of the horse, or something like that. It gives us—it kind of tells you things.

SEVERSON: Another reason Native Americans consider the land holy is that among the cottonwoods and sagebrush are plants used for healing and ancient ceremonies, plants like Indian tobacco and datura.

SIMPLICIO: A lot of their spiritual ceremonies are actually done through the ability to contact the prehistoric practitioners to come and assist in healing of people, and it’s not the fact that they’re medicine men per-say, but they are the conduit to that type of teachings from the past. People who inhabited these areas are also still here. 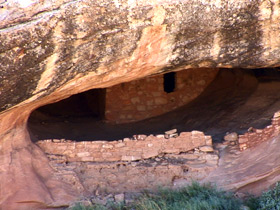 SEVERSON: Their ancestors may be here, but many of their graves are gone, dug up and desecrated. These ruins are called Long Fingers. The site has been looted and many of the structures destroyed. Cameron Cox is an archaeologist with the BLM:

CAMERON COX (Bureau of Land Management, Utah State Office): Unfortunately, these graves may have been targeted because of the artifacts they contained.

SEVERSON: Artifacts like these, which now rest at the Edge of the Cedars State Park Museum in Blanding. These kinds of objects bring big money at auction houses and are prized by private collectors.

We know there has been significant looting. In 2009, federal agents arrested 24 people, mostly from the small town of Blanding, Utah and charged them with stealing ancient Native American artifacts from public lands, including sacred relics, even human bones from burial sites. The government said it was the biggest bust ever. Two of those arrested, including the town’s only doctor, committed suicide. The rest pled guilty in exchange for probation. The people of Blanding will not forget.

ADAMS: You have people coming in at daybreak in full body armor with automatic weapon, in black Suburbans, jumping out of the vehicle, taking people out of their homes in their night clothes, throwing them face down on the lawn, handcuffing them, putting leg irons on them, their children watching while this is going on. It’s traumatic. 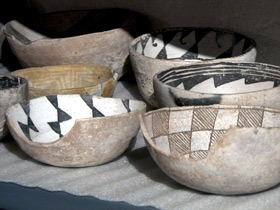 SEVERSON: The commissioner seemed more upset about the swat-team-like tactics than the guilty pleas.

ADAMS: No question, there were some that were fined because of the artifacts that they had collected by whatever means. I really don’t how they came up those artifacts, but yeah, some people received fines.

WILLIE GREYEYES: I wish somebody would rent a tractor, a backhoe and take it down to the graveyard in the city, and start digging up those coffins to make a statement as to how we feel about our ancestral graveyards. Maybe that’s what type of action that it would take to educate.

ADAMS: I’m not going to try and defend anybody who takes a backhoe and tries to dig up a Native American ancestral grave. I think that’s terrible. It’s wrong. They ought to be prosecuted and brought to the full justice of the law.

SEVERSON: Willie Greyeyes and other tribal leaders are counting on the president to set aside Bears Ears as a national monument, much as President Clinton did in the Escalante region of southern Utah in 1996. That caused a local uproar that hasn’t subsided.

ADAMS: That’s the threat, and that’s what’s motivated the citizens of this county to come up with a proposal is to help alleviate the threat that Obama with the pen create whatever he wants to create.

JONAH YELLOWMAN: We want to leave it the same. Keep it. Protect it. We going to use it the right way. That’s what we want.

SEVERSON: For now, the county, the state, and the congressional delegation are pushing hard to come up with the proposal that will keep the federal government at bay and limit the size of Bears Ears.

Twenty-five Indian tribes want the federal government to create a national monument called Bears Ears to protect nearly two million acres of land sacred to Native Americans in southeastern Utah. But, as Lucky Severson reports, local residents want at least some of the land kept available for development and recreational use.