BOB ABERNETHY, anchor: The candidates continued to campaign in debates and on the campaign trail. With religion a significant factor in how people vote, we begin this week a three-part series on religious voting blocs. Today, one of the most important of those blocs: Catholic voters. Once loyal to the Democratic Party, Catholics are now as divided as the rest of the nation. And since Roman Catholics make up about a quarter of the population, that’s a lot of votes up for grabs — particularly in the large battleground states. Kim Lawton reports. 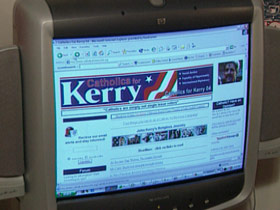 KIM LAWTON: From the basement of his home in the Columbus, Ohio, suburbs, Eric McFadden is waging a faith-based, grassroots campaign in support of John Kerry. McFadden launched the CatholicsforKerry04.org Web site in July after meeting the senator and, he says, connecting with Kerry as a Catholic.

ERIC MCFADDEN (Member, Knights of Columbus and John Kerry Supporter): I’m trying to give a voice to Catholics so that they can stand up and say, “I am a Catholic Democrat, and I’m proud, and these are the principles that I believe in.”

LAWTON: McFadden admits it can be a tough sell, even in his own parish — St. Brigid of Kildare Catholic Church in Dublin, Ohio. Many of McFadden’s fellow parishioners there believe George W. Bush, a United Methodist, better reflects Catholic principles. Wayne Booker is one of them.

WAYNE BOOKER (Member, Knights of Columbus and George Bush Supporter): President Bush is very firm on the life issues and the issues of concern to Catholics. He gives support for the unborn. He believes in traditional family values — a man and a woman being married.

LAWTON: Catholics used to be a foundational part of the old Democratic Party coalition, but not anymore. In the 2000 election, Al Gore got just 50 percent of the overall Catholic vote, while George Bush got 46 percent. This time around, polls suggest Catholics are still almost evenly divided, with a significant percentage swinging back and forth between the two candidates. 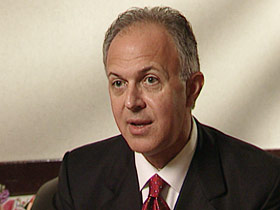 Professor MARK ROZELL (George Mason University): We really have to look at distinctions within the Catholic community to find where the different blocs of voters are rather than talk in general about a “Catholic vote.”

LAWTON: The biggest shift to the Republicans has occurred among white Catholics, particularly those several generations removed from their labor union, immigrant roots. For many of these voters, conservative social issues such as abortion are key. 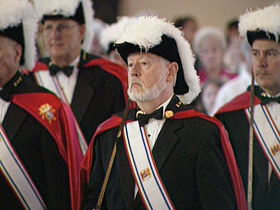 Wayne Booker is a cradle Catholic and a member of the Knights of Columbus. He runs a small printing company in Dublin, Ohio. Growing up, he says his working-class family supported all the things the Democratic Party stood for — until the abortion issue came to the fore.

Mr. BOOKER: I mean, I was a Kennedy Democrat, and I think I probably voted for Democrats up through Jimmy Carter. But with the life issues that are very important to me, I’ve become — my religion and my politics have kind of gotten together.

LAWTON: But the majority of Catholics are pro-choice. And even some of those who oppose abortion don’t base their vote solely on the issue. Like Wayne Booker, Eric McFadden is a lifelong Catholic, a member of the Knights of Columbus, and an opponent of abortion.

Mr. MCFADDEN: That’s a tough issue for Catholics, but again, I don’t think we have to be single-issue voters. Abortion is a life issue, but there are also many other life issues. Again, health care, jobs, the war, hunger, poverty.

LAWTON: This year, for many Catholics, concern over the war with Iraq is a key part of the mix, especially in light of the Vatican’s strong opposition to the war. The U.S. Catholic Bishops encourage Catholics to vote and have put out a nonpartisan list of issues the Church cares about. There is strong disagreement among lay Catholics — and among the bishops themselves — about how much priority each issue gets. 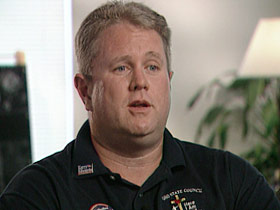 Mr. BOOKER: You can’t look at those issues as, “We’ve got 10 issues, let’s pick.” If Senator Kerry fills out five and President Bush fills out five, then they’re split evenly. Really, there are some issues on that list that are preeminent. The most important one, of course, is the right of an unborn child to be born.

LAWTON: A few conservative bishops, including St. Louis Archbishop Raymond Burke, have publicly stated that abortion should almost always take precedence. Burke said he would deny Communion to Kerry and other pro-choice politicians. But analysts don’t believe that is swaying undecided voters.

Prof. ROZELL: Even though, in this election cycle, some bishops have spoken out openly and questioned Kerry’s claim to be Catholic because of his policy views, I don’t see that that is moving any Catholic voters at all.

LAWTON: Still, the Kerry-Edwards campaign has appeared deeply challenged by issues of faith. Kerry says he doesn’t like to wear his religion on his sleeve. On the campaign trail, he hasn’t emphasized his Catholic identity, and he has not spoken before Catholic groups.

Supporters see a much different situation from 1960, when John F. Kennedy had to answer concerns about whether his faith would interfere with his presidency. 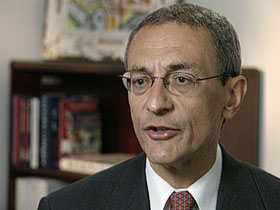 LAWTON: Former Clinton Chief of Staff John Podesta, himself a Roman Catholic, has been urging Kerry to be more open about how faith impacts his politics.

Mr. PODESTA: The American public wants to know what’s in your core, what makes you tick, what’s your moral dimension that you’re going to bring to bear on important public issues. They want to know when you close the door in the Oval Office, you know, what values do you bring to the table?

Mr. MCFADDEN: I really, strongly, believe that he will make a fine president. But if they’re not going to listen to us, then they’re going to isolate a lot of Catholic voters, and that’s a shame. 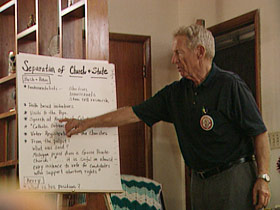 LAWTON: McFadden is trying to take matters into his own hands. In addition to his Web site, he’s organizing Catholic meetings in support of Kerry. Meanwhile, President Bush has mounted an aggressive effort to win over Catholic voters. In July, he appeared before the Knights of Columbus, where he was welcomed by shouts of “four more years.”

Rev. FRANK PAVONE (National Director, Priests for Life): Ah, isn’t it great to be with Catholics who aren’t afraid to be political!

ED GILLESPIE (Chairman, Republican National Committee): A basic look at the two candidates shows that President Bush is the candidate that shares the values that Catholics hold dear.

LAWTON: The RNC has recruited more than 50,000 Catholic team leaders to mobilize at the local level.

RALPH REED (Bush-Cheney Campaign): We’ve built an organization that goes down to the precinct level in every battleground state. And if you look at the states that will decide the outcome of this election — particularly the Great Lakes states of Wisconsin and Minnesota and Michigan and Ohio — those states, they’re high-percentage Catholic states.

LAWTON: And given the political divisions among the ranks, the battles are likely to be very hard fought. I’m Kim Lawton reporting.