BOB ABERNETHY, anchor: A grand finale this weekend for evangelist Billy Graham, who is leading what he says will be his last U.S. crusade at Flushing Meadows-Corona Park in New York City. The three-day meeting is his 417th. In a ministry spanning nearly 60 years, Graham has preached in person to more than 210 million people around the world. He says his age and poor health are now forcing him to bring the crusades to an end. Kim Lawton reports.

KIM LAWTON: In 1957, New York City played a key role in making the young and vigorous evangelist Billy Graham an international phenomenon. He preached at Madison Square Garden six nights a week for 16 weeks from May to September. More than two million people attended.

Today, the 86-year-old evangelist says he chose New York to finish off his nearly six decades of crusades. 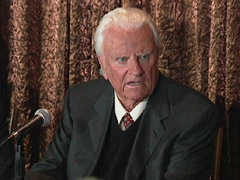 Reverend BILLY GRAHAM: This will be the last in America, I’m sure. But we do have an invitation to go to London, and we’re praying about that and thinking about that.

LAWTON: Graham’s physical ailments make it difficult for him to preach. He suffers from Parkinson’s disease, fluid on the brain, a recently-broken pelvis and other problems.

WENDY MURRAY ZOBA (Writer-in-Residence, Gordon College): He’s aging as we all know, and there is some bittersweet aspect to watching this one-time towering giant more enfeebled. His message is still as robust as always, but it’s very obvious that his physical disposition and state is much diminished.

Rev. GRAHAM (preaching): But God is love. And God is grace and mercy.

LAWTON: Author Wendy Murray Zoba has written widely about the evangelical community. She says while Graham’s basic message hasn’t changed over the years, he has toned down much of his rhetoric. 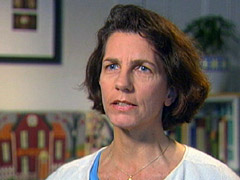 Ms. ZOBA: He did start out with a very flamboyant, zealous, kind of in-your-face approach. But he quickly understood his role in a more circumspect way. He mellowed his approach to his public persona, and he truly became a unifier.

LAWTON: Graham admits there were times in his past when he got too politically involved, particularly during the Nixon era. He says he now avoids politics altogether.

Rev. GRAHAM: If I get up and talk about some political issue, it divides the audience. And what I want is a united audience to hear only the Gospel. There are many times that I went too far in talking about such issues, and I think this time I want to stick only to the Gospel.

LAWTON: This week, Graham told a packed news conference he’s very aware that he’s coming to the end of his ministry and his life.

Rev. GRAHAM: I’ve been asked so many times lately, do I fear death No, I look forward to death with great anticipation. I’m looking forward to seeing God face to face. And that could happen any day.

LAWTON: He says he has confidence in God for the future.

Rev. GRAHAM: The Bible says that Jesus is coming back to this earth. And someday he’s going to reign. And there’ll be no tears, no suffering, no death — a wonderful future. And I hope I’ll meet all of you there. And bring your camera, because I may have one too!