BOB ABERNETHY, anchor: Now, the first of a special, two-part series on a growing movement that is rethinking what Christianity and the church should look like in a contemporary culture. Some call it “the emerging church.” Some say it’s “emergent.” Whatever it’s called, it is developing among both evangelical and mainline Protestants, especially young ones. For some, it’s confusing. It’s also controversial, as Kim Lawton reports.

KIM LAWTON: In a dark sanctuary filled with votive candles, fast-paced images flash across video screens. Participants come forward to write their names on a wooden cross on the floor. At the altar, a DJ with a computer mixes the music to set the mood. 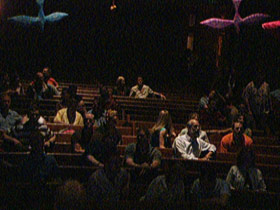 Welcome to worship for the coming generation.

More and more Christians say the usual ways of “doing church” no longer resonate in a contemporary, postmodern culture. Seeking to fill the gap, a growing movement called “the emerging church” is developing new forms of worship and theological questioning for a new cultural context.

LAWTON: But critics fear some parts of the movement may be heading in a dangerous direction. 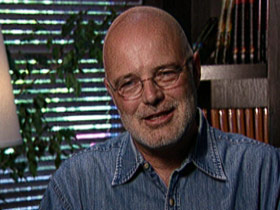 LAWTON: The emerging church movement began several years ago as a conversation among evangelical Gen-X leaders who were alarmed at church dropout rates among 20s and 30s. About the same time, a pastor from Maryland, Brian McLaren, began writing about what he saw as a growing disillusionment with the way evangelical Christianity was being practiced.

BRIAN MCLAREN (Pastor, Cedar Ridge Community Church): So it was [a] very exciting coming together of some of these younger leaders, and some of us a little bit older, saying, “This is our world, and this is the future. And the Christian faith and our individual churches, we’ve got to engage with and deal with it.”

LAWTON: They formed a loose network named Emergent to discuss what it means in today’s world to follow Jesus and to reach out to others. Their discussions exploded over the Internet, especially through several lengthy and ongoing blogs. The network now sponsors national conventions and offers resources, but emergent leaders still resist becoming institutionalized. Many vigorously deny that it should even be called a movement.

Call it what you want, the emerging church is having a big impact across denominational lines. But there are no easy labels. Participants have called themselves postmodern, postconservative, postliberal, postevangelical, and post-Protestant. 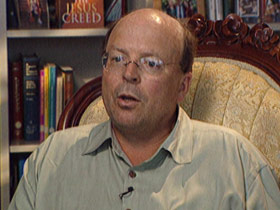 Professor Scot McKnight of North Park University in Chicago is closely monitoring the Emergent conversation and its participants.

SCOT MCKNIGHT (Professor, North Park University): It can’t be simply defined; it can’t be simply categorized. And it’s causing no end of frustration for people who’d like to have tidier boxes. This is the way they want it because they believe the gospel should have a local expression.

LAWTON: Solomon’s Porch is an emerging church that began six years ago in Minneapolis. Its pastor, Doug Pagitt, was one of the early Emergent leaders. The church meets in the round and has couches and recliners instead of pews.

Pastor PAGITT: When you sit on a couch as opposed to a bench or a pew or something else, you just sort of have a sense that you’re supposed to talk to that person. Because who do you sit on a couch with, other than a friend? And so, it implies a relationship.

LAWTON (To Pastor Pagitt): Why do you worship this way, in the round, as opposed to, you know, a more traditional model, which is everybody looking forward? 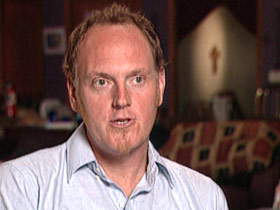 Pastor PAGITT: We’re trying to say something about where power lies in our community. And so to meet in the round says all of these people matter.

UNIDENTIFIED WOMAN (To Congregants): We gather not simply to be a blessing.

LAWTON: Every member here has a say in what happens. They don’t call it a Sunday worship service; it’s a worship gathering, and it happens on Sunday evenings. Pagitt doesn’t preach sermons, he leads discussions. No question is off limits.

UNIDENTIFIED WOMAN: There’s a sort of comfort in knowing that one, I don’t have to have the answers, and that there aren’t necessarily answers.

LAWTON: Individual emerging churches may look different, but they share many characteristics. Most are casual, with a big emphasis on the experiential. 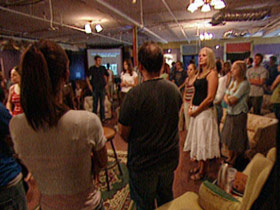 Pastor MCLAREN: It’s not just a matter of coming and sitting in a pew and enduring 50 or 70 or whatever minutes of observing something happen. But it’s saying, “I want to experience God. I’m interested in coming into an experience here.”

LAWTON: Worship is participatory and multisensory. People are encouraged to tangibly express their spirituality. Many are weaving together elements from different religious traditions, especially Catholicism and Eastern Orthodoxy. Some are discovering medieval mystical practices such as walking the labyrinth, but adding decidedly modern twists. It’s a pick-your-own-mix approach that also stresses community and social justice.

Pastor MCLAREN: More and more of us are feeling that if we have a version of the Christian faith that does not make us the kind of people that make this a better world, we really want no part of it.

LAWTON: There are similar practices in mainline Protestant churches, such as Cornerstone United Methodist Church in Naples, Florida. There, a blue jeans-wearing, electric guitar-playing minister leads a lively service that combines United Methodist tradition with high church liturgy and a Pentecostal flavor. 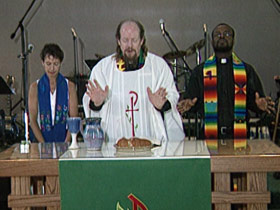 ROY TERRY (Pastor, Cornerstone United Methodist Church): I joke around in saying I’m more of a Metho-Catho-Costalite than I am a United Methodist, and I think that’s because each of those traditions has added so much to my faith experience and my growth.

DIANA BUTLER BASS (Religion Historian, Virginia Theological Seminary): These mainline churches are as dissatisfied with their bureaucratic structures and their denominational structures as these emerging evangelicals are with the traditional patterns of setting up evangelical congregations. So they’re — on both sides of this conversation, they’re reaching toward new kinds of structures.

LAWTON: And it’s more than just worship styles. Some, but not all, in the emerging church movement are urging profound theological reassessments. They advocate wrestling with traditional understandings of the faith, rather than accepting pat answers.

Pastor PAGITT: It’s more important for us to feel like we’re representing a beautiful expression of our life with God than it is to be right about everything.

Professor MCKNIGHT: Many of these emergent voices are less certain of their theological ideas, and this appeals to a generation that is given to dialogue and to discussion and to conversation, and not making firm judgments about people.

LAWTON: In some cases, McKnight says, they are challenging deeply held views. 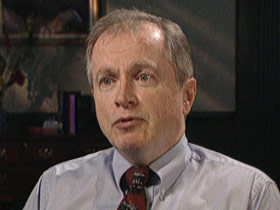 Pastor MCLAREN: When we make it sound like we have all the bolts screwed down tight and all the nails hammered in, and everything’s all boxed up and we’ve got it all figured out, at that moment, I think we have stopped being faithful.

Prof. CARSON: There is truth to be announced. If you start losing that, you really step outside what Christianity is. The gospel is something to be taught and to be believed. It is not something simply to be experienced.

LAWTON: Professor Don Carson of Trinity Evangelical Divinity School in Illinois is among the evangelical leaders troubled by some emergent ideas. His new book critiques the movement.

Prof. CARSON: Some in the emerging movement, so influenced by postmodern sensibilities, find any mention of truth, objective truth, angular or offensive. It might sound intolerant.

LAWTON: Emergent leaders say because the spectrum of their beliefs is so diverse, it’s impossible to make sweeping judgments. Tony Jones, Emergent’s new national coordinator, is not concerned by charges of theological sloppiness. 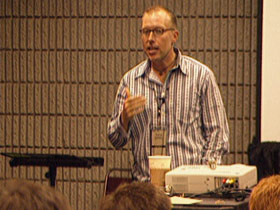 TONY JONES (National Coordinator, Emergent): Is it more sloppy than what a systematic theology professor does, sitting in his tenured chair typing up a book on the doctrine of the atonement? Yeah, it’s messier than that! But that’s, I think, theology as it works itself out in the lives of human beings who are kind of scratching and clawing their way to try to follow Jesus on a daily basis. It’s a messy endeavor, and I embrace that messiness.

Prof. MCKNIGHT: I understand that many of them want to ask good questions, but for things to be Christian means that there are answers and there are limits to what those answers can be.

LAWTON: There are also questions about the extent to which the emerging church conversation will push out beyond a white middle-class movement to become truly diverse and global, and whether it will have a lasting spiritual impact.

Mr. JONES: The emerging church is a place of conversation and dialogue and movement. Where that’s going to go, we don’t know. We’re figuring this out together. We don’t have an agenda of what it looks like at the end of the road. We just want to gather up people who are on this road, who want to go together on it.

LAWTON: And they believe that journey is just as important as a final destination. I’m Kim Lawton reporting.

ABERNETHY: Next week, in part two, Kim has an extended conversation with Brian McLaren, whose provocative writings have played a key role in the emerging church movement.