You might have thought TM had disappeared, but last winter in Iowa, Lucky Severson found a town where it is flourishing and, for some, controversial: is it just a meditation practice or is it also a religion? 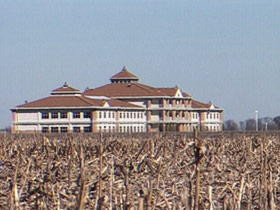 LUCKY SEVERSON: Who would imagine that the nerve center of Transcendental Meditation in the U.S. would be located in the middle of cornfields?

It was 1974 when Maharishi Mahesh Yogi founded what is now the Maharishi University of Management in a bankrupt Presbyterian campus in Fairfield, Iowa. That was after he had gained fame as a guru to the Beatles.

Now, twice each day, the university’s twin 25,000-square-foot domes are filled with the silence of hundreds of Transcendental Meditators, or “TM’ers,” attempting to achieve a state of inner calm that transcends the hustle and bustle of everyday life.

This is not the average farm town. Even the mayor, Ed Malloy, is a TM’er.

Mayor ED MALLOY (Fairfield, Iowa): I’ve discovered that this world is the real world and it’s a beautiful, beautiful place to live. 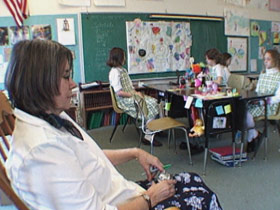 SEVERSON: These are sixth graders who learned how to meditate when they were in the third grade.

Unidentified Girl #1: ’Cause it releases all your stress and makes you feel very calm and focused.

Unidentified Girl #3: And I’ve been doing it for many years and it’s just — over the years — it just makes you feel so much better.

SEVERSON: Mario Orsatti is a TM’er from Philadelphia, with a master’s degree in education.

MARIO ORSATTI (Spokesman, The Institute of Science, Technology and Public Policy, Maharishi University): I think too many adults don’t realize how stressful our children — the amount of stress that our children are experiencing as a result of their education.

SEVERSON: Maharishi University is nationally accredited and it offers advanced degrees in management, education, [and] Indian philosophy, as well as other fields, to about a thousand students from all over the world. 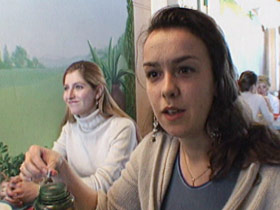 Alisa Devlin is from London.

ALISA DEVLIN (Student, Maharishi University): And it just flipped my life to the other side in all positive ways — all the negativity, all the, like, hurt and all kinds of things that was going on, it just fell away.

Dr. FREDERICK TRAVIS (Director, Center for Brain, Consciousness, and Cognition, Maharishi University): David has been meditating since he was four.

SEVERSON: There’s even a brain research lab on campus where technicians trace the effects of meditation on student volunteers.

Dr. TRAVIS: During Transcendental Meditation practice, you see a greater lever of integration in brain functioning.

SEVERSON: The results are all positive and self-evident, according to TM’er John Hagelin, a renowned physicist. 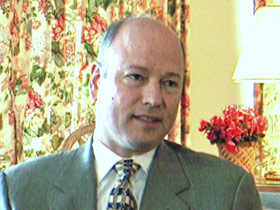 SEVERSON: Fairfield has grown dozens of new businesses and hundreds of jobs, many of them high-tech; why it’s been called the “entrepreneurial Mecca of the Midwest” and “Silicorn Valley.”

Where else in small town America would you find five Indian restaurants, three Thai, and more hybrids than Hummers?

Mayor MALLOY: I describe it as really a model community for the 21st century. I think that there is going to be a natural trend for people to move out and move away from those cities and look for small communities that offer quality of life. 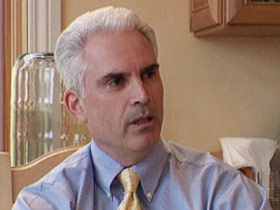 SEVERSON: The mayor is serving his second term. He was elected by both meditators and nonmeditators — which is the way people divide themselves here. Fairfield has a population of about 10,000, with approximately one third claiming to be meditators.

For 30 years, meditators and nonmeditators here have been getting along in splendid isolation — some grumbling, but nothing serious. There is growing unease, though, in some circles, but it’s not about people or lifestyles. It’s about whether it’s possible to be both a meditator and a believer.

SEVERSON: Greg Crawford is pastor of the Jubilee Christian Fellowship, which has schools, churches, and missionaries throughout Africa and Asia. But in Fairfield, the church is struggling to attract new members, and Pastor Crawford believes it’s because of competition from Transcendental Meditation.

Rev. CRAWFORD: From the forefront, it looks like it’s a science and they’ve posed it as a science, but as you start to study it out more, you see that it’s actually Hinduism. 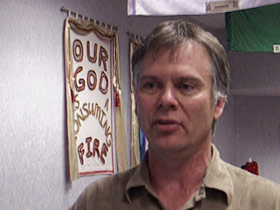 SEVERSON: To attract more attention, the pastor sponsors weekly services where the pulpit and the music rock. Kai Druhl is a former TM’er who actually taught meditation at Maharishi, and is now a convert to Christianity.

KAI DRUHL (Former TM Teacher) (Speaking to Students): Let me explain to you how the whole thing will proceed today.

SEVERSON: He teaches physics at the local community college via closed-circuit TV. Druhl says he has no doubt that TM is derived from Hinduism.

(To Mr. Druhl): Does that mean it’s anti-Christianity?

Mr. DRUHL: It excludes and takes away from the experience of Christ.

Mr. ORSATTI: There’s no doubt in my mind that the practice of Transcendental Meditation has helped me enjoy being a Catholic. 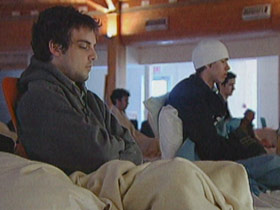 JENOA KOHN (Student, Maharishi University): I’m a spiritual person, but I don’t think that, you know, TM is something that I do that is separate. It’s like brushing your teeth twice a day.

SEVERSON: Virtually all the TM’ers we spoke with insist that TM is a science of the mind, not a religion. But there appears, at least, to be a connection to Hinduism.

The lavish health spa outside of town offers treatments based on a 5,000-year-old Indian holistic medical system called ayurveda.

The official language of the new town on the edge of Fairfield, Maharishi Vedic City, is Sanskrit, the classical Hindu language — although its significance is largely symbolic.

The Vedic architecture recommends that all homes face east to catch the warming rays of the morning sun. Pastor Crawford doesn’t care so much about the architecture. It’s the connection to Hinduism that troubles him.

Rev. CRAWFORD: Hinduism believes in reincarnation, believes in multiple gods; and so with a Hindu philosophy it enables you to embrace Christianity, but with Christianity you can’t embrace Hinduism.

SEVERSON: TM’ers believe any conflict will eventually fade away. They believe if they can accumulate enough mediators in Fairfield and Vedic City, peace and harmony will pulsate from the Iowa prairie throughout the world.