BOB ABERNETHY, anchor: We have a story today about some of the ways drug makers and neuroscientists are enhancing what human brains can do, and what the implications of these developments are. For instance, what if brain researchers someday learn to find out what a patient is thinking? Or to predict a disabling disease? Or, right now, what about so-called “smart pills” that improve a college student’s performance on an exam? Is it fair that only the affluent can afford them? Lucky Severson reports from Austin, Texas. 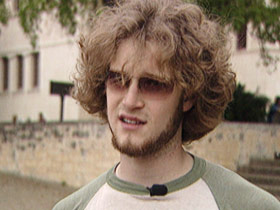 LUCKY SEVERSON: There’s no way of knowing how many college students are popping “cognitive performance enhancers.” But health-care professionals say the use of so-called “smart pills” has been increasing dramatically over the past five years. It comes as no surprise to Charles Brieden, an economics major at the University of Texas in Austin.

CHARLIE BRIEDEN (Student, University of Texas): I would definitely say that most of the kids who use it at least on a, you know, semifrequent basis don’t have a prescription. You know, it’s fairly easy to get a hold of.

SEVERSON: Unlike most students, Charlie has a prescription for the drug he takes, called Adderall. Charlie has Attention Deficit Disorder or ADD. Adderall and another drug, Ritalin, are often prescribed to treat ADD, but a lot of students use the drugs to enhance performance — that is, to help them concentrate and focus and face the stress and tests of modern college life. 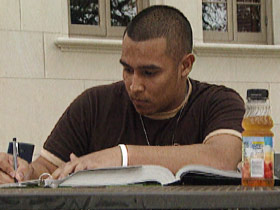 SEVERSON (To Alex Maldonado): Is it very popular amongst the students?

SEVERSON: Alex Maldonado is another University of Texas student, a freshman, who bought one pill of Adderall to cram for an exam.

Mr. MALDONADO: I aced the test so, I mean, I was happy about it. If it wasn’t that expensive, maybe I would take it more often.

SEVERSON: There’s now a relatively new memory-boosting drug known as Modafinil or Provigal that appears, so far, to be an even more effective enhancer with virtually no side effects. But it can cost as much as $200 for 30 pills.

Dr. JUDY ILLES (Neuroethicist, Stanford University): What does it mean to have a college student who can’t even afford an expensive drug like Modafinil — for example, to stay up all night — and versus somebody who is able to have as much Modafinil as they wish?

SEVERSON: Judy Illes is a neuroethicist at Stanford University, and she worries that these powerful new drugs could create an unfair advantage for kids who can afford them. 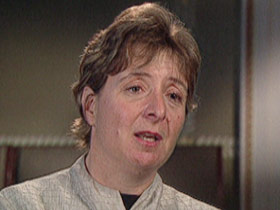 Dr. ILLES: What does that mean for opportunities to individuals and disenfranchised populations and so forth? So there’s a host of very complex issues that come into play there.

SEVERSON: This new science that allows us to enhance, even to alter who we are promises advances that seemed decades away only a few years ago. Now it’s here. Problem is, for every advance, there will be a tradeoff.

Dr. Paul Root Wolpe is a professor of psychiatry at the University of Pennsylvania.

Dr. PAUL ROOT WOLPE (Professor of Psychiatry, University of Pennsylvania): There’s an enormous amount of talk about genetics right now. But in fact, I really think that it’s neuroscience that’s on the cutting edge of the ethical issues that we have in our society — the challenges of neuroscience are happening right now. We can do things now that were science fiction just a short time ago.

UNIDENTIFIED MAN: Those signals go out through the chip.

SEVERSON: For instance, this FDA-approved, privately funded clinical trial that could give Matthew Nagel’s brain the means to move objects. 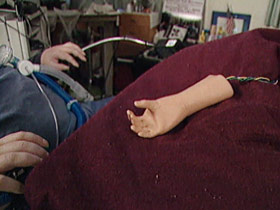 MATTHEW NAGEL: I am going to open the first e-mail, which has congrats. It says, “You are doing a great job.”

SEVERSON: Matthew has been a paraplegic since a car accident four years ago. The object here is to enable him to operate a computer by his thoughts, with the aid of a tiny electrode chip implanted in his brain.

Mr. NAGEL: Now I am going to close the hand.

SEVERSON: John Donoghue is Chairman of Neuroscience at Brown University and founder of Cyberkinetics, Inc.

Dr. JOHN DONOGHUE (Founder, Chief Scientific Officer, and Director, Cyberkinetics, Inc.): These kinds of devices kick off a whole new age of neurotechnology developments in which we can create medical devices that can cure a whole host of diseases.

Mr. NAGEL: I can’t put it into words. It’s just — I use my brain. I just thought it. I said, “Cursor go up to the top right.” And it did, and now I can control it all over the screen. It will give me a sense of independence.

SEVERSON: Stanford law Professor Hank Greely says the chip adds something to the human dimension that wasn’t there before. 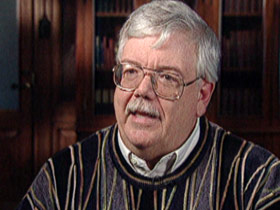 Professor HANK GREELY (Professor of Law, Stanford University): When we get into people talking about various implants to either put new sensory — you give humans new senses, or allow humans by thinking to control devices externally, that becomes a little more troubling. To a lot of people, the idea [is] that somehow we’re transcending what we’re supposed to be as humans.

SEVERSON: In the popular thriller THE MANCHURIAN CANDIDATE, a brain implant prompts a man to become an assassin. That scenario is no longer science fiction. Scientists say the technology to modify our personality or memory is barely around the bend.

SEVERSON: Michael Gazzaniga is Director of Neuroscience at Dartmouth College.

Dr. GAZZANIGA: Two years ago, I would say, three years ago, no one would imagine that in a brain-imaging environment you could begin to understand how people go about doing moral reasoning. And that is now happening.

SEVERSON: Gazzaniga is author of THE ETHICAL BRAIN. He thinks our brains are all wired with similar moral circuitry — at least those of us considered normal. 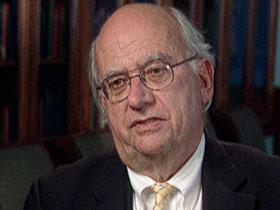 Dr. GAZZANIGA: We don’t kill. We don’t like incest. We don’t like cheaters — the guess is that there’s something, probably some moral spark, that’s in us. Some moral compass is guiding us through all this social behavior.

SEVERSON: That would mean that a secular person may have the same moral values as a religious one. It’s a controversial conclusion.

Dr. GAZZANIGA: I’m not antireligious in any way, shape, or form. It’s none of my business how you got to your, your set of moral values. I think what’s happening is, though, we’re going to find out that everybody in the room basically has their brain built in such a way that they tend to respond in a particular moral way, because [of] the way their brain is built.

SEVERSON: It’s all possible because of magnetic resonance imaging, MRI, that is becoming so sophisticated neuroscientists are able to identify what kinds of thoughts and emotions stimulate certain parts of the brain.

SEVERSON: Professor Greely says a potential negative side of the neuroscience revolution is the ability to predict someone’s physical or mental illness.

Prof. GREELY: If your insurer can figure out well in advance that you’re going to have Parkinson’s disease or Alzheimer’s disease, then that could be pretty significant in terms of whether you can get long-term care insurance. 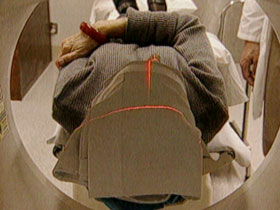 SEVERSON: And there’s more. Until now, our thoughts were our own.

Dr. WOLPE: We may actually be able to breach that barrier and extract directly from your brain information that before, we could only get by you choosing to tell it to us. That’s very, very new. And it raises profound questions about privacy.

SEVERSON: There are many troubling questions that have profound implications, some ethical, some physical. The smart pills, for example, so popular on campus — it’s too early to tell if they have dangerous side effects.

Dr. GAZZANIGA: The safety and efficacy of these drugs is simply not known. The possible side effects, in terms of real damage to the nervous system, hasn’t even begun to be worked out.

SEVERSON: Ultimately, the bigger question, in the view of Professor Wolpe, is the question of values. 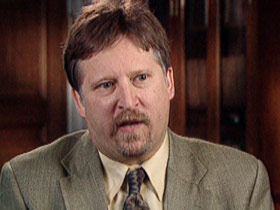 Dr. ROOT WOLPE: Do we want to say that some path to self-improvement is ennobled by the struggle? Or are we okay with the idea that there’s a quicker path to enlightenment?

SEVERSON: The answer is not entirely clear. Take Fiorella Vargas, a George Washington University graduate. She survived college without the help of cognitive enhancers.

FIORELLA VARGAS (Graduate, George Washington University): It is very — it’s very stressful. So, but you deal with it. And you get beyond it. And then you are proud once graduation day comes.

SEVERSON: Charlie, on the other hand, wouldn’t think twice.

SEVERSON: The question that can’t be answered yet is whether smart pills and brain technology actually enhance us, or prevent us from discovering and developing who we really are.