BOB ABERNETHY, anchor: Last week here we reported on the new emerging church movement, the effort among both evangelical and mainline Protestants, especially those in their 20s and 30s, to create new ways to do and look at worship. One of the most influential leaders in the emergent church is Brian McLaren, a pastor from Maryland. Today, Kim Lawton talks with McLaren and explores the controversy surrounding some of his views. 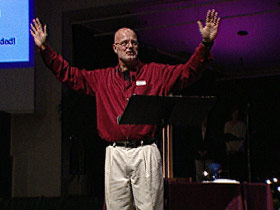 KIM LAWTON: Brian McLaren doesn’t look like a revolutionary. He calls himself a “middle-aged, bald introvert with a small Buddha belly.” And at first glance, he seems like a pretty typical evangelical pastor whose nondenominational community church reaches out to unbelievers. But in fact, McLaren is at the forefront of a controversial new effort to rethink Christianity for a new generation.

Pastor MCLAREN: What I think many of us are concerned about is, how can we go back and get reconnected to Jesus with all of his radical, profound, far-reaching message of the kingdom of God?

LAWTON: The emerging church movement seeks to apply that message in a contemporary, postmodern culture and is developing new ideas about worship, theology, and mission. McLaren’s provocative writings have become a manifesto of sorts for many in the emergent conversation. But he’s also generating intense controversy, especially among conservative evangelicals. 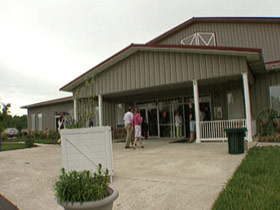 LAWTON: McLaren grew up in a conservative evangelical background, but has no formal theological training. He’s a former college English professor who became pastor of Cedar Ridge Community Church, in Burtonsville, Maryland, which he helped found in 1982. He began writing about a growing frustration over the way Christianity was being practiced in many evangelical churches.

Pastor MCLAREN: In my travels, where I speak and where people talk to me about my books, they say to me again and again: “The people who are the normal spokespeople for the Christian faith don’t speak for me. They don’t represent me. That approach to faith is not my approach.”

LAWTON: McLaren outlined a new vision in his 2004 book, A GENEROUS ORTHODOXY, where he urges Christians to move beyond traditional categories.

LAWTON: Many churches in the emergent movement have adopted McLaren’s call for a faith that integrates elements of different Christian traditions. McLaren describes himself as evangelical, charismatic, fundamentalist, Anabaptist, Anglican, and Catholic — among other things. 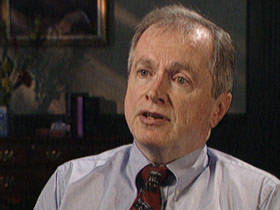 Prof. CARSON: At the end of the day, it becomes a kind of very isolated, new form of individualism, in which I pick up what I want from these things, rather than in fact belonging, honestly, to any of them. Instead of being all of these things, he really isn’t any of them.

LAWTON: But McLaren insists a more open view enriches faith and better equips Christians for ministry. He’s become a strong voice urging more attention to issues from poverty to the environment to social justice. He’s been active in the effort to raise more attention to the atrocities in Sudan’s Darfur province.

LAWTON (To Pastor McLaren): You’re pretty critical of many Christians’ focus, emphasis on personal salvation after death. Why is that?

Pastor MCLAREN: Well, first of all, I’m not at all against the idea of a personal relationship with God. I think that’s where it all begins. And I think this is part of the beauty of the message of Jesus. Every individual is invited into a personal relationship with God. But personal is not private. The church has been preoccupied with the question, “What happens to your soul after you die?” As if the reason for Jesus coming can be summed up in, “Jesus is trying to help get more souls into heaven, as opposed to hell, after they die.” I just think a fair reading of the Gospels blows that out of the water. I don’t think that the entire message and life of Jesus can be boiled down to that bottom line. 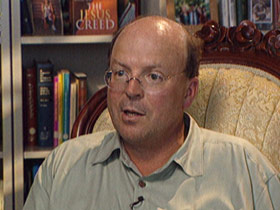 SCOT MCKNIGHT (Professor, North Park University): He’s asking hard questions, and he’s not letting people get by with shallow answers. So, he’s forcing conversation about topics that are kind of sacred cows in the evangelical church.

LAWTON: McLaren’s latest book, THE LAST WORD AND THE WORD AFTER THAT, urges Christians to reassess conventional views of hell.

Pastor MCLAREN: One of the deepest problems is that — and nobody ever would intend this — but that for some people, the traditional view of hell makes God look like a torturer. My purpose is to get conversation going about the old view and problems with it so that we can together move forward in reconsidering, and maybe there is a better understanding of what Jesus meant and what the scriptures mean when they’ve talked about issues like judgment, justice, hell.

LAWTON: McLaren never says exactly what that better understanding might be, just as he declines to take specific stands on other controversial issues for the church, such as homosexuality. 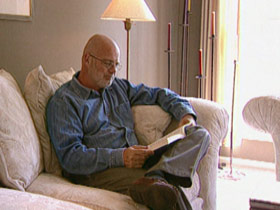 Pastor MCLAREN: Well, you know, a couple people tell me they think I’m being evasive. They think I’m a coward, I’m afraid to say what I really think. But here’s the interesting thing. I don’t think I’d be saying what I’m saying if I was a coward. I’m saying that because I’m trying to be faithful to God, I’m trying to be faithful to the teaching and example of Jesus. So it’s my fidelity to my understanding of the Christian message that makes me say sometimes, “We’re asking the wrong question.”

LAWTON: McLaren believes Christians must always question their own interpretations of Scripture. The Bible, he says, is not a “look-it-up encyclopedia of moral truths.”

LAWTON: It’s here that critics like Professor Carson have the most problems with McLaren.

Prof. CARSON: The historic good news of the gospel, right across the centuries, has always been concerned not only with excellent relationships and who God is and turning from that which is evil. But it has also been concerned to confess certain things as true. 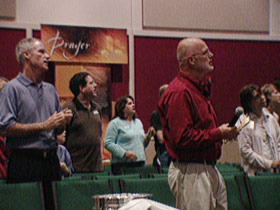 Pastor MCLAREN: I look back in history and I think, you know, for a long time people who believed in Jesus, believed in the Bible, either tolerated or actively defended slavery. I think ethically, out of faithfulness to God, we’ve got to realize that people in the name of the Christian faith have done some horrible things. And so we always have to be open to places where we’re wrong.

LAWTON (To Pastor McLaren): Are there truths related to the faith out there that we can know, that we can be certain about?

Pastor MCLAREN: First of all, when we talk about faith, the word “faith” and the word “certainty,” we’ve got a whole lot of problems there. What do we mean by “certainty”? If I could substitute the word “confidence,” I’d say, yes, I think there are things we can be confident about, and those are the things we have to really work with.

Prof. CARSON: Human beings can know things, not with the certainty that belongs only to God, but with all kinds of degrees of certainty on which you base your life. The kinds of knowledge that are appropriate to human beings.

LAWTON: McLaren is careful to emphasize that he doesn’t speak for everyone in the emerging church movement. But he’s clearly struck a chord with many. Now he’s stepping back from many of his responsibilities at Cedar Ridge Church so he can devote more time to expanding the emergent dialogue in other parts of the world.

Pastor MCLAREN: If we see this thing turn into something that has real implications for health and well-being in our world, that to me has a lot of the feel of God’s will being done on earth as it is in heaven, which is something all of us Christians pray for.

LAWTON: Only then, he says, will the emergent conversation truly be a movement. I’m Kim Lawton reporting.