BOB ABERNETHY, anchor: As supplies and volunteers poured into the Gulf Coast this week and rescuers continued their search for survivors and bodies, it’s estimated that more than one million people from Louisiana alone have fled their homes, many to shelters and new lives in all parts of the country, where they are receiving consolation and hospitality. 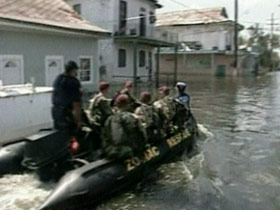 In New Orleans, rescue workers and troops went door to door looking for the living and the dead, sometimes removing residents by force. The rescuers marked each house where there was no one left. Huge semis carried bodies to morgues, and federal officials ordered 25,000 body bags. Boats remained the best way to get the remaining residents to safety. The water began to go down, but it is reportedly dangerously polluted.

Supplies arrived from around the world, and officials said donors in the U.S. have already contributed more than $500 million for relief. At the same time, Katrina survivors have been evacuated to emergency centers such as the Astrodome in Houston and also to communities throughout the U.S., where residents have welcomed them and children have started school.

There were also a few people who had fled the city who were allowed back in. One of them was the Episcopal Bishop of Louisiana, Charles Jenkins, and Deborah Potter went with him. 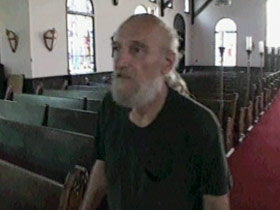 DEBORAH POTTER: The water still stands 18 inches deep at Carrollton Presbyterian Church in New Orleans. It’s impossible for a car to go any farther down the road, where other churches are said to be submerged or destroyed. Two weeks after the hurricane hit, clergy and parishioners are finding their way back into the city for the first time to see how bad things are.

William and George Hoehn returned to their home parish, St. George’s Episcopal, to check on conditions inside.

They found puddles in the parish hall and mold on the cushions, but the damage was not as extensive as they feared.

GEORGE HOEHN: We figure if looting hasn’t happened by now, it’s not going to happen at all.

POTTER: There’s a good reason people feel safe now. The military is everywhere. But one of their main jobs is to clear everyone out. 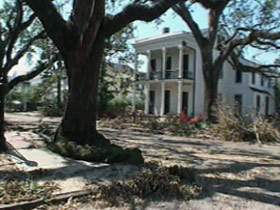 Episcopal bishop Charles Jenkins of the Diocese of Louisiana is on his way in. He’s heard that Christ Church Cathedral in the Garden District is under eight feet of water.

Bishop CHARLES JENKINS (Diocese of Louisiana): New Orleans is not going to be the same.

POTTER: The damage to churches and synagogues here in New Orleans means nobody knows when they’ll be able to reopen. Besides, the parishioners are gone. Hundreds of thousands of people have moved up the road to Baton Rouge.

The Catholic Archdiocese of New Orleans had one of the largest parochial school systems in the country, with 50,000 students. Some of them have already started classes in Baton Rouge. Our Lady of Mercy took in 175, outfitting them with uniforms, books and backpacks in a matter of days. But church officials insist it’s only temporary. 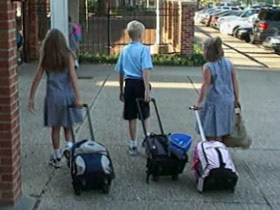 POTTER: Some of the tiniest survivors of Hurricane Katrina have found a temporary home at First Baptist Church, now a shelter for mothers with infants. First Baptist is working with other downtown churches of different denominations to provide food, support and supplies, which keep pouring in from as far away as Michigan.

STU KAIL (Grace Church, Jackson, Michigan) A lot of it was the Internet. Everyone kind of came together, and here we are.

SAMANTHA CORNELIUS: They’ve been really good to us. It’s a blessing how people can open their hearts, being from the community that we’re from. 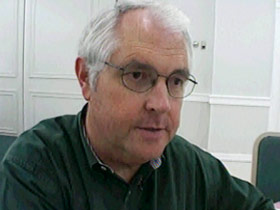 POTTER: Poor black survivors have been welcomed by a mostly white church that’s had no experience with this kind of relief ministry. How has the congregation managed?

Pastor BURN PAGE (First Baptist Church): I don’t know. I think it is God’s grace day by day, and his grace is sufficient, and it has been. His grace has been seen in a lot of different ways, the way some people have come here and then reunited with their families.

POTTER: After being separated for almost two weeks, Sequin and Shelita Brimmer found their sister, Dorothea Lodge, at First Baptist, along with her baby girl, Havan, born two days before the storm roared through.

SHELITA BRIMMER: We know God is in full control of the whole situation. This could never happen had he not done this. We know it was God. Nobody but Jesus could have done this.

POTTER: For the congregation of First Baptist, it’s all been a learning experience. 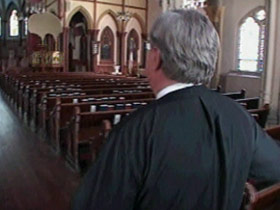 Pastor PAGE: I think what they’re learning is that they’re learning what church is all about. A lot of times church is something that we go to for an hour or two on Sunday, and then we forget about it until next Sunday. God has commissioned us to reach people and to care for people, and that’s what they are doing. They’re actually living out what being the church truly means.

POTTER: Churches have called in trained professionals, too, of course. Victim-relief chaplains are ministering to the homeless jamming evacuation centers in Baton Rouge.

In New Orleans, Bishop Jenkins is getting his first look at the historic cathedral, built 200 years ago this fall.

POTTER: The building is almost unscathed, the stained glass windows glorious in the sunshine.

POTTER: The bishop heads off to pack his vestments, but he’s leaving his Advent robes behind, hoping to be back in time to celebrate the season that begins in less than three months.