BOB ABERNETHY, anchor: For members of St. Nicholas Greek Orthodox Church, which was totally demolished on 9/11, this anniversary serves as a reminder of how long it’s taking to rebuild. Kim Lawton reports.

KIM LAWTON: Four years after 9/11, it’s still hard for lifelong New Yorker John Pitsikalis to visit Ground Zero. The fenced in pit there represents for him a dual tragedy — the terrorist attacks and the destruction of St. Nicholas Greek Orthodox Church, his parish church.

JOHN PITSIKALIS (Board President, St. Nicholas Greek Orthodox Parish): It was, you know — well, let’s face it, it was the loss of life that really was the unbearable part, you know. But, you know, losing that, you know, you always need your faith in hard times, and here when I want to go to church, my church is gone.

LAWTON: St. Nicholas had stood, literally, in the shadow of the Twin Towers. The tiny, three-story box-like structure had originally been a house built in the early 19th century. Greek immigrants acquired the property in the early 1920s and turned it into a home for their fledgling congregation. Pitsikalis’s grandfather was one of the founders of the church. 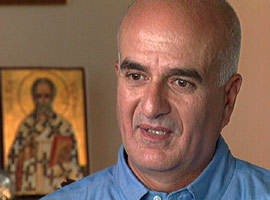 Mr. PITSIKALIS: He was in the travel business, and he had a hotel, and they would use that dining room every Sunday for services.

LAWTON: Pitsikalis says his earliest childhood memories are of attending Holy Week services at St. Nicholas Church with his grandfather. Today he is president of the parish’s board.

This is what St. Nicholas looked like just before 9/11. About 70 families were members, but Pitsikalis says the small church also had a wide ministry as a place of prayer for people who worked on Wall Street.

PITSIKALIS: Wednesdays were amazing, because we would open our church every Wednesday from 11 o’clock until 3 o’clock. And people would come in who were not necessarily Greek Orthodox but just wanted a place of solitude, and maybe contemplate for a little bit. And the church was actually quite crowded every Wednesday.

LAWTON: John Couloucoundis’s family is in the shipping business. He says his father got involved with the church because St. Nicholas is the patron saint of sailors.

JOHN COULOUCOUNDIS (Fundraising Committee Chair, St. Nicholas Greek Orthodox Parish): There was a lot of history in that church, a lot of people that had brought icons or had contributed to make it really a little gem. But the thing you sensed more in St. Nicholas was this close-knit community, these people who had been involved with the church for generations and supported it. 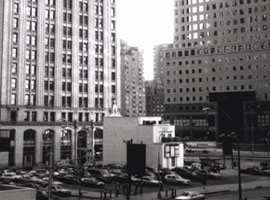 LAWTON: Then came Sept. 11, 2001. As the towers around it began to fall, the tiny church never had a chance.

Mr. PITSIKALIS: That day was a nightmare. The debris from the south tower literally pancaked our church. You know, it was an unbelievable amount of debris on it.

Mr. COULOUCOUNDIS: The destruction was so complete it was amazing that we found anything at all.

LAWTON: A few remnants were dug out of the rubble: two torn icons, a charred Bible, three wax candles intact but fused together from the heat.

Church officials also found some liturgical items, including a twisted candelabra. But precious relics, including bone fragments of Saint Nicholas himself, were never recovered. The church was in shock, but the determination to rebuild was immediate.

Mr. COULOUCOUNDIS: Within about two weeks after the destruction of the church the parish had already organized, was having meetings, and was trying to figure out how to go forward.

Mr. PITSIKALIS: We weren’t going to leave that part of New York, you know. We never for one moment thought of relocating our church to another location. We were going to stay where we were founded. Where that work station is right across the way was really — with the four flags, that’s where our church stood. That’s exactly the spot. 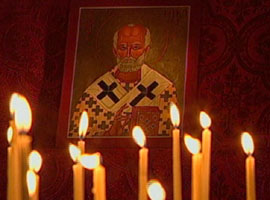 LAWTON: But four years later they still don’t have a church. St. Nicholas is irrevocably tied to the future of Ground Zero. The church cannot rebuild or even draw up design plans until all of the complex ownership, security and architectural issues surrounding the World Trade Center site are sorted out.

Mr. COULOUCOUNDIS: The assurances that we have from the state, the federal level, the city level is that the church will be rebuilt. I think that one of the problems is the logistics of doing that amidst all the other demands and constraints of the Ground Zero area.

LAWTON: John Couloucoundis is head of the parish fundraising committee. He says in addition to being a parish church, the rebuilt St. Nicholas will include an interdenominational center that will focus on the spiritual side of 9/11.

Mr. COULOUCOUNDIS: We’re not a big parish, but we’ll have hundreds of thousands of people from all over the world wanting to stop by and spend some time in there to reflect. It’s a place where we can all come together and think about what happened and maybe spend a little time thinking about how to avoid such a thing in the future.

LAWTON: In the meantime, St. Nicholas parish members are worshipping at a Greek Orthodox church in Brooklyn. They are trying to be patient, but they’re anxious to move ahead.

Mr. PITSIKALIS: We do have a lot of older members and, you know, they’re getting frustrated. They want to be alive to see that church built.

LAWTON: Pitsikalis says the ordeal has strengthened his own faith and brought his parish together.

Mr. PITSIKALIS: It’s like, you know, when you lose a, you know, family relation. You know, you all cling together more than ever, and we depend on each other.