BOB ABERNETHY, anchor: Our Belief and Practice segment today is on how two young American Muslims observe Ramadan, the month-long time of fasting and prayer from sunrise to sunset. Zuleqa and Khizer Husain of northern Virginia told us about both their daytime practices, which can include an hour or more of reading the Qur’an, and their evening meal, which can become a party.

ZULEQA HUSAIN: The obvious difference between Ramadan and the other months is that your whole schedule is changed. You’re eating twice a day, at odd times of the day. The first is the early morning breakfast.

KHIZER HUSAIN: Muslims are not ascetics. They don’t prescribe monasteries. You’re supposed to engage in worldly life as well as the spiritual life. During the month of Ramadan, in addition to prayer you have fasting, so it comes back to having a better focus on what’s really important in life. 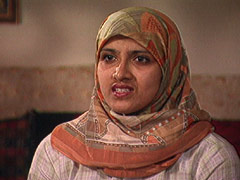 Ms. HUSAIN: Ramadan is, for me, like a spiritual tune-up. The whole year I pray five times a day, but not thinking very consciously about it. Fasting, for me, is a constant prayer that you’re engaged in throughout the day. For 12 hours or more, you’re praying. The 10 minutes that you do, for example, in the morning, is now extended to a continuous prayer called “the fast.”

(Praying): There is no God except Allah, and this is the truth.

Living in America, you will not probably hear a call to prayer from a mosque nearby. When I’m at work, the easiest way is to look it up online. There are some good Web sites, which you put in your zip code and it will tell you these are the times for your prayer.

(To Colleague Ahmed Younis): Do you want to pray? It’s one o’clock.

Spirituality in Islam is about how close you are to God. I consider Allah to be my friend. When I’m praying, for example, it’s more like a conversation. Not of equals, of course; God is superior. He’s the Almighty. 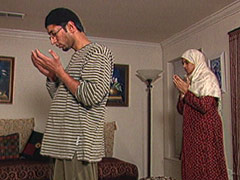 Mr. HUSAIN: For me, my relationship with God really comes from the Qur’an. Muslims feel those are the literal words of God. So when we recite the Qur’an — which is the recommended way — it’s really speaking the words of God. It’s having this dialogue with your creator. Whenever I want to be close to God, it’s a matter of pulling on that, going to the book, reciting it or hearing it recited. Those intonations really strike a chord in my heart.

Ms. HUSAIN: Because the Qur’an was sent down during this month, it is prescribed to read the entire book. It’s very conveniently divided into 30 chapters, one chapter a day.

Mr. HUSAIN: In the States, we have a lot of options when it comes to breaking the fast. There’s typically sponsored dinners so everyone has the breaking of the fast, the prayer as well as the meal.

Ms. HUSAIN: Before breaking the fast, there’s a very nice prayer. The Holy Prophet, peace be upon him, broke his fast with dates and water. Especially in America, I think, Ramadan is as spiritual and family-oriented and friends-oriented as you want it to be. I could sit at home and break my fast, but the celebratory feeling — the holiday spirit — comes when you meet with family and friends. That, in itself, adds to the spirituality of the month.