BOB ABERNETHY, anchor: In Iraq this weekend, the long-awaited countrywide vote on the new constitution.

There were celebrations in Baghdad after last-minute changes in parliament designed to win support for the constitution from the minority of Sunni Muslims. As copies of the proposed constitution were distributed, Shiite Muslims and Kurds seemed overwhelmingly in favor. Sunnis were said to be divided.

Analysis now of the situation on the ground from Anthony Shadid — an Oklahoma-born, Arabic speaking, Pulitzer Prize-winning reporter for THE WASHINGTON POST. Shadid has written a moving new book, NIGHT DRAWS NEAR, about everyday Iraqi life – and death.

In our interview, Shadid spoke of two influences on Iraqis — guns and the major types of Islam.

ANTHONY SHADID (Foreign Correspondent, THE WASHINGTON POST and Author, NIGHT DRAWS NEAR): Guns, obviously. There is a culture of violence. There is a sense of men with guns determining politics in Iraq. I think just as important, perhaps more important, is that role that religion plays in Iraqi society. It’s almost the exclusive axis on which politics, on which resistance, on which protest revolves, and that’s something new in Iraq, I think. Among the insurgents it’s very, very — it can become a very militant ideology. It can legitimize any kind of resistance against a perceived enemy.

ABERNETHY: Once, says Shadid, Shiite Muslims and Sunni Muslims in Iraq got along so well it was an insult to ask someone which sect he belonged to. Now the differences are sharper.

Mr. SHADID: I think there [are] growing signs of a hardening of this ideology, of what you might call a religious absolutism that’s being increasingly embraced by more and more people. It’s hardening the lines between sects and ethnicities, between Shiites, Sunnis, and Kurds, and it’s sometimes hard — it creates a gap that’s hard to bridge. It’s harder and harder to see a voice that is national, that speaks for all Iraqis.

ABERNETHY: Shadid says extreme fundamentalist Islam is used by the insurgents as what he calls a “cloak” to justify the killing they think will force American troops to leave. 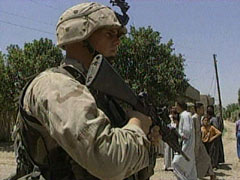 Mr. SHADID: It’s a very tactical move by the insurgents. They understand that they’re not going to defeat the American military on the battlefield, that it is impossible. They do think they can defeat the Americans in the realm of perceptions, that they can create this perception of failure. And you create this perception of failure by inflicting more carnage, you know, creating an image of chaos, of anarchy. And it’s a spectacle, and you have to keep creating the spectacle, and to keep that spectacle you have to keep killing more people and more people.

ABERNETHY: But how do the insurgents explain using Islam to justify the killing of innocent people?

ABERNETHY: Even after this week’s changes in the proposed constitution, Shadid is concerned that violence will continue whether the new document is approved or rejected. 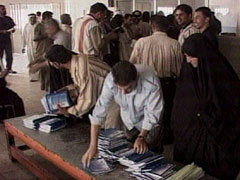 Mr. SHADID: It all hinges on the Sunni Arab reaction to this constitution, the Sunni Arabs being the community that’s probably most involved in the insurgency. You know, if the constitution is approved, it will probably deepen Sunni Arab resentment and in a way deepen the insurgency. You have them probably feeling even more disenfranchised than they are today. If it’s rejected — there already is a civil war under way in Iraq. We haven’t maybe acknowledged it as such, but when you look at competing agendas, the competing factions, the — you know, rivalries between communities and within communities, it already is a civil war. I guess the fear is that you would intensify that civil war.

ABERNETHY: So should or should not American troops be brought home? Shadid acknowledged the fear that if U.S. troops were to leave there would be more chaos. But he says he hears more and more people in Iraq calling withdrawal the key to stability.

Mr. SHADID: It’s hard for me to see the political process, as it is now, working. I just don’t see how it works unless you have some kind of move toward reconciliation. How do you bring the Sunni Arabs into the political process? And it’s difficult to see that happening as long as they view an occupation in place. And I guess the only way to end that occupation is either through a timetable for withdrawal or withdrawal itself.

ABERNETHY: I told Shadid the situation in Iraq, as he described it, sounded hopeless.

Mr. SHADID: You know, I tell you, I — and sometimes I personally, just as a person, as a person, as a reporter there feel bleak. But then I think back, you know, there is a quality that I think Iraq is really remarkable for, and that’s resilience. And I think we’ve seen that resilience time and again. Their resilience is being tested, there’s no question. I think, you know, good friends of mine who’ve been the most optimistic are sometimes very bleak in their comments. But I think it’s still there. I think it’s the best hope for the country as it tries to get past this.