BOB ABERNETHY, anchor: Developments this week in the national battle over how to teach evolution. In Dover, Pennsylvania, where the school board had voted to teach both evolution and competing theories, eight of the nine board members were up for reelection, and all eight were defeated. Meanwhile, in federal court the trial over the issue ended, with a decision expected by early January.

In Kansas, a different course. The conservative majority on the state board of education opened the way for teaching intelligent design along with evolution. Fred de Sam Lazaro reports. 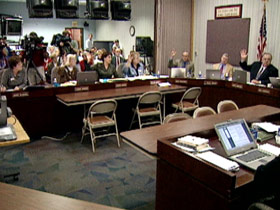 FRED DE SAM LAZARO: The vote was six to four to allow both evolution and alternative ideas to be taught in science classes.

Kansas’s board of education has seesawed three times on this issue since 1999. On Tuesday, evolution critics, once again a majority, voted to revise and rewrite science standards.

Evolution, the theory that all organisms descended from a common ancestor, is widely accepted as a cornerstone of biology. Kansas will now also permit other ideas, including intelligent design. It holds that some biology is so complex that it could only be the result of design. No designer is mentioned, but critics say intelligent design is disguised creationism, a religious view.

JANET WAUGH (Kansas Board of Education): Comments have been made by board members such as, “Evolution is an age-old fairy tale and you can’t believe in evolution and the Bible; you must make a choice,” among others, you know. But those are ones that came to mind. I think that — why not be honest and admit it? It’s a faith issue. 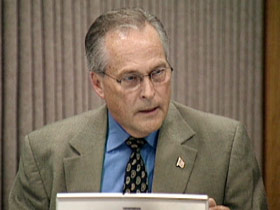 KENNETH WILLARD (Kansas Board of Education): Any introduction of any criticism of evolution or the consideration of it is a challenge to the blind faith in evolution that some people want to hold. Now that’s where the faith issue comes, as far as I’m concerned.

DE SAM LAZARO: Supporters insisted the revised standards broaden the science curriculum. But the National Academy of Sciences disagreed and revoked its permission for Kansas to use its national science guidelines. The academy said the Kansas board had changed the definition of science by omitting a key sentence that says science can rely only on natural explanations. But the board’s chairman insisted that does not mean allowing for the supernatural.

STEVE ABRAMS (Kansas Board of Education): And you keep saying it’s supernatural. It’s not supernatural. There’s nowhere that it is supernatural, that it’s mentioned, and consequently, that’s not the case. 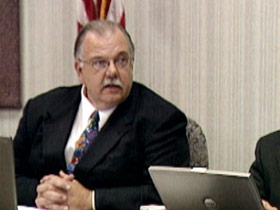 Mr. ABRAMS: It is to discuss what is the natural, to discuss ideas and origins and explanations for natural phenomen[a]. Period.

DE SAM LAZARO: In a room packed with media, there was concern for Kansas’s image.

Ms. WAUGH: We’re becoming a laughingstock not only of the nation but of the world.

Mr. WILLARD: I just went to a national meeting, and nobody laughed at me. And as a matter of fact, I had a number of people come up and tell me that, to keep up the good work.

DE SAM LAZARO: The new standards approved by the board face a few hurdles before they can make it into a classroom. For one thing, rewriting those standards will take months, a period that will see new elections to the state board of education. There could also be lawsuits to invalidate the new standards. For RELIGION & ETHICS NEWSWEEKLY, this is Fred De Sam Lazaro in Topeka, Kansas.

ABERNETHY: As many Americans debate evolution and intelligent design, Pope Benedict XVI on Wednesday used language some observers interpreted as a reaffirmation of divine guidance. He described the natural world as “an intelligent project.” Here at home, televangelist Pat Robertson said the voters in Dover, Pennsylvania who threw out eight members of their school board had rejected God.