BOB ABERNETHY, anchor: Now, another in our series on Faith and Family in America. Today, a special look at African-American families, especially the poorest of them. In recent years, there’s been a dramatic growth in the black middle class. But poor black families endure huge problems — high rates of divorce, single parents, and out-of-wedlock births. At the same time, African-American women are very religious. According to a RELIGION & ETHICS NEWSWEEKLY poll, 81 percent of them say religion is very important in their lives.

Why are so many poor African-American families in trouble, and what are their churches doing to help? Lucky Severson has our special report. 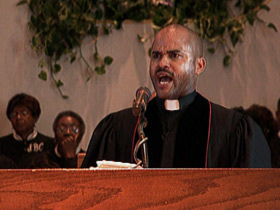 Pastor DARRELL ARMSTRONG (Shiloh Baptist Church, Trenton, New Jersey) (During Sermon): The issue is about what is going on in American families today, in the 21st century in the year our Lord 2005.

LUCKY SEVERSON: Pastor Darrell Armstrong at the podium of the Shiloh Baptist Church in Trenton, New Jersey. His sermon is devoted to the status of families in America, especially black families.

SEVERSON: It’s a constant theme of Pastor Armstrong, maybe because he grew up a physically abused victim of a broken home, but also because he agrees with a recent study which concludes that black families are in “a state of crisis unmatched since the days of slavery.”

Pastor ARMSTRONG: I fully agree with it, and I think anyone of African descent who would disagree with that is not living in this world.

Reverend EUGENE RIVERS (Co-Founder, Seymour Institute): Over the past 25 years, I have seen the complete unraveling of what has been understood for all of our history in this society to be the black family.

SEVERSON: The Reverend Eugene Rivers and the Seymour Institute he founded released the alarming report on black families — one that’s similar in tone to a warning from the late Senator Daniel Patrick Moynihan 40 years ago that black families were falling apart. 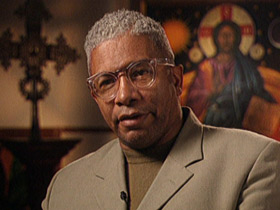 SEVERSON: Reverend Rivers’s report draws from some distressing facts of life among mostly poor black families. As many as 65 percent of first marriages end up in divorce. Forty-five percent of all black families are headed by single women, and 70 percent of African-American children are being born out of wedlock.

Rev. RIVERS: We have higher pregnancy rates. We have phenomenally high sexually transmitted disease rates. If the statistics that exist for blacks existed for whites, there would be a national summit every week on how to save our children.

SEVERSON: A majority of the kids at this neighborhood center in Boston run by Reverend Rivers don’t have fathers at home. Jimmy Dauphine and Derrick Patrick are mentors, trying their best to be substitute fathers.

JIMMY DAUPHINE (Ella J. Baker House): Eighty percent of the kids that work here right now are foster kids. They have no sense of family, and actually we become their family. We look out for their homework, see how they are doing at school, check out the teachers.

DERRICK PATRICK (Ella J. Baker House): These kids here, they really need structure. They want somebody to tell them, you know, that’s wrong — little things like that, you know, the American family would take for granted. 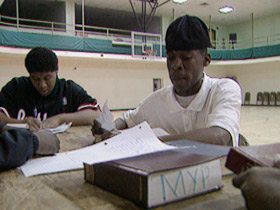 SEVERSON: Other studies conclude there is a huge positive impact on African-American children who are brought up in two-parent families. They are happier, do better in school, and are far less inclined toward delinquency. But it’s quite a different story for kids who are brought up by a single parent or in a broken home.

Rev. RIVERS: Father absence is the single most important independent variable affecting or correlated with incarceration rates for young males.

SEVERSON: Consider this. One in three black men, over their lifetime, will spend time in jail or prison. Derrick knows personally the price of not having a dad around.

Mr. PATRICK: If my parents, my father doesn’t care enough to be in my life, why should I care about the person walking down the street? I can just go rob you.

SEVERSON: Fatherless families are the single largest cause of poverty in the black community.

SEVERSON: But Ladonnia Whittaker is determined she is going to beat the odds. She, her two children, nine-month-old Trinity and seven-year-old Makhi, and her mother, Maria Peterson, live with Ladonnia’s grandparents. Their story is not unusual. Maria’s rocky marriage disintegrated when her abusive husband got hooked on drugs. 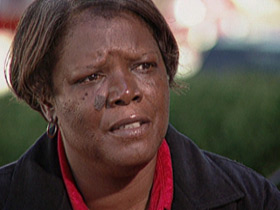 MARIA PETERSON: I got on drugs, too. He wound up going to prison and everything.

SEVERSON: Was this tough on your kids?

Ms. PETERSON: It was, it was. It was real tough.

SEVERSON: Maria had two children by two different men. So did her daughter. Researchers say it is increasingly common for African-American women to give birth to children of different fathers.

Pastor ARMSTRONG (During Sermon): Monogamy and fidelity are issues that we must adhere to.

SEVERSON: After Ladonnia delivered Trinity she got sick, unable to work. Neither could Maria, who had to take care of Ladonnia’s kids.

Ms. WHITTAKER: So by me being in the hospital and the bills started adding up and the rent wasn’t getting paid, so we had to lose it. I mean, we lost it. We got evicted.

SEVERSON: Ladonnia says she’s a good mother and will make the best of her circumstances, for which she blames only herself.

Ms. WHITTAKER: I chose not to go to school. I chose to have my son and to raise my son. So that was my choice. I can’t blame anybody else for that.

SEVERSON: Wouldn’t it be easier if you had a husband?

SEVERSON: Jimmy and Derrick think they know why black women are reluctant to marry black men. 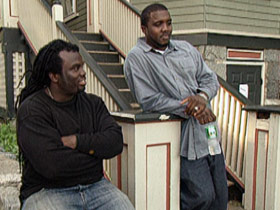 Mr. DAUPHINE: One of the problems that I see personally is that the fathers, especially young fathers — I would say anywhere between 20 and 45 — some of them seem to be disempowered, like there’s a sense of hopelessness.

Mr. PATRICK: Because of black people being disenfranchised, it makes it a little harder actually. You know what I am saying? Economically and everything, it is just a little harder to do things.

Pastor ARMSTRONG (During Sermon): You know, my belief is if it took two to make the child, you ought to have two to raise the child.

SEVERSON: Everyone we spoke with agrees that African-American families — particularly in the inner city — need help. But they also say there are some extenuating reasons why they are in such a predicament.

Pastor WALLACE CHARLES SMITH (Shiloh Baptist Church, Washington, DC): You can’t understand the African-American family and its plight unless you understand what happened during slavery.

Pastor SMITH: I mean, it was an intentional attempt for several hundred years to destabilize families. It was for the good of the slave system not to have strong families.

SEVERSON: How much of it is economic, do you think?

Pastor ARMSTRONG: Well, economics is the new — I think the new face of racism is not black and white or brown or yellow. I think it’s green.

SEVERSON: Blacks have always taken a back seat in terms of economic opportunity. Experts say African Americans are often the last hired and the first fired. When jobs moved to the suburbs, blacks were still stuck in the inner cities. The unemployment rate compared to whites is still two to one, and 30 percent of all black families live below the poverty level. 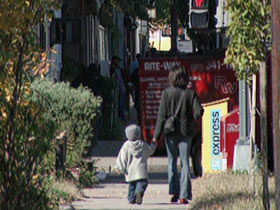 Rev. RIVERS: The welfare system has contributed. It was the development of a welfare system that penalizes women for having fathers in the household — that there again promoted, directly or indirectly, a culture of poverty.

SEVERSON: Another factor eroding the black family, most everyone concurs, is the pervasive culture of sex that confronts parents of all races.

Pastor SMITH: Irresponsible sexuality jumps at us from every media outlet imaginable. And you know, I mean, people with means who can go to better schools are probably a little better insulated from that. It’s like an electric cord, you know. If you take the rubber off it, then anybody can be electrocuted by it.

Mr. DAUPHINE: The most successful people in the neighborhood are, like, drug dealers, pimps, or what have you, because the people who are supposedly successful in black society move to the suburbs, so you don’t see them.

Pastor ARMSTRONG: The church has become the extended family, so a single mother can bring their child, her children to church and see deacons, see a pastor, see positive models of black manhood that challenge and offset the negative stereotypes they may see in and around their community.

SEVERSON: Churches have long been the most important institution in black communities, but Reverend Rivers says they have been largely silent on the decline of the black family.

Rev. RIVERS: If there are such phenomenally high levels of religious participation on the part of the black community, why hasn’t it filtered down? Well, I think there are a couple of factors. One is the black church has not successfully engaged the culture. Black preachers have their own sex problems. And the issue of sexual fidelity and what it takes to produce a culture of sexual fidelity has to begin in the church.

Pastor ARMSTRONG (During Sermon): But now, Lord bless the proclaimed word, that it may do what you have intended for it to do.

SEVERSON: At the Shiloh Baptist Church in Trenton, members about to be married, newlyweds, all couples are encouraged to attend marriage classes that are faith-based.

TAMARA GASKINS: God is key. We said it in our vows. Keeping God first, all things are possible. 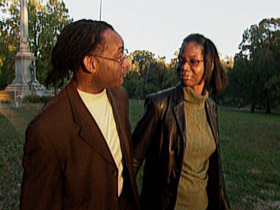 SEVERSON: Tamara and Tyrone Gaskins have been married three months. Tyrone was a foster child, did time at the New York Riker’s Island jail, but says it is possible to break out of the statistics and turn your life around.

TYRONE GASKINS: I think that the story doesn’t get told about the number of individuals in the African-American community who are able to take very challenging circumstances and turn their lives around.

SEVERSON: Pastor Smith’s Shiloh Church in Washington offers a mentoring program for at-risk boys. He agrees and disagrees with Reverend Rivers’s findings about the status of the black family.

Pastor SMITH: I don’t agree that it is crumbling. I do agree that the challenges are large and that it’s going to take, you know, an effort from all aspects of our community. And that, you know, churches are going to have to play a larger role.

SEVERSON: In the trenches, Jimmy and Derrick agree that religion is important.

Mr. PATRICK: Well, church and God is really important. Like, you know, I’ll write something in there, and I’ll put “God bless” at the bottom — little things like that. Sooner or later, they come around. Hopefully they will.

SEVERSON: At Pastor Armstrong’s church, another 10 couples graduate from marriage class. The pastor has a simple plan

Pastor ARMSTRONG (During Sermon): I want to invoke the power of God into the marriages, into the families, into the homes, into the churches so that God can straighten this stuff out.