LUCKY SEVERSON, guest host: One of the numerous ways that people in this country try to get fit these days is through the practice of yoga. There are many different forms of this discipline, but the most commonly taught is called Iyengar. It’s named for the Indian guru B.K.S. Iyengar, who teaches that yoga has a deeply spiritual component uniting the body, mind and soul. Kim Lawton reports:

KIM LAWTON: He's the man credited with bringing yoga to the West, and when Indian yoga master B.K.S. Iyengar makes a visit to America, he is greeted like the conquering hero his followers consider him to be. 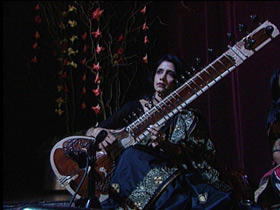 EDDY MARKS (Iyengar Archivist): They have benefited so much by his teachings, through his teachers, that when they see him they feel that love inside of their heart for the one who has given them so much.

LAWTON: Iyengar's impact on yoga is deep and wide. In 2004, TIME magazine included him in its list of the 100 most influential people in the world. His approach is taught more than any other in the U.S. Iyengar stresses the physical as a bridge to the spiritual. His senior teachers say that holistic message and Iyengar's personal charisma play a key role in yoga's popularity today.

PATRICIA WALDEN (Iyengar Yoga Teacher): He's filled with life and power, and the light that's around him sheds on us. He lights us up with his light.

MANOUSO MANOS (Iyengar Yoga Teacher): This is the guy that started the yoga ball rolling in the West. He hasn't been given credit properly. But the times that he's touched the West and inspired these people and the offshoots that have come out of him have taken this most remarkable subject and made it explode. 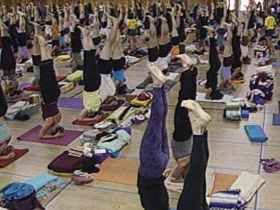 LAWTON: Yoga is big business. According to a Harris survey, more than 16 million Americans regularly practice yoga. And they spend almost $3 billion a year on yoga classes, products, and conferences.

Fifty years ago, yoga was little known in the U.S. Then Americans started hearing about a guru in India who could fold his body in amazing ways. He said the benefits were spiritual as well as physical.

B.K.S. IYENGAR (On Video): Yoga is a union of the body with the mind, mind with the soul.

LAWTON: The 87-year-old Iyengar was sick and frail as a child, but he says practicing yoga for 10 to 12 hours every day made him healthy and strong. He began demonstrating his experience and writing about it.

In 1966, Iyengar wrote the classic book LIGHT ON YOGA. He drew heavily on the writings of the ancient sage Patanjali, who some 2,000 years ago compiled a philosophy of yoga called the yoga sutras.

JOHN ABBOTT (CEO, YOGA JOURNAL): There's an intellectual aspect that runs through his teachings that I find have been extremely compelling and interesting to a whole segment of society, especially post-1960s, when people were looking so much towards the East for something new, something enlightening. 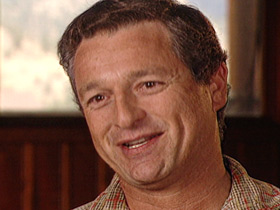 Mr. MARKS: What he did for yoga was revolutionize it by making the mysterious aspects of yoga understandable -- making them concrete, giving people concrete things to do with the physical body that started at the physical body but then gradually brought their consciousness inwards.

LAWTON: Iyengar inspires obvious devotion from his followers, who call him "Guruji," meaning the one who removes the darkness. On his recent visit to the U.S. to promote his new book, LIGHT ON LIFE, people revered him at every stop.

He has the reputation of being a demanding teacher who can give harsh corrections to his students.

JOAN WHITE (Iyengar Certification Committee): It's certainly a shock if you receive one of those slaps, but those slaps are very educational. And he doesn't do it with meanness. The man is truly a loving, compassionate person, and this is the way he shows his compassion.

LAWTON: Iyengar teaches that there are no divisions between the physical and the spiritual.

Mr. IYENGAR: Can a musician play the violin without the body? Then you say, "He played beautifully, it was spiritual." How can you say "spiritual" when he has used his body, holding the instrument? So we are also using the body as an instrument to tune the inner mind and the consciousness.

LAWTON: He emphasized the importance of proper body alignment when doing yoga poses, or asanas. For those unable to achieve the perfect position, he developed the use of props -- blocks, straps, and other supports. The right pose and controlled breathing, he says, lead to a place of internal stillness. 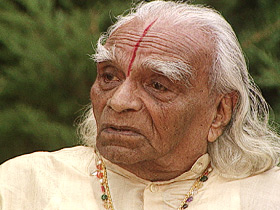 Mr. IYENGAR: The still state of mind -- one -- that is what yoga gives us.

LAWTON: For many yoga practitioners, this is a deeply spiritual experience.

JOHN SCHUMACHER (Iyengar Yoga Teacher): As one takes one's attention more and more deeply inside, that focus begins to leave behind the noise and stuff that keeps our brain so busy all day long. And then it becomes possible to enter a meditative state. As I go deeper into my practice, I feel myself enter that place of quietness and equanimity that feels spiritual to me in the sense that I'm in touch with an inner spirit.

Ms. WHITE: This is a discipline that says there is an infinite. We are part of the infinite. It doesn't limit us to who or what is that infinite. It says that we will find our own deity within as we mature in the practice. And for me, that was very attractive, and I have found that to be very true.

LAWTON: But they are quick to say that yoga is not a religion in and of itself.

LAWTON: Iyengar teaches that people of any faith can practice yoga as a way to enhance their own particular beliefs. But the influence of Hinduism is tangible and can be off-putting to some practitioners. This Iyengar intensive class sponsored by YOGA JOURNAL began with invocations to Patanjali chanted in Sanskrit, the sacred language of Hinduism. There were also prayers to Hindu deities. 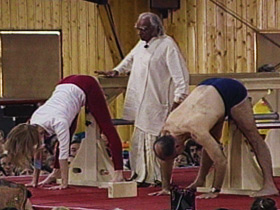 Mr. SCHUMACHER: He is a practicing Hindu, he's a Brahman, and that's his culture and that's his religion. He doesn't foist this on anyone else. Some of the rituals were devotional rituals, and one is free to participate in them until the level one is comfortable -- or not.

LAWTON: As yoga continues to grow in the U.S, practitioners are increasingly debating the extent to which the spiritual dimensions should be emphasized. Many are also concerned that yoga's trendiness, and the commercialism that now surround it, are diluting the practice.

Mr. ABBOTT: I think the greatest challenge is to continue the training and preparation of fully qualified teachers who can adapt yoga to our culture, make it accessible, make it attractive but grounded in the teachings of people like B.K.S Iyengar.

LAWTON: Iyengar himself believes the true essence of yoga will stand.

Mr. IYENGAR: And I'm sure that the light which has been lit 50 years ago in the field of yoga -- I don't think it is going to fade in America.

One of the numerous ways that people in this country try to get fit these days is through the practice of yoga. There are many different forms of this discipline, but the most commonly taught is called Iyengar. It’s named for the Indian guru B.K.S. Iyengar, who teaches that yoga has a deeply spiritual component uniting the body, mind and soul.

The Meaning of Yoga

None of the Above: Religious Implications
Tags: exercise, Hindu, Spirituality, wellness, yoga