Professor LEWIS BALDWIN (Professor of Religious Studies and Director of African American Studies, Vanderbilt University): Many labels were attached to him during his lifetime. He was called a civil rights activist; he was called a social activist, a social change agent, a world figure. But I think he thought of himself first and foremost as a preacher, as a Christian pastor.

LAWTON: Vanderbilt University religious studies professor Lewis Baldwin writes widely about King’s spirituality. He fears King’s pastoral side is being forgotten, and he says the nation should develop an appreciation for it.

Prof. BALDWIN: The pastoral role was central to everything, virtually everything, Dr. King achieved or sought to achieve in the church and in the society as a whole.

LAWTON: King was 25 and finishing his doctoral dissertation at Boston University when he was appointed to his first job as a local pastor at Dexter Avenue Baptist Church in Montgomery, Alabama. Baldwin says in many ways, King was simply carrying on the family business.

LAWTON: Dexter Avenue Baptist Church was founded in 1877 in a former slave traders’ pen just down the street. At the time, it was called the Second Colored Baptist Church. They bought this lot in 1879 and built the church a few years later. Martin Luther King Jr. was the 20th pastor here.

The church hired King in 1954. After a time of internal tensions, church leaders said they were looking for a noncontroversial pastor who could help restore morale. King arrived with a 34-point plan for the future. The Reverend Michael Thurman is the current pastor.

LAWTON (To Rev. Thurman): Has this changed much since the time of Reverend King? 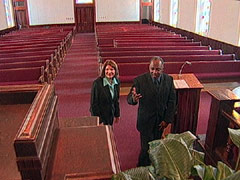 Reverend MICHAEL THURMAN (Pastor, Dexter Avenue King Memorial Baptist Church): Oh, the sanctuary is basically what it would have looked like during the time of Dr. King’s tenure here. The only thing that is different is that there would have been a row of ceiling fans in the ceiling.

LAWTON: The pews date back to the late 1880s, but the pulpit was King’s addition.

Rev. THURMAN: It was one of his 34-point recommendations that the congregation purchase new pulpit furniture. So this pulpit is actually the pulpit that he spoke from during his tenure here.

LAWTON: Seventy-six-year-old Mary Jo Smiley is an associate minister at Dexter Avenue. She was a young newlywed parishioner when King became her pastor.

LAWTON: She says he made a deep and immediate impact on the congregation.

(To Mrs. Smiley): What was it like sitting here, listening to his sermons?

Rev. SMILEY: I tell you what it was like to learn that he wasn’t going to preach some morning — it was devastating, because you sat there awed. You understood every word. And he didn’t — he used words maybe you hadn’t heard before, but somehow you knew what it meant and you felt a closeness to him as he spoke. And you felt as if he was speaking directly to you.

Prof. BALDWIN: He was able to connect with the spirituality of the people there in Montgomery, and I think that’s very, very important when you want to pastor people, if you want to lead people in a social movement.

LAWTON: Smiley says King sought to involve everyone in the congregation. She says she became a minister in large part because of his efforts to give women leadership roles.

LAWTON: As King was establishing his pastorate, racial tensions were rising in Montgomery. About a year after his arrival, Montgomery seamstress Rosa Parks was arrested for refusing to yield her seat on a bus to a white passenger. King began speaking out and leading peaceful protests. From the church, he helped ignite the Montgomery bus boycott. According to Baldwin, King saw this as a natural extension of pastoring his people. 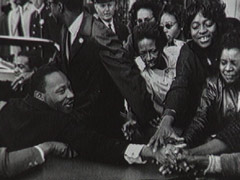 Prof. BALDWIN: Being a pastor for him was being a civil rights leader.

LAWTON: Thurman says it was King’s position at the church that enabled him to get so deeply involved with the civil rights struggle.

Rev. THURMAN: Because Dr. King was not directly tied to the white power structure of the city,- he had an independent source of income, meaning from his congregation. They freed him up to do the things that he did for the larger community.

LAWTON: But as King was pulled more and more into the national effort, he became concerned that he was neglecting his responsibilities at the church.

Prof. BALDWIN: He often did not have sufficient time to engage in counseling, to do funerals and weddings, to do the kind of administrative work that comes naturally with the pastoral role. 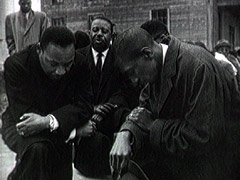 Rev. THURMAN: [In one of the letters that he wrote,] he really apologizes to the congregation because all of the other overwhelming activities and duties of a larger Montgomery bus boycott had just overwhelmed his schedule.

LAWTON: King resigned from Dexter Avenue in 1960 to devote more time to the civil rights cause. Even though he was now a leader at the national level, he wanted to maintain a pastoral role, so he became an associate pastor at his father’s Ebenezer Baptist Church in Atlanta.

LAWTON: Today King’s old church has officially changed its name to the Dexter Avenue King Memorial Baptist Church, and members are actively trying to preserve King’s legacy with tours and special educational programs. Smiley says she wants young people in particular to adopt a view of the world that she learned from the sermons of the man she called “ML.”

Rev. SMILEY: I never really hurt for the people in India, or stood aghast at the things I saw that were happening in Africa, or wondered or even cared about the friction and violence in Ireland. But after being around ML for some time, I began to open up my own self. I began to care about people.

LAWTON: Baldwin says pastors today can learn much from King.

Prof. BALDWIN: I think Dr. King always felt that a preacher and a pastor had to be relevant. That is, you must speak to the issues of your time, and you must be able to relate the gospel and the biblical revelation to the social issues and concerns of your time.

LAWTON: Baldwin says it’s a message needed now just as much as it was during King’s time. I’m Kim Lawton in Montgomery, Alabama.