BOB ABERNETHY, anchor: According to a survey by the Pew Forum on Religion and Public Life, solid majorities of all major American religious groups back stronger measures to protect the environment. Some conservative evangelicals are a little less likely than those in other groups to make environmental protection a priority. Nevertheless, as Lucky Severson reports, more and more evangelical leaders are speaking out about what they see as a biblical obligation to protect all of creation. 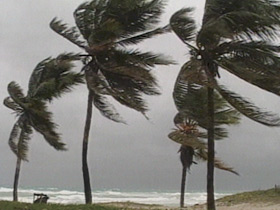 LUCKY SEVERSON: The fearsome destruction of hurricanes Katrina, Wilma, Rita, and 10 others in 2005 has sharpened the debate over global warming. The year 2005 was the most active and destructive hurricane year on record, but was it just an anomaly, or was it evidence of climate change? It’s a topic stirring in some unexpected places. The Reverend Richard Cizik, head of governmental affairs for the NAE, the National Association of Evangelicals, thinks it’s a debate that needs to be waged from the pulpit.

Reverend RICHARD CIZIK (Vice President for Governmental Affairs, National Association of Evangelicals): We, as evangelical Christians, have a responsibility to God, who owns this property we call earth. We don’t own it. We’re simply to be stewards of it. And if climate change is occurring, can we simply, with blinders on, pretend it isn’t happening?

SEVERSON: Reverend Cizik says he speaks only for himself, not for the NAE. But he is joined by a growing number of religious leaders.

SEVERSON: Reverend Fletcher Harper is with GreenFaith, a group that conducts environmental tours for members of 15 different congregations. The excursions are designed to educate about the spiritual nature of the environment, how man is abusing it and suffering the consequences.

Rev. HARPER: When I first began this work, I had a couple of clergy friends who came up to me and jokingly said, “Oh, now that you’re working for the environment, you must be a pagan.” And the first time someone said it, I laughed. And then the second time and the third time, I started realizing that there was something deeper that was getting said here, which is that there’s a general assumption that if you’re too close to the earth, you’re not Christian. 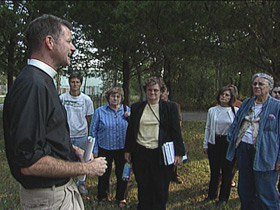 Rev. CIZIK: Environmentalism carries with it baggage — baggage that, oh well, it’s about big government, kooky religions, look, all the left-wing ideas that are known to mankind. This is the stereotype of environmentalism in this country. And evangelicals have said, “Oh no, we can’t do that. Not us.”

Professor JOHN GREEN (Director, Ray C. Bliss Institute of Applied Politics, University of Akron and Senior Fellow, Pew Forum on Religion and Public Life): Evangelical leaders and clergy have become quite interested in the environment in recent times. They connect that to a bunch of other issues, and they put it in distinctively evangelical terms. They talk a lot about “creation care” and being good stewards of the environment. Now if you go down to the people in the pews, you find a little bit different story.

SEVERSON: We visited Lynchburg, Virginia, home of Jerry Falwell Ministries and Liberty University, a city with a populace that is largely conservative and evangelical. We were invited to the Wednesday night service at the Hyland Heights Baptist Church. Everyone we spoke with shared the same skepticism about environmentalists as Mike Berry and Barry Clark.

MIKE BERRY (Congregant, Hyland Heights Baptist Church): This stereotypical environmentalist can be seen as maybe someone that’s not God-fearing.

BARRY CLARK (Congregant, Hyland Heights Baptist Church): If I see somebody out swimming with dolphins or chaining themselves to a tree, I’m going to question their mental status.

SEVERSON (To Mr. Clark): You’re going to go cut down the tree?

Mr. CLARK: I’m not going to cut down the tree while they are chained to it, but I am going to question, you know, why they, you know, feel that the tree is more important than human life. 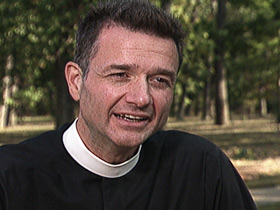 Rev. HARPER: That passage in Genesis was never meant to be interpreted as a dominion of exploitation, but rather a dominion similar to the dominion of God, which is one of loving kindness and compassion.

SEVERSON: Reverend Harper feels that many Protestants have become too focused only on the relationship between man and God, which he says can be short-sighted.

Rev. HARPER: Karl Barth wrote about the sole purpose of the natural world as being a stage for the truly meaningful drama between God and the human soul, so there’s a trajectory within Protestantism that reflects that human-divine emphasis to the exclusion of all else. And I think it’s a very unfortunate direction for theology to move in.

SEVERSON: The “end times” prophecies about the Second Coming of Christ are another factor that Reverend Cizik believes is holding some evangelicals back.

Rev. CIZIK: There is a certain “left behind” mentality that, look — there’s a certain amount of that — that “We don’t need to care for this,” or, “If after all, it’s all going to be incinerated, and Christ is going to come again … that’s good enough for me.” In other words, that kind of mentality.

SEVERSON: It’s a viewpoint we heard in a Lynchburg bookstore from Christine Schwartz.

CHRISTINE SCHWARTZ: Knowing what the Scripture teaches that Christ talks about he’s going to make a new heaven and a new earth. So in that sense I am not so concerned with this present world because I know it is going to be replaced with a better, greater one. At the same time, I don’t want to throw away what we have. 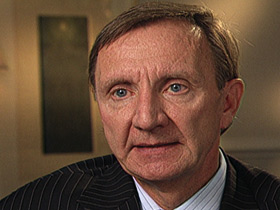 SEVERSON: Some evangelical leaders attended the UN’s climate conference in Montreal this past December, but many simply do not believe the science of global warming.

Rev. CIZIK: There is a suspicion by evangelicals, yes, about science generally. They’ve been slow to come around in a way that, say, those in the more theologically liberal community have not been suspicious about science.

SEVERSON: We found no one in Lynchburg who thinks that saving the environment is nearly as important as saving souls, and that includes Pastor Weiser at the Hyland Heights Baptist Church.

Pastor CARL WEISER (Hyland Heights Baptist Church): Sometimes I guess we think there are other things that are of more priority than global warming and environmental issues.

SEVERSON (To Pastor Weiser): Such as?

SEVERSON: On a scale from one to 10, Pastor Weiser says his congregation would probably rank the importance of the environment as a three or a four.

RICHARD TURNER (Congregant, Hyland Heights Baptist Church): I’ve not thought a lot about global warming. I think there’s other issues I’ve been concerned about. But if the pastor mentioned it in church, I might think about it and maybe see if there was something I could do to help.

Rev. HARPER: I think that what’s more important is that religious leaders need to take very strong, clear, consistent positions and bend and change public opinion around these concerns to the degree that they can.

EVANGELICAL ENVIRONMENTAL NETWORK TV SPOT (“What Would Jesus Drive?”): Too many of the cars, trucks, and SUVs that are made are polluting our air.

SEVERSON: One attempt to change public opinion about conservation was a nationwide campaign sponsored by the Evangelical Environmental Network called “What Would Jesus Drive?”

Reverend Cizik now owns two hybrid cars, one for himself and one for his wife. He says he grew concerned about global warming in the mid-1990s, when the majority of scientists reached the same conclusion — that it’s happening, and man can do something about it.

Rev. CIZIK: The evidence is sufficient enough to at least say, as evangelicals, “We’ve got to pay heed, take a look at it.” And for most scientists the argument is settled: climate change is occurring. It is real. It is human-induced. It has enormous consequences.

SEVERSON: On this particular environmental tour, Reverend Harper stops at waste sites that he says are usually found in poor, minority communities. He calls it an environmental injustice, and one he thinks churches should be fighting against. Harper uses religious teachings to preach against excessive consumption and biblical verses from Genesis and Revelations to underscore God’s concern with the environment. 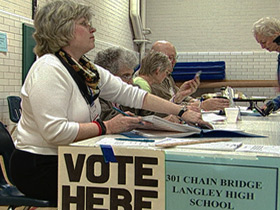 Rev. HARPER: The destruction of the earth, we are coming to understand, is a sin, just as it is sinful to mistreat other human beings — that we are morally accountable for our treatment of the earth.

SEVERSON: Four out of five evangelical Christians voted for George W. Bush, making up over 30 percent of his vote. Reverend Cizik is convinced that in coming elections, climate change will become an unavoidable issue, even with evangelicals.

CONGREGATION SINGING: Oh, magnify the Lord with me.

SEVERSON: An increasing number of pastors may be persuaded that environmental issues like global warming should become as important as social issues like abortion. But if Lynchburg, Virginia is any guide, it’s going to take some serious preaching to convince the folks sitting in the pews.