Rabbi ZALMAN GROSSBAUM (Chabad-Lubavitch, New Jersey): The matzah, because of its symbolism, is definitely the icon of Passover, and eating it is a biblical obligation. When we start the matzah bakery, we first introduce the kids to the story of Passover. 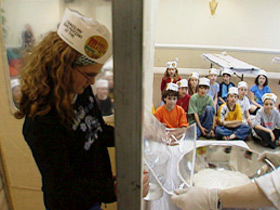 Then we start the actual baking process. First the children separate the kernels from the chaff.

(To Students): Extra care has to be made to make sure that it stays perfectly dry.

(To Classroom): Water. Some mayim. The most important job in a matzah bakery is the timer. From the moment that it mixes, we only have 18 minutes until it starts to rise. Any moment over the 18 minutes, not only is it not matzah, it’s actually what we would call “chametz,” chametz being leavened bread, which would be forbidden to eat on Passover.

(To Students): Matzah has to come out so flat; it has to be paper thin. 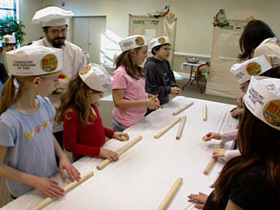 Then every child gets a little piece of dough. And, after kneading it a little bit, they roll it out and try to make a round matzah out of it. Then we make holes in the matzah. It’s very important. Before the matzah goes in the oven, it has to be perforated. That keeps the matzah flat.

But with a little singing from the kids, and their involvement, we can bake it in about 30 seconds. And out comes their finished product which they made, and they get so excited. They say, “Wow, this is my matzah.” When they get the chance to bake the matzah and to really experience what it might have been like to be a Jew going out of Egypt way back when, it makes it very meaningful to them.

On a spiritual sense, matzah symbolizes humility. It’s flat; it’s simple, basic ingredients. And that’s part of the theme of Passover, is to teach us the appreciation of life. And eating the matzah reminds us of where we’ve come from as slaves, as free people, and [of] our faith in God.