BOB ABERNETHY, anchor: Have you ever had the feeling that your doctor doesn’t have enough time for you, or, if you’re a doctor, that you are under so much pressure it’s hard to be compassionate with your patients? There is a physician in Northern California who thinks medicine is losing its soul, and she’s trying to rescue it. Rachel Remen is a best-selling author, a popular speaker, and herself a lifelong patient. Kim Lawton reports.

KIM LAWTON: Dr. Rachel Naomi Remen is leading a national campaign to rediscover the practice of medicine as a spiritual endeavor. 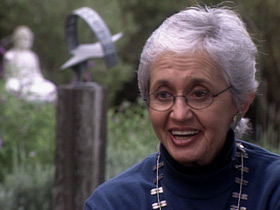 Dr. RACHEL NAOMI REMEN (Clinical Professor of Family and Community Medicine at the UCSF School of Medicine and Founder and Director, Institute for the Study of Health and Illness): Medicine for many, many people isn’t a job. It’s a way of life. And it’s a way of life that’s characterized by certain very traditional values — values like compassion and service and reverence for life. These are not the values of science. These are the values of what might be called a spiritual path.

LAWTON: That means helping other doctors transform how they view their profession.

Dr. REMEN (In Meeting): I was taught to cure people, and what that meant was that my relationship with my patients basically was a relationship between me as an expert and my patient as a problem.

LAWTON: Oncologist Jennifer Lucas says she’s become a better doctor by following Remen’s advice and ignoring something they both learned in med school: that in order to maintain professionalism, they should keep an objective distance from their patients.

Dr. JENNIFER LUCAS (Oncologist): There’s this big line that you are not supposed to cross. But people are really looking for ways to connect with you as their physician and to make you human.

LAWTON: Lucas tries to build relationships with her patients by bringing in values such as compassion and empathy — values, she says, that motivated her to become a doctor in the first place.

Dr. LUCAS: I’ve cried with a patient on many occasions. I will share my sadness if something is going on that is particularly difficult for everybody. It’s good for me, it’s good for the patient, it’s good for their families, and they have a sense that, you know, they are really being cared for.

ROSEMARY GUDELJ (Patient): I didn’t expect to have a doctor like her, because it was a serious illness, and she gave me so much reassurance and love from the very beginning. 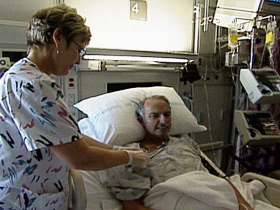 LAWTON: Dr. Remen believes the medical profession is suffering a severe spiritual crisis. She says the economic pressures of modern medicine, such as the growing influence of insurance companies and a focus on the bottom line, are all taking an overwhelming toll on physicians.

Dr. REMEN: If you are seeing 25 to 40 people a day, there’s very little you can do in the way of connecting to people. And these people are hurting. These are people who are frightened. They need so much more than a prescription. And they go by you in this unending line, you know, seven minutes at a time. It does something to someone to have to face that day after day.

LAWTON: What it does, she says, is generate cynicism and burnout.

Dr. REMEN: What happens is you begin to live below your own level of excellence. If you do that long enough, something begins to die in you, and that something is the soul of your profession.

LAWTON: As director of the Institute for the Study of Health and Illness, Remen encourages doctors to reclaim the soul of medicine. The institute sponsors a project called Finding Meaning in Medicine. Doctors from diverse religious traditions, including some with no religious affiliation, gather once a month in small groups to discuss a chosen theme.

Dr. REMEN: The topic is one of the basic values of medicine. It might be something like compassion, or it might be listening, or it might be grace. And the price of admission to this little meeting is that you bring a story from your professional work as a physician about the topic of the evening. 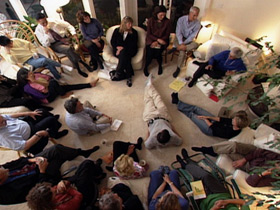 LAWTON: At this gathering in Dr. Remen’s Northern California home, the topic is relationship.

Dr. DAVID GULLION (Oncologist) (To Group of Doctors in Finding Meaning in Medicine): When you have a relationship, you share your love with patients. And what’s wonderful is how much they share with me.

LAWTON: Oncologist David Gullion says he joined Finding Meaning in Medicine in hopes of sustaining his passion for his emotionally draining work with cancer patients.

Dr. GULLION: In some patients, it seems like you give bad news after bad news, and [you have] to be able to do that without it really wrenching your own insides to the point that it becomes impossible.

LAWTON: He says the group gives him an opportunity to talk about things doctors don’t usually share, especially with other colleagues.

Dr. GULLION: It is a forum where you can really share your heart, share your soul, and know that it’s a safe sanctuary to do that.

LAWTON: Even beyond the world of medicine, Remen is a widely sought-after speaker and author who looks for the spiritual in everyday life. She encourages her audience to consider how they can be a blessing to others. 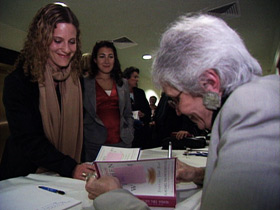 LAWTON: Her two best-selling books, KITCHEN TABLE WISDOM and MY GRANDFATHER’S BLESSINGS, are compilations of stories like the ones she urges doctors to share.

Dr. REMEN: A story is a container for meaning and value. That’s why parables are so powerful in all the world’s religions.

LAWTON: Remen doesn’t like to talk a lot about her personal spirituality, but she acknowledges diverse religious influences, including Saint Luke the Physician and her grandfather, an Orthodox rabbi. Her home is decorated with Buddhas.

Dr. REMEN: These are all reminders to stay awake and pay attention, because the mystery that’s at the heart of life can speak to you at any time, anywhere.

LAWTON: Much of her thinking about health, spirituality, and life was shaped by her own illness. 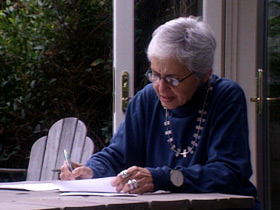 Dr. REMEN: I have Crohn’s disease and I’ve had it for 52 years. I have had eight major surgeries. I am a chronically ill person. I haven’t been a well person in more than half a century.

LAWTON: Doctors told her she would be an invalid who would most likely die by the age of 40. Instead, she says, her illness gave her internal strength and helped her look at the world differently.

Dr. REMEN: I no longer ran from other people in trouble. I actually became stronger as a person, much more loving, much wiser as a person, and in the end my body has never healed from this disease. But I truly believe that I am much more a person because of it.

LAWTON: She says it’s the difference between curing and healing.

Dr. REMEN: You know, we can’t cure everything. Life can’t be fixed, and science is limited. But the ability of people to grow beyond their limitations, to become more than who they are, is really not that limited.

LAWTON: She believes that message can help heal the practice of medicine itself. I’m Kim Lawton in Northern California.

THE NATURE OF SUFFERING AND THE GOALS OF MEDICINE by Eric J. Cassell HEALING AND THE MIND by Bill Moyers CONSCIOUSNESS AND HEALING: INTEGRAL APPROACHES TO MIND-BODY MEDICINE by Marilyn Schlitz et al. ROOTS OF HEALING: THE NEW MEDICINE by Andrew Weil et al. Books by Rachel Remen: MY GRANDFATHER'S BLESSINGS: STORIES OF STRENGTH, REFUGE AND BELONGING KITCHEN TABLE WISDOM: STORIES THAT HEAL THE WILL TO LIVE AND OTHER MYSTERIES MYSTERY: THE WISDOM OF THE SOUL WOUNDED HEALERS FINAL WISDOM: WHAT THE DYING CAN TEACH US ABOUT LIVING THE HUMAN PATIENT THE MASCULINE PRINCIPLE, THE FEMININE PRINCIPLE AND HUMANISTIC MEDICINE