LUCKY SEVERSON, guest anchor: For years, the Reverend Martin Luther King Jr.’s personal papers have been sitting in storage at Sotheby’s auction house while his family, civil rights leaders and historians argued about what to do with them. Last week, a coalition of business and civic leaders in Atlanta worked out a $32 million deal to buy the collection and ultimately transfer it to King’s alma mater, Morehouse College. Morehouse is promising wide public access to the papers. But several prominent historians are worried, because the King family is retaining copyright control and in the past has allowed only limited use. Before the sale, Sotheby’s gave Kim Lawton a private glimpse of the collection.

KIM LAWTON: Many of the more than 7,000 items in the collection reveal the development of the Reverend Martin Luther King Jr.’s religious views and how those views shaped his civil rights work. Sotheby’s curator Elizabeth Muller showed me King’s earliest theological writing. 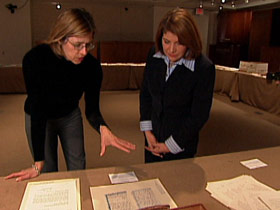 ELIZABETH MULLER (Curator, Sotheby’s Auction House): What we’re looking at are Dr. King’s blue book examinations for a Bible class that he took at Morehouse College in 1946 and 1947, and it was because of this class that he decided to become a minister. He worked very hard on the course, as you can see, and he well deserved these “A”s.

LAWTON: But King didn’t fare as well in his public speaking class in seminary.

Ms. MULLER: As we can see, in his third term, for public speaking he got a “C.” So I think his professor was probably a very poor judge of his character and his abilities.

LAWTON: Numerous pieces are in King’s own hand – notes where he started sermons on the backs of church bulletins or any scrap of paper he could find. There are also multiple drafts of some of his most famous speeches, including his I Have a Dream speech. Another interesting find – King’s sermon boxes, where he filed all his sermons and kept an alphabetized index of quotes and ideas.

Ms. MULLER: Here we are looking at examples of all of those index cards which have quotations from various authors as well as quotations from the Bible, and these would be various ideas that he would incorporate into his sermons. 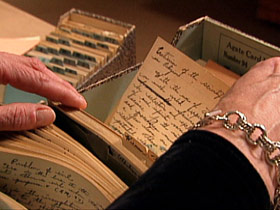 LAWTON: And they’re all in alphabetical order?

LAWTON: So he’s giving a talk or sermon on evil, and he goes to E?

LAWTON: And he can pick through different quotations or ideas?

Ms. MULLER: Various different examples for that, exactly. And he would use more than one for every sermon. There would at least be a dozen or so.

LAWTON: There are more than 1,000 books, many with copious notes in the margins, such as this one by theologian Reinhold Niebuhr.

Ms. MULLER: And what we can see on the inside, just on the fly leaves here, is that he’s already started a sermon, an outline for a sermon which became one of his most famous sermons.

LAWTON: And these notes were based on things he was reading inside the book?

Ms. MULLER: Inside the book, yeah. He’d carry on an intellectual dialogue with the authors he was reading at the time.

LAWTON: Perhaps the most poignant item is the attaché case King had with him when he traveled to Memphis, where he was assassinated in 1968. Among the contents, a devotional book by one of his favorite authors, Harry Emerson Fosdick, and the outline of a sermon he was writing. King had already titled it – “Interruptions.”

Scholars say full access to this collection is vital so that King’s legacy can be preserved and expanded.