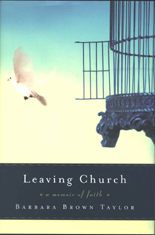 Many years ago now, when I was invited to speak at a church gathering, my host said, “Tell us what is saving your life now.” It was such a good question that I have made a practice of asking others to answer it even as I continue to answer it myself. Salvation is so much more than many of its proponents would have us believe. In the Bible, human beings experience God’s salvation when peace ends war, when food follows famine, when health supplants sickness and freedom trumps oppression. Salvation is a word for the divine spaciousness that comes to human beings in all the tight places where their lives are at risk, regardless of how they got there or whether they know God’s name. Sometimes it comes as an extended human hand and sometimes as a bolt from the blue, but either way it opens a door in what looked for all the world like a wall. This is the way of life, and God alone knows how it works.

Although we might use different words to describe it, most of us know what is killing us. For some it is the deadly rush of our lives; for others it is the inability to move. For some it is the prison of our possessions; for others the crushing poverty that dooms our children to more of the same. Few of us can choose our circumstances, but we can choose how we respond to them. To be saved is not only to recognize an alternative to the deadliness pressing down upon us but also to be able to act upon it. Even those who have no choice but to be carried toward safety on stretchers will eventually be given the chance to take up their mats and walk, and even those whose legs still will not work can discover how agile a healed spirit can be.

On the twentieth anniversary of my ordination, I would have to say that at least one of the things that almost killed me was becoming a professional holy person. I am not sure that the deadliness was in the job as much as it was in the way I did it, but I now have higher regard than ever for clergy who are able to wear their mantles without mistaking the fabric for their own skin. As many years as I wanted to wear a clerical collar and as hard as I worked to get one, taking it off turned out to be as necessary for my salvation as putting it on. Being set apart was the only way I could learn how much I longed to be with everyone else. Being in charge was the only way I could learn how much I wanted to be in community…Observing the Sabbath is saving my life now. For the first time in my life, I can rest without leaving home. With sundown on the Sabbath, I stop seeing the dust balls, the bills, and the laundry. They are still there, but they lose their power over me. One day each week I live as if all my work were done. I live as if the kingdom has come, and when I do the kingdom comes, for one day at least. Now, when I know the Sabbath is near, I can feel the anticipation bubbling up inside of me. Sabbath is no longer a good idea or even a spiritual discipline for me. It is my regular date with the Divine Presence that enlivens both body and soul.

Encountering God in other people is saving my life now. I do not look for angels anymore, although I have nothing against them. The clerk at the grocery store is messenger enough for me, at least if I give her a fraction of the attention that I lavish on my interior monologue. To emerge from my self-preoccupation long enough to acknowledge her human presence is no mean feat, but when I do I can almost always discover what she has to teach me – and not only she, but every person who crosses my path. While it is generally more pleasant for me to encounter people who support my view of reality, I am finding that people who see things otherwise tend to do me a lot more good.

Like quantum physicists, they remind me that reality is more relational than absolute. Every time I am pretty sure that I have some absolute truth all worked out, a human being comes along to pose an exception to my rule. Over and over, the human exceptions prove to be more revelatory than the rules.

Committing myself to the task of becoming fully human is saving my life now. This is not the same as the job of being human, which came with my birth certificate. To become fully human is something extra, a conscious choice that not everyone makes. Based on my limited wisdom and experience, there is more than one way to do this. If I were a Buddhist, I might do it by taking the bodhisattva vow, and if I were a Jew, I might do it by following Torah. Because I am a Christian, I do it by imitating Christ, although I will be the first to admit that I want to stop about a day short of following him all the way.

In Luke’s gospel, there comes a point when he turns around and says to the large crowd of those trailing after him, “Whoever comes to me and does not hate father and mother, wife and children, brothers and sisters, yes, and even life itself, cannot be my disciple” (14:26). Make of that what you will, but I think it was his way of telling them to go home. He did not need people to go to Jerusalem to die with him. He needed people to go back where they came from and live the kinds of lives that he had risked his own life to show them: lives of resisting the powers of death, of standing up for the little and the least, of turning cheeks and washing feet, of praying for enemies and loving the unlovable. That would be plenty hard enough for most of them.

If he could not shake the crowd off, they were all going to get themselves killed, or worse. They were going to venerate his path in place of finding their own. They were going to expect him to tell them things that they could only discover for themselves. So he turned around and said something guaranteed to discourage most of them from going any further. He stopped the car so the spiritual hitchhikers could get out. Like me, a lot of them decided that they did not have what it took to be disciples after all. Drifting away in clumps of two and three, they eventually found their ways back home, where they started local chapters of the Friends of the Disciples, and to everyone’s great surprise that turned out to be enough. All these years later, there are still a few who believe that becoming fully human is the highest honor they can pay to the incarnate one who showed them how.

Add this, then, to the list of things on the kitchen table that I have decided I will keep: I will keep faith — in God, in God’s faith in me, and in all the companions whom God has given me to help see the world as God sees it — so that together we may find a way to realize the divine vision. If some of us do not yet know who we are going to be tomorrow, then it is enough for us to give thanks for today while we treat each other as well as we know how. “Be kind,” wrote Philo of Alexandria, “for everyone you meet is fighting a great battle.” We may be in for a long wait before the Holy Spirit shows us a new way to be the church together, but in the meantime there is nothing to prevent us from enjoying the breeze of those bright wings.