BOB ABERNETHY, anchor: Now, Barbara Brown Taylor — Episcopal priest, teacher, columnist and author. For years, her books – 11 so far – reflected her perspective as a church member and leader. Her new book is called LEAVING CHURCH. It’s about burning out as the priest of a parish she had wanted very much to serve, and then leaving not only the pastoral ministry but many of her former beliefs, too.

Barbara Taylor and her husband moved to the hills of northeast Georgia nine years ago when she was called to be pastor of Grace-Calvary Episcopal Church in Clarksville, Georgia. She’s written that she wanted to spend the rest of her life as close to God as she could get, and she thought being a parish priest would make that possible. 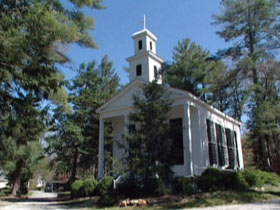 The Reverend BARBARA BROWN TAYLOR: I wanted to be as close as I could to the Really Real. And I’ll capitalize both of those “R’s” because God is a word that means different things to different people, but we might all agree it’s what is most real.

ABERNETHY: Taylor was and is such an insightful and eloquent preacher that Baylor University named her one of the best in the English-speaking world. At Grace-Calvary she was also a workaholic.

The Rev. TAYLOR: Part of what happened was the church and I succeeded. Part of what happened is that the church grew, and I gained a reputation for preaching. And people came and it was a wonderful community, but we had a building that seated 82 people. And with a congregation approaching 400, we were up to four services on Sunday, and everyone was tired. In my wish to do well for that congregation I wasn’t doing particularly well for myself or my friends or my family. And I even found that the work for God was taking me away from God. There was no time anymore to be quiet or still or pray.

ABERNETHY: And then something happened, and you became miserable?

The Rev. TAYLOR: It was a stinging in my eyes after church on Sunday that I thought was an allergy, until one day I sat in the car and decided to just let my eyes tear up so that whatever was in them would come out. And what came out were tears that wouldn’t stop.

ABERNETHY: Meanwhile, her understandings were changing of what faith is and of what she believed.

The Rev. TAYLOR: Beliefs have become unimportant to me. Faith as radical trust became even more important to me during this time, because so many of my certainties about who I was and what I was supposed to be doing fell away that faith was really what I had left. 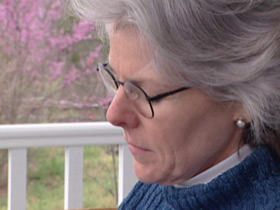 ABERNETHY: There was also the strain of what Taylor calls the toxic effects on a priest of being seen as the holiest person in the room.

The Rev. TAYLOR: I did set out to be holy and to be perfect exemplar and to fulfill all of my vows, baptismal and ordained, and we speak of ordination in the Episcopal Church as being set apart. It’s part of the job. But I didn’t want to be set apart anymore.

ABERNETHY: One day a call came from nearby Piedmont College asking if Taylor might like to come teach world religions. She quickly said yes and resigned from Grace-Calvary. Now, as she told an audience at Washington’s National Cathedral recently, she loves her new ministry.

The Rev. TAYLOR (to audience at Washington’s National Cathedral): The teaching was and is wonderful. I get to work with 19- and 20-year-olds who are not only my emotional peers but also a group I saw very little of in church. I get to ask the questions instead of providing the answers, which is a great freedom and relief. I also get to give grades, which clergy only do in their secret fantasies: “I’m sorry, Mr. Smith, but your efforts have been so minimal that I’m afraid you’ve flunked Lent.”

ABERNETHY: Taylor was asked whether doubt played a role in her leaving church.

The Rev. TAYLOR (to audience at Washington’s National Cathedral): Doubt? Oh sure, sure. Here’s the way I presently live with doubt. Doubt often brings me to poke at what I believe, and when it topples, I realize that was an idol. And so doubt and disillusionment have been the divine gifts that have led me deeper into who God is. 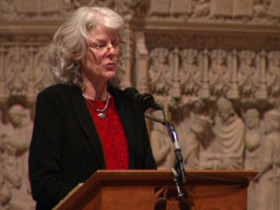 The Rev. TAYLOR: At the very least it would mean something about every day, to the best of my ability, resisting being a fake. Resisting the fake answer, the false front, the superficial conversation in favor of something more deeply human, more deeply connected to what really matters about being alive, whether it sounds religious or spiritual or correct or not. It means worrying less about being perfect and being concerned more with being authentic or real with other people. Much of the religion I was schooled in was about putting myself away, aside, behind me in order to become something holier and closer to God. In other words, to draw nearer to the Really Real I needed to be less me. Perhaps it was a mid-life revelation or just wearing out on that that led me to a different understanding that my humanity was God’s chief gift to me and that if I was going to find the Really Real it was going to be within that and not separating myself from that. It meant that the holiest thing I could be was the flawed human being God had made me to be.

ABERNETHY: Taylor’s previous book, THE LUMINOUS WEB, was an attempt to understand scientific theories of the universe. She said science has taught her that truths change.

The Rev. TAYLOR: That’s what I meant earlier about faith as trust. It’s not certainty that I’ve got a hold of something that won’t move. It’s a willingness to keep walking into the next day, open to whatever may turn out to be true that day.

ABERNETHY: So, does being close to nature, which Taylor loves, and accepting changing truths and trying to be fully human mean that this former church leader has become less of a Christian?

ABERNETHY: Barbara Taylor may no longer be a parish priest, but she says she is a guest preacher at some church, somewhere, three out of four Sundays.