KIM LAWTON: Reverend Gardner C. Taylor gets a celebrity’s welcome when he takes the pulpit in churches across the nation, and at 88, he still shows the charm that has pulled in worshipers for more than six decades.

Reverend GARDNER C. TAYLOR (Preaching): It’s been a year, and I must say you don’t look a day older. Of course, I don’t see as well as I used to!

LAWTON: During his long career, Taylor has been repeatedly honored as one of the greatest preachers in America. President Bill Clinton agreed and gave him the Medal of Freedom in 2000. 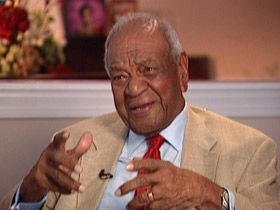 Rev. TAYLOR (Preaching): They marched on…

LAWTON: And Taylor is still at it, a frequent guest preacher all over the country, even though he is technically retired. He says preaching is always a tenuous endeavor.

Rev. TAYLOR: It is quickly lost. It’s uttered, heard, and sometimes lost. But it is the mystery of preaching that it survives, and that it has survived so much of our bad preaching.

Dr. RICHARD LISCHER (Professor of Preaching, Duke University Divinity School): He almost singlehandedly has elevated and made visible great preaching. He is one of the first whose influence crossed over into the realm of white homiletics and white preaching.

LAWTON: Taylor was born in Baton Rouge, Louisiana, in 1918.

(To Rev. Taylor) (Looking at Photos): Was this you?

Rev. TAYLOR: Yeah. I like that serious look on my face.

LAWTON (To Rev. Taylor): I know. You were very intent on being a cowboy, I think.

Early on, Taylor says, he didn’t want to follow in his minister father’s footsteps. 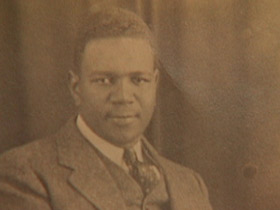 LAWTON: Taylor ended up at Oberlin College’s School of Theology in Ohio, where he discovered he had his father’s gift of speaking.

Rev. TAYLOR: Both of my grandparents were slaves, and neither could read or write. But somehow he had this feeling for the melody of the English language, and I inherited it.

LAWTON: In 1948, Taylor and his wife, Laura, moved to Concord Baptist Church in Brooklyn, where he spent the next 42 years, until his retirement in 1990. His eloquence and intelligence led to national prominence.

Rev. TAYLOR (Preaching): And on Sunday morning, he came forth declaring, “All power is in my hands.” My friend, that is the destiny of history.

Dr. LISCHER: He manages to keep an enormous range of rhetorical skill under tight, disciplined control, so that when you’re listening to a Gardner Taylor sermon, you feel like something is about to break out or explode.

Rev. TAYLOR (Preaching): John talks about the song of the Lamb: “I saw a new Heaven.”

LAWTON: During the civil rights era, Taylor played a key role raising money in the North to support the Southern church’s efforts. Together with Martin Luther King Jr., he pushed the black Baptist establishment to get more involved in the movement. When that didn’t happen, the two helped found a new denomination, the Progressive National Baptist Convention.

Taylor and King were close friends, often vacationing together. But Taylor says King never really talked about his personal struggles.

Rev. TAYLOR: I did not realize — I should have, I’ve felt guilty about that — I did not realize the pressures this man was under. He was not universally supported by blacks. There were threats on his life constantly. He lived under that shadow day by day, and as I look back upon his years I wonder how he managed.

Dr. LISCHER: Gardner C. Taylor was King’s role model of how one employs the Scripture in order to use its great themes to preach the gospel of freedom for all humanity. 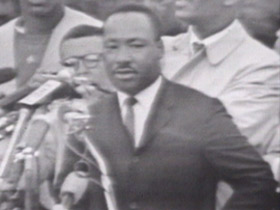 Rev. TAYLOR (Preaching): And so a people marched out singing, “Free at last, free at last! Thank God Almighty, we are free at last!”

LAWTON: Taylor remained involved in social issues. Looking back, he admits at times he may have been too involved with Democratic Party politics. But he also worries that many contemporary churches have lost their prophetic edge, focusing more on personal prosperity than on issues like poverty and injustice.

Rev. TAYLOR: I think the church today in America partakes of the contemporary American disease of “Let me alone! I want to get along, and I don’t want to be bothered with too many things.” And I think that’s in the churches. When a pulpit becomes an echo of the pew, it loses, I think, almost all of its reasons for existence.

Rev. TAYLOR (Preaching): You will discover, if you live long enough, that almost all those people around you disappear one by one.

LAWTON: Taylor says as he’s aged, his preaching has begun to reflect more about the frailty of human life. That was tragically brought home in 1995, when Laura, his wife of 55 years, died after being hit by a truck. He has since remarried and moved to Raleigh, North Carolina, where he can often be found playing golf.

Rev. TAYLOR (Practicing Golf): I wish I could do that on the golf course!

LAWTON: This spring, Taylor taught a preaching class at nearby Shaw University.

LAWTON: As part of the course, he critiqued students’ sermons.

UNIDENTIFIED STUDENT #2 (Preaching): But my mama used to tell [me] that everything that feels good to you is not good for you. 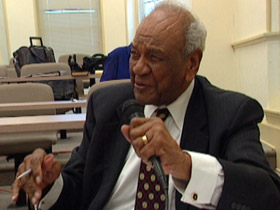 LAWTON: And he didn’t hold back with his comments.

Rev. TAYLOR (To Student): I think you’ve got talent, but I think you want discipline. You just — you wear people out. You don’t want to do that. You want to carry them with you.

Rev. TAYLOR (To Class): You do not want to strive to be known as a great preacher. You do want to strive for people to feel, when you have tried to preach, what a great gospel it is.

Rev. TAYLOR: This is not praying, it is not reading, it is just opening oneself. It’s a mystic kind of thing. But we do so little of it, and we who preach are likely to engage ourselves in so many things and to neglect that aspect of being open to what God has to say. And I wish to heaven I had practiced this more early on in my ministry.

LAWTON: He says the older he gets, the more he relies on God’s promises of eternal life.

Rev. TAYLOR: I’m 88, and I lean much more upon the promises, because I need them much. I guess I always needed them, I shouldn’t say that. But I feel the need of them more.

LAWTON: Which of those promises are the ones you’re leaning on?

Rev. TAYLOR: That He will see about me, and I do not know what, but that I will be in a better condition than I am now, and I think that’s at the heart of the Christian gospel.

(Preaching): Sickness and sorrow, and pain and death, are felt and feared. God shall wipe away all, all, all, all tears!