KIM LAWTON, guest anchor: There’s been a long-standing debate about the appropriate lines between religion and politicking. As Lucky Severson reports, it’s a question that has pitted clergy against clergy in the key battleground state of Ohio.

LUCKY SEVERSON: This is Pastor Russell Johnson, a man with strong views on just about everything.

SEVERSON: Over the past 20 years, Pastor Johnson has transformed the tiny Fairfield Christian congregation into a megachurch bigger than a Wal-Mart superstore in the cornfields outside Columbus, Ohio. 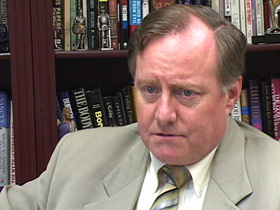 Rev. JOHNSON: We’re a nondenominational church. Someone said, “Are you Protestant?” I said we’re not protesting anything.

Rev. JOHNSON: I sense that God put us here to make a difference.

SEVERSON: His friends and foes say Pastor Johnson has made a difference in the political landscape.

(To Rev. Johnson): Do you think that you helped swing the 2004 election for President Bush?

Rev. JOHNSON: I think people like us played a key role in Ohio turning a page in history.

SEVERSON: To many here in Ohio, Pastor Johnson is someone who played an important role in the close victory of President Bush in 2004. Among Christian conservatives, he is a hero. To others, he’s taken the pulpit too far. In a highly unusual move, over 60 members of the clergy of a variety of Christian and Jewish denominations filed a complaint with the IRS accusing Johnson and another pastor of improperly using their churches in political activities. 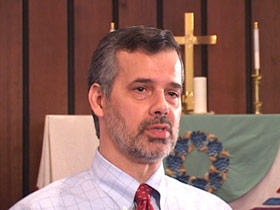 The pastor here at the North Congregational United Church of Christ in Columbus is Eric Williams. He’s one of the clergy who signed the complaints against Pastor Johnson and says his congregation stands behind him.

Reverend ERIC WILLIAMS (Senior Pastor, North Congregational United Church of Christ, Columbus, OH): This whole endeavor engaging the IRS in letters of complaint is focusing on the process. Should churches be involved to the level they are in governmental affairs and political affairs? Obviously my position is that it should not. It’s crossed that line.

SEVERSON: The complaints contend that Johnson and another megachurch pastor, Rod Parsley, crossed that line by actively supporting the campaign of social conservative Ken Blackwell, who is the Ohio secretary of state running for governor.

MARCUS OWENS (Attorney, Caplin & Drysdale Law Firm): The tax law that applies to churches and indeed all charities in the United States is that they cannot engage in political campaign intervention. 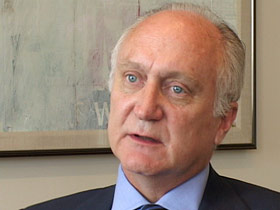 SEVERSON: Marcus Owens was with the IRS for 25 years, most recently in charge of the Exempt Organizations Division. Now he’s a lawyer in private practice representing the Ohio clergy filing the complaint.

SEVERSON: Pastor Johnson is accused of inviting candidate Blackwell to church events, praising his stand against gay marriage and abortion, and not inviting his opponent, a minister and Democrat, Ted Strickland.

Mr. OWENS: Reverend Johnson at Fairfield Christian used his e-mail system at the behest of the Blackwell campaign to disseminate a political message, which is there couldn’t be anything clearer in terms of a violation of the Internal Revenue Code.

SEVERSON: Reverend Johnson admits using his 100,000-person e-mail list to send out a message praising Blackwell that was linked to the candidate’s Web site. But he denies his intent was to influence the vote. He says the clergy accusing him are collaborating with secularists. 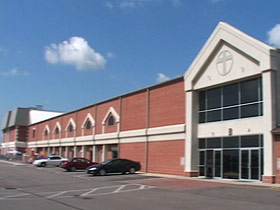 Rev. WILLIAMS: I’m a faithful citizen of the church, of our community, and I seek to exercise the role I play — the historic role I play — as a religious leader in a way that honors the separation of church and government.

SEVERSON: The IRS says there has been an increase in the number of charities and churches engaging in politics and that it has investigated more than 200 organizations since 2004. Fifty-nine received warning letters. Some were ordered to pay fines. And not all complaints have been against the Christian Right. Liberal churches and charities have also been accused of pushing politics too far.

PHIL BURRESS (President, Citizens for Community Values): There’s more and more churches that are saying, “You know, if the IRS is going to be used to silence us, then we will not be silenced.” And I’m speaking pretty much universally with the pastors that I know.

SEVERSON: Phil Burress is president of Citizens for Community Values, an organization he says is affiliated with over 17,000 Ohio churches. Burress says the Religious Left and black churches have been using the pulpit for years.

Mr. BURRESS: I mean, Al Gore came in and got in the pulpits of some of the African-American churches which happened to be leaning hard left. There’s a history of Jesse Jackson, who is a pastor. 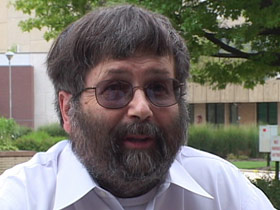 SEVERSON: John Green is a scholar on religion and politics and the director of the Bliss Institute at the University of Akron.

Professor JOHN GREEN (Director, Ray C. Bliss Institute of Applied Politics, University of Akron): Well, considering, Christians have a really good point when they talk about the involvement of religious people in politics. I mean, that’s been the case since the time of the American Revolution, through the Civil War, the civil rights movement, and down to today. So they’re right about that.

SEVERSON: At the Fairfield Christian Church, members say they count on their pastors for political advice. This is Lee Bugbee.

LEE BUGBEE (Congregation Member, Fairfield Christian Church): A lot of people are naive about politics and who’s going into elected offices and everything else. And I think it’s the responsibility of our leaders in the church to communicate to us about what’s going on.

SEVERSON: Until 1954, when Congress put restrictions on preaching from the pulpit, clergy could — and often did — endorse their favorite candidates. And that’s the way many in the Christian Right think it ought to be today.

Mr. BURRESS: You know, the founding fathers wrote in the First Amendment, “We shall have freedom of religion” — not freedom from religion. 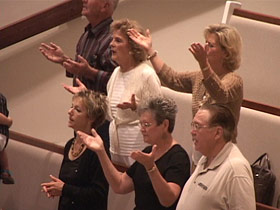 Prof. GREEN: There are two clauses that refer to the relationship between the government and churches. And one of them is what’s called the Establishment Clause, which prohibits a formal relationship and official state church. But there’s a second clause which protects and guarantees the free exercise of religion. And we’ve always had a bit of a problem of how one squares in reality the Establishment Clause and the Free Exercise Clause.

Rev. WILLIAMS: You know, it’s ironic that who were the earliest religious leaders to seek separation from church and state? It was evangelicals. And today it’s the evangelicals who want to abridge that.

SEVERSON: Like most megachurches, Fairfield Christian is more than a church. It also serves as a private school for almost 800 kids.

Rev. JOHNSON: If you give kids today cynicism and skepticism and secularism and they have no place to stand about right and wrong, they may very well not have a sense of resolve to fight evil.

SEVERSON: To help in that fight, the pastor has recruited hundreds of what he calls “patriot pastors” to mobilize the faithful, register voters, and elect officials who will fight cultural evils.

Rev. JOHNSON: Watch what’s happened to the people who have said, “Keep Christianity behind stained-glass windows.” Kids can’t pray in school. Kids can’t read their Bibles like they used to; can’t say a prayer or sing “Silent Night” at Christmas or hear about facts that support intelligent design.

SEVERSON: Pastor Johnson says it’s time the Religious Right gets a voice in this country.

Rev. WILLIAMS: I would say at least since the ’80s, they have been the dominant voice. They have to quit pretending to be the victim here. 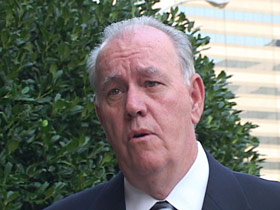 SEVERSON: In Phil Burress’s view, churches of all faiths are victims of the law that restricts political preaching. He thinks it should be revoked or amended.

Mr. BURRESS: I believe with all my heart that the true leaders of this country are the pastors who are in the pulpits. When you look at our history, it was the pastors that made this country what it is today. It wasn’t our elected officials. They mess things up.

Rev. WILLIAMS: You know, they still look at the United States as one of the most religious and religiously diverse countries in the world. And I think we have that because of the separation of church and state. I think that guards our religious liberty. I think it would be a tragic trade-off so the bigger churches would have the bigger influence and eventually would erode our religious freedoms. I think down the road the costs would be enormously high.

Prof. GREEN: You know, religion can be a very useful and powerful force for good in politics. But as we know from just looking around the world and even in our own history, it can be a very destructive process as well. And so my own particular view is that religious people should engage in politics with great caution.

SEVERSON: The IRS won’t confirm whether it is in fact investigating the complaints against Pastor Johnson. Nor will he. Meanwhile, he says he will continue to sign up patriot pastors and register new voters for the upcoming elections.