BOB ABERNETHY, anchor: This coming week marks the one-year anniversary of Hurricane Katrina, and the devastation and despair it unleashed.

President Bush has designated August 29 as a National Day of Remembrance to honor those who died, those who lost their homes and livelihoods, and those who gave so much to help. Special prayer services and memorials have already begun across the Gulf Coast and around the nation. Meanwhile, recovery and rebuilding have been painfully slow. In New Orleans, officials estimate the population is only about 45 percent of what it was before Katrina. Many survivors still face overwhelming needs, and faith-based groups continue to play a central role in trying to meet them. 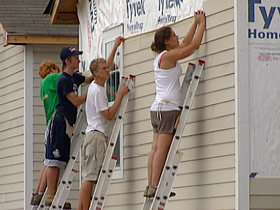 Kim Lawton and producer Gail Fendley have traveled often to the Gulf region over the last 12 months to report about Katrina’s impact on the religious community and the massive but little-covered outpouring of faith-based assistance. Here is Kim’s update.

KIM LAWTON : In the blistering summer heat of New Orleans, Southern Baptist volunteers are finishing new Habitat for Humanity houses. It’s a welcome, but all too rare, sign of hope in the city’s devastated Ninth Ward.

Just a few miles away, United Methodist volunteers are dragging out moldy carpet that has rotted inside a church sanctuary for nearly a year.

CHERYL WALKER (United Methodist Volunteer): I guess I wasn’t aware that the devastation was still as bad as it was almost a year later. I thought more work had been done because of all the money you hear that has been pumped in. 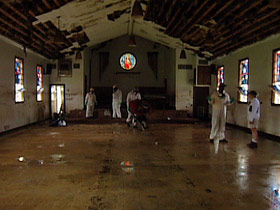 ANGELE GIVENS (Community Activist): This was our dream house. And when we bought it we said we were going to live here for the rest of our lives. So, there goes your plans.

LAWTON : Community activists Joe and Angele Givens are caught in the uncertainty of many here, wondering if the levees will hold this hurricane season. They are waiting for their house to be demolished, but they haven’t decided whether to rebuild.

Ms. GIVENS : You spend all your time fighting with FEMA and the SBA and the mortgage company and the insurance company, and it’s exhausting. It’s a hard place to live. I mean, I wake up some mornings and say, “Why do we still live here?” And the only reason we do still live here is because at this point we don’t want New Orleans to come back without our help.

LAWTON : Twelve months after Katrina, recovery and rebuilding across the Gulf Coast have been severely hampered by political wrangling, bureaucracy, and the sheer magnitude of the task. Vast areas still look like ghost towns, overgrown with brush. In the midst of it all, religious groups have been playing a key — and often overlooked — role in the struggle to move forward. 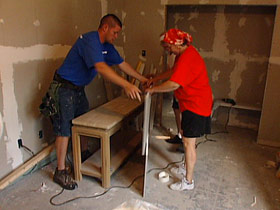 Teams of volunteers across the religious spectrum continue to come down to help. In some places, they are still gutting houses.

UNIDENTIFIED VOLUNTEER : Baby photos, Marine Corps photos, family photos — I mean, the physical work has absolutely nothing on trying to remove this out of the house.

LAWTON : But elsewhere, they’ve begun repairs and rebuilding. In Biloxi, Mississippi, Presbyterians are helping Joe Marinovich finish fixing his house. Before them, the Mennonites and the Catholics helped him.

The Southern Baptists have already mobilized tens of thousands of volunteers, and more church groups are scheduled well into the future.

JIM BURTON (North American Mission Board, Southern Baptist Convention): You can never overlook the importance of human capital. You know, as corny as it might sound, people are our greatest assets. And the depth that we have as Southern Baptists with our volunteers allows us to have a presence typically much longer than a lot of organizations. 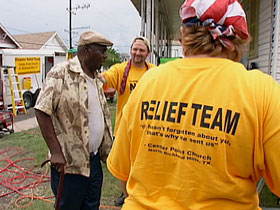 UNIDENTIFIED VOLUNTEER # 1 (To Resident): It’s good to see you.

UNIDENTIFIED VOLUNTEER #1: Good to be seen, isn’t it?

LAWTON : The Baptist-run Operation Noah has committed to rebuild 1,000 homes and 20 churches in greater New Orleans over the next two years. Pastor Jay Bruner and his Texas church group came motivated by their faith.

Reverend JAY BRUNER (Centerpoint Church): Christian means Christ-like. And when Christ walked this earth, he came to help those who were hurting and in need. And so it’s a core value. It’s just who we are.

LAWTON : Many neighborhoods like this one in New Orleans are still in limbo. Neighbors here say faith-based groups are the only ones getting something done.

MALCOLM RUSSELL (New Orleans Resident): What the volunteers been doing is coming in here and really helping the people to rebuild. You know, ever since the election I haven’t seen a politician through here. 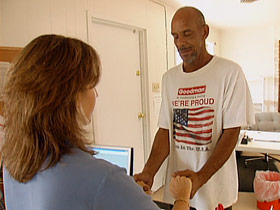 LAWTON : Malcolm Russell is one of the many trapped in a bureaucratic quagmire. His house was badly damaged, and he says he isn’t receiving any federal, state, or city assistance. He and five other family members sleep in two barely habitable rooms because they have nowhere else to go.

Mr. RUSSELL (Looking at House): And, here, you still have a lot of mold.

We’re not asking for a handout from the government. They can do what they want with the money. Just help us to get our houses back together.

LAWTON : Operation Noah tells Russell they have him on their list, but they are waiting for a volunteer group with experienced roofers and electricians. On this day, he settles for a prayer.

UNIDENTIFIED VOLUNTEER #2 (Praying with Mr. Russell): Dear Lord, we just thank you so much that Mr. Russell and his family are heading on the road back to recovery.

LAWTON : The spiritual and emotional toll of the last 12 months has been huge. 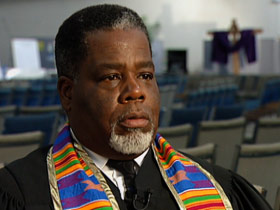 Reverend DWIGHT WEBSTER (Christian Unity Baptist Church): We’re still in a permanent state of emergency. We’re still not whole. The stress is killing us — so just not to be forgotten, not to be told, “Get over it.”

LAWTON : Clergy, such as Reverend Dwight Webster, have been trying to help their needy congregations while dealing with their own losses. Webster still feels the pain of gutting his home.

Rev. WEBSTER : Books that I had been collecting and my lecture notes and my personal notes of over 30 years — I couldn’t even pick them up with my hands or with the gloves — we had to shovel 30 years of my life up.

LAWTON : Cheryl Taylor is part of a special post-Katrina justice commission set up by a faith-based foundation. As a mental health expert, she’s especially concerned about the impact of losing a home. She knows firsthand: she lost hers too. 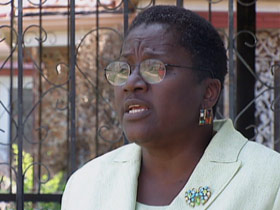 CHERYL TAYLOR (Katrina National Justice Commission): I can speak for all of us. There is no place like home. And home is not just a physical structure. It’s the families, the memories, the people.

Ms. TAYLOR : One is housing, having access to affordable housing; affordable quality heath care infrastructure here that has been devastated; affordable child care for working people; the restoration of our public schools.

LAWTON : She says the situation has been really difficult for elderly people, like her mentors Bishop James Feltus and his wife, Hazel.

HAZEL FELTUS: I’m 78 and my husband is 85, and it takes — it’s hard for us to do some of the things that individuals are doing. 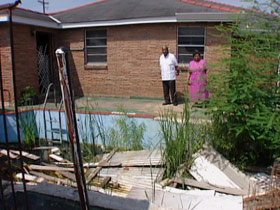 Bishop JAMES FELTUS (Church of God in Christ United): We have been taxpayers for so long and good citizens for so long. We feel like the government owes us something. And we’ve had many promises but no return. And it has been said, “Justice delayed is justice denied.” We need justice now.

LAWTON : Some residents allege that racial motivations are keeping African Americans, and especially poor blacks, from returning. Others worry about a just and corruption-free distribution of government aid.

Rev. WEBSTER : We know that there are billions of dollars on the way to New Orleans. But the frustrating piece is most of that money will not get down to the level where people need it the most.

LAWTON : Angele Givens advocates on many of these issues as president of her neighborhood homeowners’ association. But she and her husband, Joe, say that’s a resource not everyone shares. 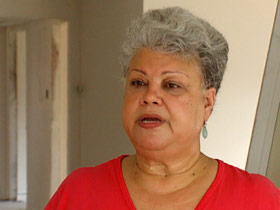 LAWTON : Churches have become an organizing point of much community activism. One umbrella group is called All Congregations Together. Connie Treger is the representative for her neighborhood.

CONNIE TREGER (Neighborhood Representative, All Congregations Together): If you go back to Martin Luther King, it was the churches that made a difference. You know, we’ve tried organizations and grassroots, but we realize that it’s going to be the churches that turn it around.

LAWTON : And they’ve finally captured the attention of local officials. New Orleans Mayor Ray Nagin has promised to meet with faith-based community leaders for at least two hours every month.

Ms. TREGER (To Mayor Nagin) (At Meeting): We want you to be committed to us. So we’re asking for that. Can we have that?

Mayor RAY NAGIN (To Connie Treger) (At Meeting): I am committed. 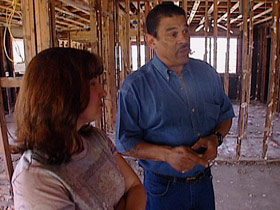 LAWTON : There have been dramatic turnarounds for some devastated churches, such as Main Street Missionary Baptist Church in Biloxi, Mississippi, and St. Paul’s Episcopal Church in New Orleans, where services in their sanctuary resume this weekend. But hundreds of others are still in ruins. This week, a coalition of national faith communities, including the National Council of Churches, launched a new program called “Churches Supporting Churches.” Three hundred sixty congregations around the country will adopt 36 New Orleans churches.

Ms. TREGER: I love this neighborhood and I love our community.

LAWTON : Treger believes her neighborhood can — and will — be revitalized. Frogs may have taken up residence in her lap pool, but she and her husband are rebuilding their home. And she’s encouraging other neighbors to return. She says through it all, her Roman Catholic faith has become stronger. 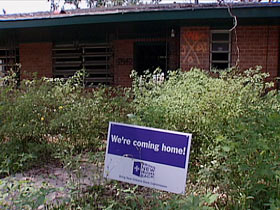 Ms. TREGER: There’s not enough tape for me to tell you all the miracles that’s happened in my life since Katrina.

LAWTON : It’s a story repeated again and again. Pastor Webster says his prayer life is stronger than ever.

LAWTON : Given the scope of the job that remains, it’s a story that will unfold for years to come. And people here say they hope the rest of the world won’t forget about it once the anniversary is over.

ABERNETHY: Kim, this visit to New Orleans, what was your greatest impression that you brought back? 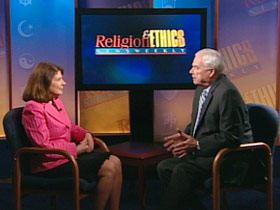 LAWTON : Well, I think it was very similar to previous trips, where I came back so frustrated that I couldn’t tell the full story of everything that I saw: the magnitude of the devastation that’s still there a year later, and the magnitude of the people’s trauma — people that I met and talked with. I think about one of the women that I interviewed — Angele Givens from my story — telling me as a young mother how she struggles with what to do: whether to bring her two little children back into her neighborhood, knowing that it’s a devastated neighborhood. And her neighbor across the street had tried to commit suicide the week before. Suicide rates there have tripled since the hurricane. And it’s just that overwhelming sense of despair that people are struggling with every day.

ABERNETHY: Because of the frustrations of dealing with the bureaucracy, or what?

ABERNETHY: And is that true in the churches too?

LAWTON : The faith-based community has been doing an amazing job of trying to help. But they’re frustrated because the needs are so great and they can’t keep up with it. I think of one Episcopal church that we visited where they’re still giving out emergency food and clothing a year later. And they cut off at 350 people served every day ’cause that’s all they can handle. And their workers tell of people still sobbing in the parking lot because of the situation that they’re in.