BOB ABERNETHY, anchor: Now, the first of a two-part story on moral issues raised by reproductive technology. This week — sperm donation. According to the fertility industry, 30,000 babies are born each year to women who have been provided with donor sperm. And the demand is growing. One issue arises from the fact that most donors want to remain anonymous. But what happens when a child asks, “Who is my father?” Betty Rollin reports.

BETTY ROLLIN: Sixteen years ago here in Nederland, Colorado, Wendy Kramer gave birth to her son Ryan. She and her then husband, who divorced months after Ryan was born, had infertility problems. So Wendy’s doctor provided her with donor sperm. 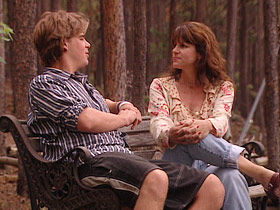 WENDY KRAMER: I had no idea where the sperm came from or anything about the donor. You know, it was always kind of a mystery.

RYAN KRAMER: I’d been seeing other kids with, you know two parents — a mom and a dad. And I just put two and two together and said, “Why do I only have one?”

Ms. KRAMER: He had this very blond, blond hair and my family is, we all have very dark hair. And it became — you know, people would say, “Wow, where did he get that blond hair?” Like, I have no idea.

ROLLIN: The older Ryan got, the more curious he became.

RYAN KRAMER: When I would look in the mirror or see myself, there were parts of me physically, emotionally, mentally, intellectually that I can pull out from my mother’s side of the family. There was this whole other side of me that I really was unsure of where it came from. You know, an interest in mathematics and science and things like that was never really strong in my maternal side of the family. 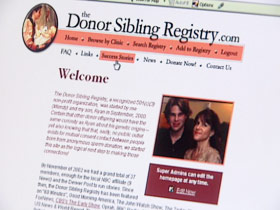 ROLLIN: Ryan also began to wonder if he had any half-siblings. Wendy’s doctor had provided little information about the donor.

Ms. KRAMER: Where do you go looking for your biological family through donor insemination? And there was nothing available. And so we sort of put our heads together and said, “Well, let’s put a little message out on the Internet.”

ROLLIN: That message led to a Web site — the Donor Sibling Registry. Although Ryan still has not found his donor, more than 2,000 people have found both donors and half-siblings.

Ms. KRAMER: When you come on our Web site, you can search by sperm bank and donor number to see if somebody matches you, and at the same time, you can also post your information so that you’re in a position then to be found.

ROLLIN: Dr. Kirk Maxey, who lives in Ann Arbor, Michigan, is one of the few sperm donors who wants to be found. He donated for many years while he was in college and throughout medical school.

Dr. KIRK MAXEY: I had direct contact with infertile patients sometimes at the university where I was a student. And I knew that was pretty devastating. I would say it was 50 percent altruism, 25 percent monetary, and 25 percent some other motivation. Sort of, well, it’s going to be interesting to have been the father of 10 other children. That’s not a bad thing. 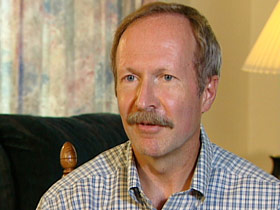 ROLLIN: How do you think of these children? What are they?

ROLLIN: One of those kids, a teenager, responded to his posting.

Dr. MAXEY: No, and I probably won’t meet her, at least [not] anytime really soon. I’m quite sensitive to the fact that I don’t have a right to intrude on her family, especially her social dad. This has got to be tough on him.

ROLLIN: Didn’t she want to look at you?

Dr. MAXEY: Oh yeah, we traded pictures right away. Yeah, she wanted to see what I look like.

ROLLIN: And did she not want to meet you? 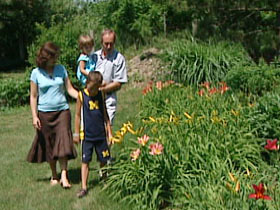 ROLLIN: So you say no to the meeting?

Dr. MAXEY: Yeah, for now. My wife’s not crazy about the idea of me going out and spending time. And you can imagine how that can multiply.

ROLLIN: Dr. Maxey and his wife, Tanya, have two healthy young children of their own. But Dr. Maxey is concerned about the health of all those biological children he doesn’t know.

Dr. MAXEY: It now occurred to me that with that many kids, I could have passed on some kind of genetic defect. And since the clinic wasn’t paying attention, I need to know for my own peace of mind. I need to know, how did these kids turn out?

ROLLIN: Most donors are between the ages of 18 and 25. Many are students and do it for the money, these days about $65 to $100 a sample. And they often don’t think that much about the consequences.

Lori Andrews is a law professor and ethicist in the field of reproductive technology. 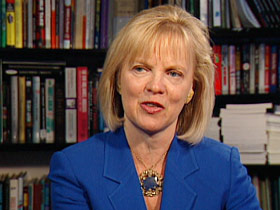 Professor LORI ANDREWS (Chicago-Kent College of Law): I did interviews with sperm donors, many of whom were medical students, and they’ve said, “Oh, I do it to get a little extra cash, to take my girlfriend out to dinner and so forth.” And I pose the question to some of them about how they would feel if the child they created showed up on their doorstep. And a lot of these guys are fairly young and they haven’t really thought it through.

ROLLIN: Professor Andrews says that legally, sperm donation hasn’t been thought through either.

Prof. ANDREWS: Over half the states have laws that say the consenting husband — if the woman is married — is the father of the child and the donor is not the father. But there are still some states where that’s a legal vacuum. And those are states in which we tend to see a lot of secrecy because the sperm donor is afraid of being hit with a paternity suit if the child learns his identity.

ROLLIN: Secrecy is the issue in the practice of sperm donation. It used to be that the identity of the donor was never revealed. But that’s changing. 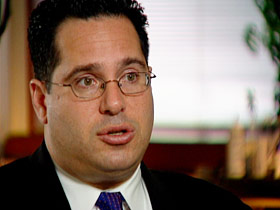 STEPHEN FELDSCHUH (Vice President, Operations, Idant Laboratory): When we started in the early 1970s, the couples that came to us were traditional. They were a male and a female. And at that time we went through tremendous efforts to make the donors match the phenotypical — physical — characteristics of the husband. We only wanted them to tell the child that the child was from Daddy.

ROLLIN: But as more and more single women and lesbian couples used donor semen, they told their children how they came to be. And children like Ryan wanted to know the donor — and wanted the donor to know them.

Ms. KRAMER: What I’ve seen over the years by Ryan is more the wanting to be known by this guy than to know this guy. I’ve sensed in Ryan a wish “he could know who I am, maybe not to meet him, but to just know that I exist.”

ROLLIN: Most sperm banks in America promise their donors anonymity. But others have started to provide donor contact information once the child reaches 18. In several countries in Europe, open donation is the law and as a result, the number of donors is down.

Stephen Feldschuh says if open donation becomes the rule in the U.S., both numbers of donors and donor quality will suffer. 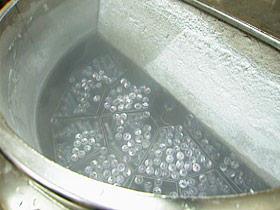 Mr. FELDSCHUH: You are going to lose the really smart, the really wonderful people who I think are now going to question, “Well, you know I’m a Ph.D graduate. Do I really want to be in a situation where down the road someone may contact me?”

ROLLIN: When asked about the ethics of sperm donation, Professor Andrews says that both donors and children should have protection.

Prof. ANDREWS: I think people should have access to artificial insemination by donor. I think it should be regulated for safety reasons so that there’s adequate screening of the donors. I also think that the children and the couples should be able to get medical histories of the donor, genetic histories, and that that information should be updated as the donor goes through life. So it’s a really big commitment. But after all, this person is starting the life of another individual.

ROLLIN: Most of the recipients of sperm donation do receive information about the medical history of their donors at the time. But now the children want contact, as do some of the donors. As a result, there have been some lawsuits and proposed legislation. According to Lori Andrews, among others, the direction is clear: whatever the difficulties, more openness, more disclosure.