KIM LAWTON, guest anchor: Like many places across the African continent, the tiny fishing village Hamburg in South Africa has been devastated by HIV/AIDS. Carol Hofmeyr is the doctor who treated many of the villagers there. She enlisted the women of Hamburg to create a massive altarpiece as a symbol of hope and resurrection. That altarpiece is now being displayed here in the U.S. Hofmeyr described it to us at St. James Episcopal Cathedral in Chicago.

Dr. CAROL HOFMEYR: An altarpiece was traditionally made for churches to stand behind the high altar to show images that would aid people in their worship. 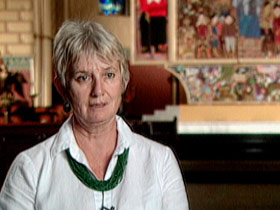 This altarpiece is based on an altarpiece that was completed in the early 16th century, also made for people who were suffering and dying from an incurable disease.

Hamburg is a small village, and there are 3,000 people there. Up to 200 people have died in our little village.

Each section of the art piece is a separate piece and has been worked on by groups of women who daily sat stitching, talking. There were 120 women. It took us six months of hard work.

In the center you see a young widow dressed in traditional widow’s clothes. On either side of her are her children, and a grandmother of the children. And these are the people, the vulnerable people left once the breadwinner, the man, has died.

A recognizable fig tree shows the tree of life — people in their different uniforms and costumes doing all forms of worship that are found in Hamburg. 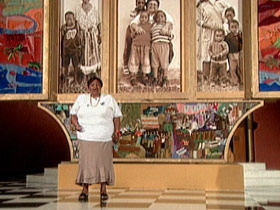 In the last panel there is a map of Hamburg, and I saw it as Hamburg being taken up into some other place, where suffering was no more.

The panels open again. We decided to change the materials quite radically. We changed from embroidery to photography. Those are three photographs that you see of grandmothers in Hamburg. We wanted to depict the strength of these women, the resilience and the ability to withstand the most awful things that can happen.

In the middle panel you see Eunice, and she is with her three grandchildren. Eunice will sing a song meaning “the Lord holds me in his arms and comforts me.”

This altarpiece is dedicated to older women because they carry in them a firm belief in the continuity of life, in the meaning of life, in their love of their families, and they’re able to live on and live on well in the small things in spite of enormous tragedy, and that is a great comfort.

LAWTON: The altarpiece next goes on display at the University of California, Los Angeles.