BOB ABERNETHY, anchor: Debate continued this week over the likely effects of a controversial bill Congress passed just before it went home. It gives the president power to order trials of suspected terrorists in military tribunals, not regular courts, and it denies suspects the right to challenge their detention. Is that constitutional? Also, although torture is ruled out by the U.S., the new law does not prohibit sending suspects to other countries where torture has been used. Tim O’Brien reports. 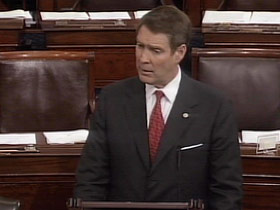 TIM O’BRIEN: Shocking photographs from the prison camp at Abu Ghraib, and a Supreme Court ruling that President Bush must have congressional approval to create military tribunals, combined to produce an agreement on Capitol Hill that will give suspected foreign terrorists many of the same rights given any criminal defendant in the U.S.

O’BRIEN: But those deemed enemy combatants by the president will be denied a basic right accorded most criminal defendants — the right to challenge their detention before or after trial through a procedure known as habeas corpus. That outraged some Democrats. 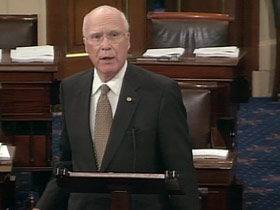 Senator PATRICK LEAHY (D-VT): It would perpetuate the indefinite detention of hundreds of individuals against whom the government has brought no charges and presents no evidence without any recourse to justice whatsoever. Maybe some of them are guilty. If they are, try them, try them! But you have to understand, there are people in there who have no reason to be there. There’s no charges, no evidence. This is un-American. This is unconstitutional. This is contrary to American interests, and this is not what a great and good and powerful nation should be doing.

O’BRIEN: And some liberal legal scholars, like Harvard’s Alan Dershowitz, lamented the law did not do enough to stop torture.

Professor ALAN DERSHOWITZ (Harvard Law School): I think we have the worst possible situation with regard to torture and inhuman treatment. We deny it exists. We claim to comply with all the relevant treaties, and yet we have no real accountability.

President GEORGE W. BUSH: The values of this country are such that torture is not a part of our soul and our being. 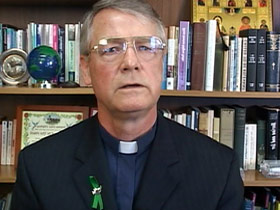 O’BRIEN: Yet, it has happened. The National Council of Churches is now helping distribute this video at no charge for congregational viewing, purporting to document torture as a tool in the U.S. arsenal against Al Qaeda.

The Reverend Dr. BOB EDGAR (General Secretary, National Council of Churches, introducing “Outlawed” DVD): You’re about to witness two stories of two individuals that our government held in secret and tortured. These stories are hard to watch. Ask yourself what kind of a nation are we. Do we want to lift our nation to higher standards of moral commitment to human rights and civil rights and people’s rights?

O’BRIEN: The video, produced by a coalition of civil rights groups, is indeed hard to watch. One case involves 23-year old Binyam Mohamed, an Ethiopian national who claims to have been stopped by U.S. officials as he tried to board a plane in Pakistan on his way home to England. He had used a friend’s passport for identification.

VOICE OF BINYAM MOHAMED’S BROTHER (from “Outlawed” DVD): I refused to talk in Karachi until they gave me a lawyer. I said it was my right to have a lawyer. The FBI said the law has changed, there are no lawyers. You can cooperate with us the easy way or the hard way. On the first day of the interrogation, Chuck said, “If you don’t talk to me, you are going to Jordan. We can’t do what we want here. The Arabs will deal with you.” 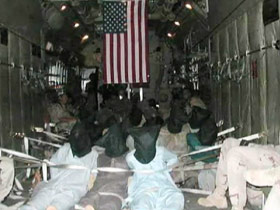 O’BRIEN: Mohamed said he was then flown from Pakistan to Morocco in a CIA plane, where his new hosts repeatedly tortured him.

VOICE OF MR. MOHAMED’S BROTHER (from “Outlawed” DVD): One of them took my penis in his hand and began to make a cut. He did it once, and then stood still for maybe a minute, watched my reaction. I was in agony, crying, trying desperately to suppress my feelings, but I was screaming. There was blood all over.

Prof. DERSHOWITZ: We’re doing it! We’re denying it, and there’s no accountability, and that leads to Abu Ghraib. When the president, the secretary of defense, the vice president all say, “Torture? Us? No, we’re not doing it.” But then they’re sending subtle messages to the troops on the ground, to the CIA agents: “Do whatever you have to do to protect Americans,” and that message is received as it’s okay to torture, as long as you’re not caught, as long as there are no photographs, as in Abu Ghraib. 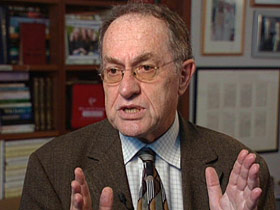 Mr. MOHAMED (from “Outlawed” DVD): It never crossed my mind that I would end up being hauled halfway across the world by the Americans to face torture in a place I had never been before — Morocco.

O’BRIEN: Last November, the Bush Administration reluctantly confirmed a WASHINGTON POST report that it had been shipping detainees off to distant prisons in Europe — rendition it is called — but officials insisted torture was never the motive. 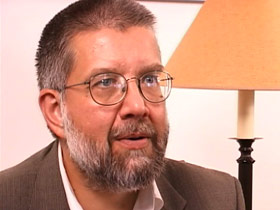 O’BRIEN: Could such abuse have occurred without U.S. consent or even knowledge? Consider that the U.S. does provide Third World allies with arms, modern computer equipment, and much more, all in exchange for information — that according to the chief architect of the CIA’s once clandestine rendition program.

MICHAEL SCHEUER (Former CIA Official): All of those things are important, and they are necessary to forge the relationship. But they’re also elements which make you very cautious about the information you receive from those intelligence services. They’re not going to want to give you, for example, information that might make you think the relationship isn’t worth the money you’re investing in it.

VOICE OF Mr. MOHAMED’S BROTHER (from “Outlawed” DVD): When the Americans told me in Karachi, “Our friends the Arabs know how to deal with you,” I didn’t really know what they were talking about. Now I understand why the Americans called the Moroccans “our Arab friends.”

O’BRIEN: Mohamed is now being held at Guantánamo and faces a trial before a military tribunal on charges of conspiracy to commit terrorism. If he were an Al Qaeda operative and had information that could perhaps save thousands of lives from a 9/11 style attack, would that have made a difference? 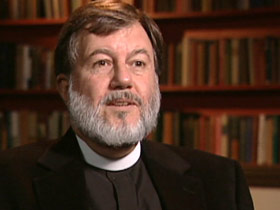 O’BRIEN: Not to Reverend George Hunsinger, who in person and on his Web site has been mobilizing religious groups to take a stand against torture.

Rev. HUNSINGER: There can be no compromise on torture. Torture is never justified. If torture is not evil, nothing is evil.

O’BRIEN: Alan Dershowitz shares Reverend Hunsinger’s revulsion of torture but, finding it inevitable, has a novel approach on how to deal with it.

Prof. DERSHOWITZ: I personally am completely opposed to torture and the use of degrading methods. But I think it’s going on, and therefore I propose the use of a “torture warrant” which would require the president of the United States to sign on the dotted line and say, “I am responsible. I made a decision to violate the law because 100,000 American lives were at stake.” If we ever had a situation where we had in captivity somebody whose torture could theoretically produce information to save lives, we would do it. The only question is, would we do it with accountability or without accountability? If we’re going to do it, I want us to do it with accountability. 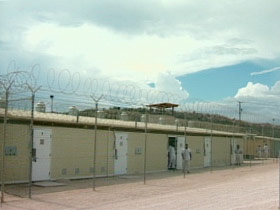 O’BRIEN: The measure Congress approved still permits rendition — the transfer of detainees to prisons in distant countries — but it does not permit torture, which several senators noted violates not only international human rights law but also U.S. criminal law.

Senator LINDSAY GRAHAM (R-SC): Torture has always been a crime, so anyone who comes on this floor and says the United States engages in torture, condones torture, that this agreement somehow legitimizes torture — you don’t know what you’re talking about.

O’BRIEN: For the Guantánamo detainees, the new law sets guidelines for their trials before military commissions. But since there is nothing to prevent rendition, there are no guarantees that what Binyam Mohamed claims happened to him couldn’t happen to them.

ABERNETHY: Already prisoners at Guantánamo Bay and this week in Afghanistan have filed suit demanding that they be formally charged and permitted to talk with lawyers or be let go.