Read more of Kim Lawton’s September 18, 2006 interview with Father Claudio Diaz, director of Hispanic ministry for the Archdiocese of Chicago and administrator of Providence of God Parish:

Q: How influential is religion on Latino voters as they develop their political opinions and motivations? 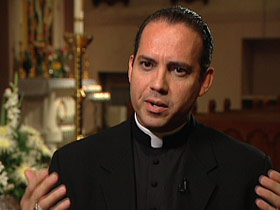 A: Religion is a very important component within Latino reality here in the States and outside of the States. Definitely, the church is always looking for the benefit of the people of God. In this case, the church in a very particular way is very careful with anything that affects the Hispanic community. The Latinos are 40 percent of Catholic population; therefore it’s a very significant group of the body of Christ, and those 40 percent are the ones we can count. There’s a whole number of Latinos that we cannot count because they don’t register. It’s not part of their tradition, for many other reasons. Therefore, we suspect that the population within the Catholic contingency is higher, perhaps 50-55 percent. When it comes to politics, of course there is an understanding in our Constitution, in our tradition here in the States that Catholic — church and state should be separated. We understand that. However, there are many areas where they do co-mingle, where they do have to work together somehow through a formal agreement or maybe an informal agreement.

Q: What kinds of issues are particularly important to Latinos as they consider their political stands and their votes? What specific issues really matter to them?

Q: How big has the immigration issue been as politicians debate comprehensive immigration reform? Has this really mobilized people in your community?

A: Indeed, indeed. This issue of developing a comprehensive reform for migrants in our country, it has been a force for many members of my parish, and I know many members of parishes all across the United States of America, because it touches the foundation of justice within a particular group here in the States. Many parishioners, many Latinos, many non-Latinos have been part of this wave that deals with our migrant-immigrant community. And as for me, I think it’s very important that we take this seriously, that we do take this seriously, and it doesn’t matter if you’re coming from a political point of view, economical point of view, religious point of view. This is to be taken seriously because it’s a big group we’re talking about, and it’s a group that has been here for many, many, many centuries.

Q: You mentioned the issue of justice. What are some of the religious and spiritual issues that come into play when we’re talking about immigration? What are the theological and spiritual principles behind this community and civic issue?

A: Let’s talk about the theology of immigration. Our theology — the Roman Catholic Church — starts with the Old Testament. In the Old Testament we have the people of God, the Israelites, looking for the Promised Land, looking for a place to be. And from the Old Testament we have teachings on, you know, be good to the foreigner, be good to those who are not in your circle, be good to those who are from outside of your circle, and that teaching has certainly passed to Jesus Christ in the New Testament. In the New Testament, we have the Lord Jesus Christ making connections with the so-called foreigners, you know, with the Roman soldier, with the woman from Canaan and so forth. So it’s a matter of equality. The theology is that foreigners are brothers and sisters through the Lord Jesus Christ. That reality cannot be denied and needs to be addressed. And this is why, from a theological point of view, it makes sense to address this issue, not to pretend that they don’t exist, not to pretend that this is not a big deal; it is a big deal because this is a community that has been with us for centuries and for many, many moments in the history of this nation.

Q: How has immigration mobilized some of the people you work with in your archdiocese and your parish to get involved in civic, political and community issues? Has it mobilized them in ways they have not been involved before?

A: Yes. This issue has moved a lot of people in different ways. My goodness, you’re talking about giving a voice to the voiceless. You’re talking about taking the little ones, those who are undocumented, those who don’t have an identity in our society, and you’re talking to them, with them, and for them. Also, because it’s a matter of justice, you are bringing to the surface, you know, men and women who are part of our society, and the result of that is mobilization. People move because this is such an emotional issue. Yes, it’s political, yes, it’s spiritual, yes, it is religion and economics, but we’re talking emotions. We’re talking human beings, and all kinds of emotions arise, you know, to the discussion of this issue — our immigrant community in the United States. What surprises me is that all kinds of people are coming to the table. This is not just about the Latinos or Hispanics talking. Non-Latinos are talking as well, and non-Latinos are giving voice to the voiceless. Now let’s be fair. This nation was founded on immigrants. A hundred years ago it was the Irish and the Polish and the German, and God bless the Irish and the Polish and the German. Well, now it is the Hispanics. Now it is time for a new group to be attended, to be taken care of, to see what it is that they need to become even better members of our society.

Q: In what specific ways are people making their voices heard?

A: Let’s begin in the spiritual realm. Prayer services, masses, liturgies — that’s the first step as a Catholic Latino. You know, you start from God; then you move along. You go to different kinds of marches, different kinds of vigils in front of a senator’s office, a congressman. We did go to Washington, you know, and then we move to the level of politics. You know, we start an exchange among politicians, and hopefully we will get to the White House, to our president, to see if we can have a healthy discussion. So as you see, we’re moving in different directions in the house, spiritually speaking, in our surroundings, as we do marches and vigils and [move] into politics.

Q: Are people more politically interested than they have in the past? Are people registering to vote? Do you expect to see a new political movement?

A: What I’m saying is that on this particular issue there is far more involvement than on other issues in the past.

Q: You mentioned Latino Catholics are very concerned about family issues. Some Latino Catholics were mobilizing with the church against gay marriage and against abortion and conservative social issues that are important to the community. If you put those issues up against immigration, which one is going to take priority for the Latino voter?

Q: And what message should politicians and the political parties take from all of that?

Q: Politicians are also hearing from conservative constituents who are concerned about protecting borders. Do you think they are receptive to that?

A: I am under the impression that there is a receptivity on behalf of all politicians. I don’t know the intention of that receptivity. Some of them might do it because they want more votes. Who knows? Others do it because of justice; others do it because it is the “in” issue and the vote issue at this point. I don’t know the real intentions of all of them. What I’m telling you is that certainly politicians are interested in this. Whether you are from the left or from the right, if you want to be a politician in the year 2006, you have to deal with the issue of immigration.

Q: What do you think the long-term impact of the Latino political movement will be in the U.S.?

Q: What do the people you deal with every day experience? How has this political and community issue affected them and their outlook on the kind of voice they might have in America?

A: Fr my parishioners this movement has certainly been very crucial on many levels. The first level is the reality that they have to verify their identity, and that means that they have to be informed, they have to be part of the process of lawmaking. They have to be — they have to have a voice within the whole process. Whether that voice is heard or not, that should be taken care of and should be taken into account. But they want to be part of that process that somehow will determine their lives and their future. So it’s been like a jolt of energy to really have a group of people be updated, get informed, be organized. Notice that many of these marches that have involved immigrants in the Latino reality — they haven’t been tinted by a wave of violence. You don’t hear that. Of course, you may hear an event here, maybe something happened over there, but those are isolated events. You don’t see that as the trademark of the Hispanic immigrant movement as we speak. So for the first time a group of people in a very nonviolent way here in the States are speaking and are talking and are saying, “Take us into account. Let’s go to the table, let’s work together.”

Q: And what responsibility does the Catholic Church have to be one of the institutions doing the informing and organizing on this?

A: The church has the responsibility and the duty, the Christian duty, to give voice to the voiceless, to be for the little ones, to walk with all the children of God and in this case to walk with the immigrant community. I just hope for America to really, really open their eyes. I hope for the United States of America to understand the richness that this particular group brings, you know. We are a nation, once again, founded on immigrants. Then let’s deal with this new group of immigrants in a fair, Christian fashion.

Q: What challenges do you see for the two political parties as they deal with the immigration issue?

A: Both main parties here in the United States of America do have challenges. They do have challenges on other levels. But when it comes to the immigration level, they both have challenges, because the question is, why am I doing this? Why am I listening to the immigrant community or why not? Sometimes I feel that they don’t know the answer to that question. And if the answer is a very private, selfish question whichever way because you want to gain some votes or because you want to do what you think is right from your political perspective, either way are two extremes in the spectrum. But I think that the political parties should listen and should have only the best intentions when dealing with the immigrants. Even though as a church we cannot be political, as in allegiance to a particular party, we are to be political because we are political creatures, except that as a Christian you will be a political creature from the perspective, the platform of Jesus Christ.