BOB ABERNETHY, anchor: Now, a special Easter report. Last year at this time, we profiled two pastors in New Orleans. Both were in their first years at their churches when Katrina hit. They were working hard to comfort their congregations and help rebuild their communities, all while dealing with their own losses. Given the lack of progress in so many areas of New Orleans, we wanted to check back with those same pastors. Kim Lawton asked them how they are reflecting on the themes of the Easter season this year. 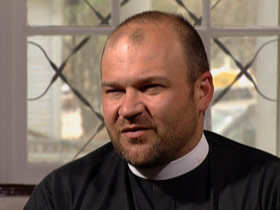 KIM LAWTON: Palm Sunday in the Broodmoor neighborhood of New Orleans. Members of the Episcopal Church of the Annunciation are remembering Jesus’ entry into Jerusalem just before the crucifixion, and they are praying for the renewal of their own city. Rector Jerry Kramer says it’s a bittersweet time here.

Reverend JERRY KRAMER (Rector, Church of the Annunciation): Good things are happening, and we need to dwell on those things, but we still have an incredible road in front of us. And I just — there’s no way people around the country have any clue what we’re dealing with here, and the uphill fight that we’re enduring right now.

LAWTON: Across town at First Street United Methodist Church, Pastor Lance Eden says day to day his people still feel stuck between the suffering of Good Friday and the hope of Easter Sunday. 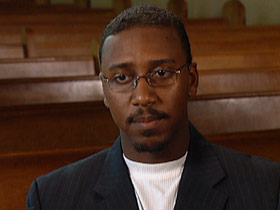 LAWTON: Nineteen months after Hurricane Katrina, recovery in New Orleans remains painfully slow. Residents are more frustrated than ever by the official response at the city, state and federal levels. In that context, Eden and Kramer say, themes of the Easter season resonate in new and poignant ways.

Last year, Church of the Annunciation was worshipping in a doublewide trailer. Only about half of the congregation members had returned. Their church had been ruined by the waters that had flooded it for weeks after Katrina. They had planned replace it with a new modular building. But then they realized it would be cheaper to try and salvage the old church. So they’ve begun worshipping there again, even though there’s still no electricity or heat, and the cross on the roof still hasn’t been repaired.

Rev. KRAMER: You know, it is home even without power and flooring and walls and things like that. We’re home.

LAWTON: The congregation now has more people worshipping with them than there were before the storm. Many new members were drawn by Annunciation’s active role in relief efforts and community rebuilding. They’ve started renovating part of the old building in order to house the faith-based volunteers who still come in steady streams. They’re calling the project Resurrection House. 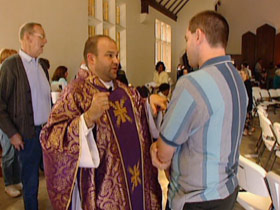 Rev. KRAMER: God didn’t cause this storm. Where God comes in is in the redemption of it, and in the resurrection, which again doesn’t mean resuscitation. It means something new. It’s a new environment here, and you have to adapt to be relevant to bring the Gospel forward in this environment.

(speaking to volunteers): This is where you saw people on the rooftops being pulled off and “Help us, help us.” All in here. Every patch of green that you see had a house on it pre-Katrina.

(to young woman): Where did you live?

UNIDENTIFIED WOMAN: My mother was right around the corner here.

LAWTON: In addition to working in the Broadmoor neighborhood, Annunciation and its teams of volunteers have been active in the devastated predominantly African-American Lower Ninth Ward, where many churches were destroyed. They have a new mission church there called All Souls. It was started to meet the spiritual needs of the few who’ve come back.

Rev. KRAMER: You know, pre-Katrina I would have had no business going down to the Lower Ninth Ward. I didn’t know where it was. Now I have friends there. I mean, that’s grace, and that’s something God is up to in this mess. 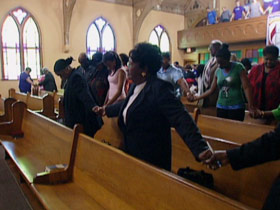 Rev. EDEN (preaching): You may be sick, busted, and disgusted. Produce anyway.

LAWTON: First Street United Methodist Church, which suffered little damage during the storm, has also grown. The congregation has almost tripled, in part because of nearby church closings, and in part because of the church’s increasingly visible role as a community organizer.

Rev. EDEN: But we’ve had a large influx of persons who are of other denominations, who are not United Methodists, who have become a part of our church and are looking for a church that’s really doing something.

LAWTON: Last year the church partnered with a secular non-profit group, the HandsOn Network, to host and organize volunteers. Temporary housing was put up in the church’s multipurpose room. A year later the bunk beds, now well-worn, are still there, while the network looks for a more permanent home. The volunteers have gutted and repaired thousands of homes and helped clean up the community. But rising crime in their neighborhood is placing new pressure on ministry. 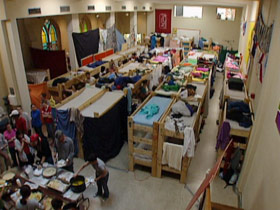 Rev. EDEN: From that corner to this corner is where a lot of the shootings happen, and as the church and the HandsOn organization, we’ve had to pay $6,000 a month to continue to keep a police officer on guard to protect the volunteers and the people in the community.

LAWTON: Eden had been out of seminary only a couple of months when Katrina hit. He says he’s learned a lot about being a leader.

Rev. EDEN: As a pastor, learning how not to take the mess of church folk and put my foot down — being 28 years old and some of them are twice my age — and say no, it’s not happening that way; that’s not what God has called us to do.

(speaking at conference): But we are in transition, and transition means that we’re going somewhere.

LAWTON: He has also become a prominent voice calling for more grassroots action to fight for social justice in the city. 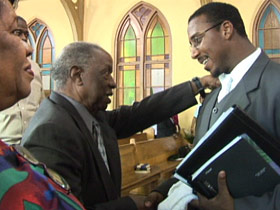 Rev. EDEN (speaking at conference): I’m crazy enough and radical enough to believe that we do have hope here today. I’m not counting it out. It’s not over ’til God says it’s over.

LAWTON: Both ministers have faced new personal challenges over the past year. It wasn’t until the end of this past February that Kramer and his family were finally able to move back into their home.

STACY KRAMER: Thanks. We pretty much sealed this room. It was leaking like a sieve.

LAWTON: How much water did you have in here? 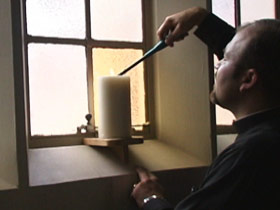 LAWTON: It took more than a year to sort everything out with the contractors and the insurance company.

Rev. KRAMER: The big problem with insurance companies is, you know, they want you to take the quick settlement, and we were just blessed, you know, to be in a position where we could fight it for a good year, year and a half.

LAWTON: Kramer gets frustrated when people suggest that New Orleans shouldn’t be rebuilt.

LAWTON: Still, he acknowledges the victories here are all hard fought, and the battles take a toll.

Rev. KRAMER: It’s still really hard and we don’t really — I was sharing with the congregation Sunday — don’t see any light at the end of the tunnel yet. I’m tired. We’ve been doing this for a long time, and I’m tired.

LAWTON: He says last month his morale reached its lowest point since Katrina. 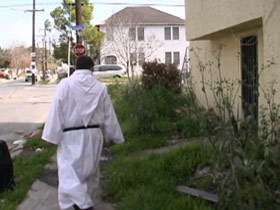 Rev. KRAMER: You have to absorb a lot of people’s pain and hurt constantly, and then you look at issues on sort of the macro level, with the total collapse of government here, absolutely, and the incredibly slow pace of something resembling progress. It wears you down.

LAWTON: Even the Episcopal bishop, Charles Jenkins of the Diocese of Louisiana, recently acknowledged that he has post-traumatic stress disorder.

Rev. KRAMER: Well, I mean we have about 200,000 people in the city right now, and we probably all have post-traumatic stress disorder. Just some are brave enough to admit it. But we’re all wounded in some way.

LAWTON: Do you ever feel like, “Okay, I did my duty. Now it’s time for someone else to step up”?

LAWTON: The challenges, he says, are teaching important spiritual lessons. 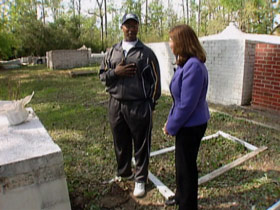 LAWTON: Last year, Lance Eden told us his 84-year-old grandmother helped center him spiritually. We followed along as he took her to see the damage Katrina had done to the family cemetery. She passed away days before we returned this year. Eden took me back to the cemetery to show me where she would be buried.

Rev. EDEN: This is home, this is home. And I think it’s okay, because she’s going to be home. She wasn’t just a grandmother, but she was a teacher, she was a counselor, a person I could tell anything, and I mean anything, to and as a pastor you don’t have a lot of friends like that. And who becomes that root, that grounding? Definitely the Lord above. But on earth who becomes that, that can fill that void? I don’t know yet.

LAWTON: Eden had been living in his grandmother’s home prior to the storm. Katrina destroyed almost everything, except the outer walls. He now owns that house and hopes to begin rebuilding in the next few months. In the meantime, he still sleeps in his church office. He says he and his people deeply feel the Good Friday theme of being abandoned. 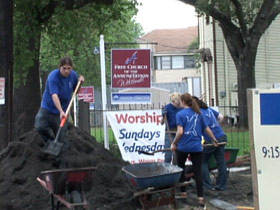 LAWTON: He says that has changed their understanding of Easter hope.

Rev. EDEN: The hope now, I think, is much different. I think that the hope now is that we’re going to have to do it ourselves, and looking at the power of being able to come up out of a grave through the help of the Lord, and nobody else but the Lord.

LAWTON: Despite the ongoing struggles, both pastors say resurrection is very present in the lives and work of ordinary people.

Rev. EDEN: Every time a volunteer crosses our door, or you see a charter bus of volunteers coming, I see the hope and the resurrection. Neighborhoods that are pulling together, people in the community who are from New Orleans who are pulling together to make a difference, we see hope there.

Rev. KRAMER: Absolutely, if you have eyes of faith and eyes to see, God is moving here powerfully in people’s lives and in the community. You have to look for it. But, you know, we see little mustard seeds blossoming here and there, and heck, yeah, that’ll preach on Easter Sunday.

LAWTON: Easter Sunday, and likely long beyond it.