BOB ABERNETHY, anchor: We have a story today about volunteers who go to another country to help take care of the poor and sick and discover they’re getting back much more than they give. Lucky Severson found this group of volunteers in Africa — in Tanzania.

LUCKY SEVERSON: Most tourists come to Tanzania to take a photo safari through a wonderland of wildlife. There are few places on earth that can match it. On the other hand, there are an increasing number of tourists who come to Tanzania to comfort a dying old lady or hold a little orphan girl. It’s called “voluntourism.” 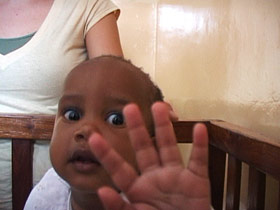 BETH WATSON (Volunteer): We’re not trying to change the world or anything, but I think that it does definitely make a difference for these kids to have us here.

SEVERSON: Beth Watson just graduated from college. She’s like most volunteers here — young but not starry-eyed.

Ms. WATSON: I mean they just want to be held sometimes and there’s a lot — there’s not enough hands to be able to do it.

SEVERSON: Beth paid her way to come here and work with a program called Cross-Cultural Solutions, one of numerous organizations that have sprung up over the last several years. Most volunteers come for three weeks and rarely stay longer than three months. Stacy Monk is a business consultant from Florida. 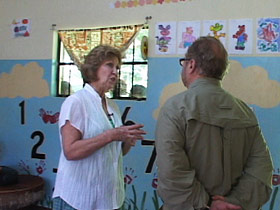 SEVERSON: Five days a week they work in places like schools, orphanages, hospices. Not all are young. Connie Deuschle is a human services professor at Indiana University. She’s also a nurse.

CONNIE DEUSCHLE (Volunteer): As you get older, you just give back. You know, you’re not going to be here very long, and you’re not taking it with you. So what can you do while you’re here to help sustain the next generation and for your kids and their kids?

SEVERSON: Most are Americans, but volunteers come from all over. Pat MacPherson is a Scotsman who lives in Australia. He’s back for the second time.

SEVERSON: Even before he sold his engineering company, MacPherson volunteered at a soup kitchen. Now that he’s got the time, he plans to devote his life to kids who have no voice.

Mr. MACPHERSON: We’re laughing and joking amongst ourselves: “Has that kid been fed?” Because we never know who’s been fed and who hasn’t been fed, you know, the quiet kid that’s not going to make a fuss. We’re not sure if they get fed or not. 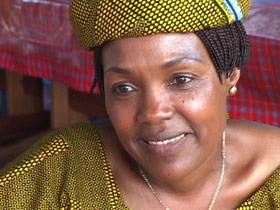 (to Ms. Simba): Why do you see so many more women than men?

Ms. SIMBA: Oh, I believe that maybe women have more passion, or more compassion, than men have. Maybe men are too busy. 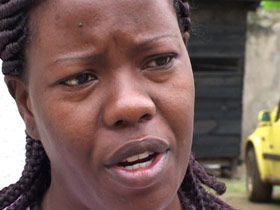 SEVERSON: Some volunteers work at this hospice, which was started by this remarkable woman, Winfrieda Mwashala. She’s a nurse who believes too many AIDS patients were dying not of AIDS but for want of health care. She also cares for babies who were born HIV positive.

WINFRIEDA MWASHALA: We have 18 children, but yesterday we had a death of one child. Yeah, two days ago she had severe chicken pox, and we tried our level best. Yeah, but then she died.

SEVERSON: You would think this would be a sad place, but it’s more a place of hope. Patients young and old are living longer, healthier lives. These mothers are HIV positive and they are knitting purses to help pay for their care. To say they were delighted when we bought two purses would be putting it mildly.

Zoey Flanigan is like several of the unpaid helpers here, from a family where service was always extolled as a virtue. Zoey started volunteering when she was in the eighth grade. She says she doesn’t count on governments to get things done. 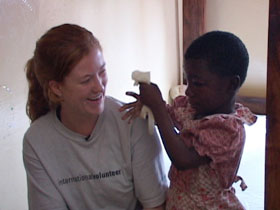 ZOEY FLANIGAN (Volunteer): I mean, I’ll vote. I’ll do what I can. But I know for the most part this is where I know I can do my best. So I just keep doing this because I can see it and I can feel it.

RUTH DAVIS (Volunteer): This is Connie, and this is Linda, right?

SEVERSON: And they’re all HIV positive?

Ms. DAVIS: I think that sometime, you know, you live your life in certain perimeters — you know, a box, the box that you live in, your reality. And it’s great to get away from that reality, to break out of that box and sort of test yourself again, even if you’re old like me.

ALLY DAMAND (Volunteer): I love it! Absolutely wonderful. Better than I ever imagined.

SEVERSON: Ally Damand graduated from college, then quit her job and headed to Tanzania. She says what most everyone we spoke with said, that this experience, brief though it is, changes their perspective on life. 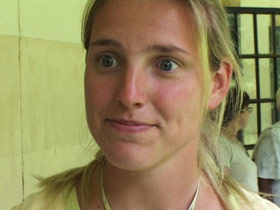 Ms. DAMAND: They’re some of the nicest, happiest, most caring people I’ve ever met, and they have less than anybody I’ve ever met at home.

Mr. MACPHERSON: I’m getting more than they’re getting. You know, you just need to be around these kids to realize how much we get from them. It changes you more when you go home — how you have a different perspective of what’s important and what’s not important. The important things are not important.

Ms. SIMBA: They say that when they go home they’re going to do things differently, because they don’t think they need as much, because back home they have a lot, and they’re still not happy. Here they see people have very little, very little resources, but people have ever growing smiles. People are happy.

SEVERSON: It’s not all work for this group. This is, after all, cross-cultural “voluntourism.” They also came here to get a taste of the country. It’s part of the package.

Skeptics of programs like Cross-Cultural Solutions say they are a comfortable way for rich Americans to take a vacation, get a tax break for their charitable contribution, and feel good about themselves. But many volunteers say they had to save, borrow money, raise funds from friends and their church to get here. Some do agree it would be better if they could stay longer. 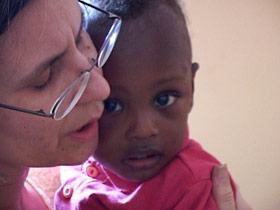 Ms. MONK: Moment to moment I feel like I’m making children smile, so that’s good. I definitely feel like I’m getting more out of this experience than they are. I feel like it’s great to play with beautiful children, and they sit on my lap, and they kiss me, and “mazungu” and “weupe,” and I feel great. But at the same time I feel like in a span of three weeks I really — I can’t do for them what I would really like to do for them.

Ms. SIMBA: Three weeks is good enough time for someone to learn from the volunteer, and also for the volunteer to learn something from the community.

Ms. FLANIGAN: I know it helps. It’s better than not being here.

SEVERSON: It has even if it just helps this little girl for a few moments right now when she knows you care about her, huh?

Ms. FLANIGAN: Yeah, I mean she already called me her “rafiki” — that’s her friend. She may not have a lot in her life, and I don’t mind being her friend. I enjoy it.