BOB ABERNETHY, anchor: One of the problems of many churches — of all varieties — is finding and keeping really good music directors. For many of the best of them, it takes a sacrificial devotion to the church to pass up the riches offered by the popular music business. Bob Faw takes a look at the situation in some African-American churches.

Choir Singer #1 (Mississippi Boulevard Christian Church): No matter the storms in your life.

BOB FAW: The music, the voices lifted to God are glorious.

FAW: At the Mississippi Boulevard Christian Church in Memphis, Tennessee that majestic sound does not come easily. It takes work. 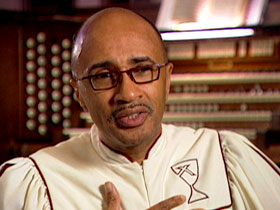 FAW: From his choir, this minister of music, Leo Davis, seeks perfection.

FAW: Davis is demanding, because for this congregation, and traditionally for the black church, music, says the pastor here, Dr. Frank Thomas, does more than supplement the spoken word.

Dr. FRANK THOMAS (Pastor, Mississippi Boulevard Christian Church): Music comes as a softener of people. It allows me to gradually open myself to receive the word. And that’s why you have so much music in church, because people can’t just receive, generally receive, the raw word.

Choir Singer #2 (Mississippi Boulevard Christian Church): Yes, Lord, I will do what you want me to do.

FAW: Indeed, this congregation has witnessed how music performed well can both transcend and transform. 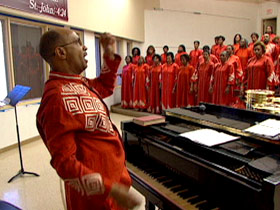 FAW: The problem is that accomplished ministers of music like Leo Davis are a vanishing species. Increasingly, black churches throughout the country are finding it harder to hire skilled musicians like him.

Dr. THOMAS: It does worry me, very much so, because I think, you know, for example, if we lose the ability to do spirituals, that bothers me, ’cause it has an historical connection. So it bothers me that we may lose some very valuable pieces of music.

Dr. GARY SIMPSON (Pastor, Concord Baptist Church of Christ, Brooklyn, NY): It’s a difficult thing to try to find someone trained. I talked to one of my friends who told me it took him five years to find a musician finally that would be his minister of music.

FAW: Dr. Gary Simpson, pastor of the historic Concord Baptist Church of Christ in Brooklyn, New York, knows the problem all too well. For nearly a year now, his church has been unable to hire a new director of music.

Dr. SIMPSON: We are not training musicians in the music of the church, which the black church did all along its tenure. That kind of commitment is gone, for the most part.

FAW: Music programs in public schools have been slashed, producing fewer musicians, Simpson adds. But the biggest handicap facing the churches is the world outside, where musicians can find greater fortune — and fame.

FAW: For the last four months, Dr. Glen McMillan, who teaches music at a college nearby, has been auditioning to fill that vacancy at Concord Baptist. He knows he will be judged, in large part, on how well he performs. 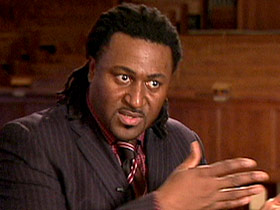 Dr. GLEN MCMILLAN (Interim Music Director, Concord Baptist Church of Christ): We’re in this whole megachurch mentality, where the church, to me, has become so performance-based that everything is a quick fix. The church has been a place where you could express your gift and nurture your gift in the same process. Now it’s more quick-fixed.

FAW: And that is the other dilemma facing black churches. They are not just competing for musical directors.

Dr. THOMAS: There are a lot of things competing for people’s attention. So how do you get people to pay attention to you? So you have to be very good at what you do. Mediocrity will not get you a hearing in today’s world.

FAW: And that competition is fierce — congregants accustomed to dazzling “performances” on VH1, BET or their iPods. To reach them, some churches conclude, “We, too, must entertain.”

Mr. DAVIS: I see it all the time. When it’s not planned well and when it’s not open to the moving of the Holy Spirit, then it becomes entertainment.

FAW: Some, like Dr. Frank Thomas in Memphis, refer to it as “sunshine music.” 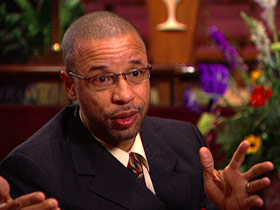 Dr. THOMAS: Some music has bad theology, right? Some music, you know, has stuff that the Bible does not say. It’s like giving people cotton candy. We can give people cheap answers to deep questions.

Dr. MCMILLAN: We have a group that is coming out that is a hip-hop crowd, and the church is saying, “This is great!” But where are those things that are so important — the tradition of music, the hymns, and especially, in terms of black people, the Negro spirituals?

Dr. MCMILLAN: I don’t believe that if you did hip-hop 20 years ago that you’re going to remember a hip-hop line. But you will remember “Come thou fount of every blessing” if you learn it, or you will remember “Amazing grace, how sweet the sound, that saved a wretch like me.”

Mr. DAVIS: Those songs live on. They live on because they’re sustaining. You want the younger generations coming up to be part of that, and to embrace that, and to learn it and to pass it down.

Dr. MCMILLAN: Fifteen, 20 years from now I am trying to imagine what the music ministry of our churches is going to be. I am kind of concluding the fact that hymnal music is going to be obsolete. 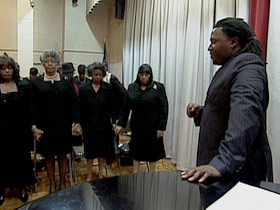 FAW: Initially, Glen McMillan says he chose the wrong kind of music and got off to a rocky start here. But the audition is going well now, and it’s likely he’ll be named minister of music. After 17 years in Memphis, Leo Davis shows little sign of slowing down. Both agree the problems are serious and that finding someone musically gifted is not enough.

Mr. DAVIS: The calling comes with a passion. You have to have a passion to serve.

Mississippi Boulevard Christian Church Choir: While I run this race.

FAW: So the sounds go forth as churches wrestle not just with finding someone to carry the flame, but also with what kind of flame it will be.

Mississippi Boulevard Christian Church Choir: For your name is to be lifted up.