BOB ABERNETHY, anchor: In Chicago, a dynamic young Muslim is working to help solve a problem many religious believers have — how to relate to people of another faith tradition. Eboo Patel is an Indian-American, a Muslim, a sociologist, and the founder and leader of the Interfaith Youth Core, active now on some 50 American campuses. Judy Valente reports.

JUDY VALENTE: A Thursday night at the University of Illinois. The 40 students in this room — Muslim, Jewish, Catholic, Hindu, Baha’i, evangelical Christian — are about to meet Eboo Patel. 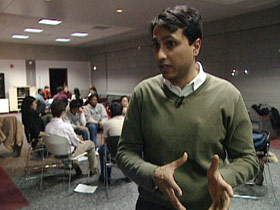 Dr. EBOO PATEL (Founder and Executive Director, Interfaith Youth Core, speaking to students): What I want to open with is one of my favorite, and I feel like the most beautiful, verses of holy Qu’ran, which says that “God made us different nations and tribes that we may come to know one another.”

VALENTE: Patel is a Muslim, a dynamic 31-year-old Indian American — a Rhodes Scholar with a doctorate in sociology and a passion for mobilizing the young. The thrust of his message tonight: shared values.

VALENTE: The students are reticent at first, but under gentle prodding from Patel and his staff they share passages from the writings of their respective faiths and talk about service projects they’ve worked on through their churches, temples, and mosques. 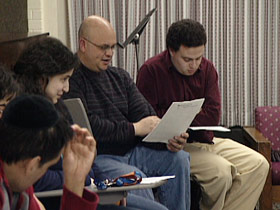 UNIDENTIFIED MALE STUDENT #1: My name is Joel and this is the Jewish teaching (reading from book): “For the Lord your God is God Supreme and Lord Supreme — the great, the mighty, and the awesome God who shows no favor and takes no bribe.”

UNIDENTIFIED MALE STUDENT #2: I’m very moved by the passage from the Qu’ran that we have here. What I’m hearing here is that because God has blessed you, you should bless other people.

UNIDENTIFIED MALE STUDENT #3: I visited New Orleans with some of my friends. We worked with the local Habitat for Humanity chapter. One of the days we were there we worked at a men’s shelter.

VALENTE: These University of Illinois students are being trained for interfaith dialogue and activities. Patel’s plans are ambitious.

VALENTE: That cooperation takes the form of service projects like this one not long ago in Chicago. 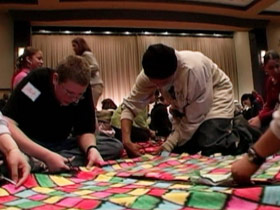 Dr. PATEL (speaking to audience): Today you will do something that seems small. But the blanket that you make will warm a refugee child when she goes to sleep, and the things that you say to the people next to you will give them a window into Islam, Judaism, Christianity, Hinduism, Buddhism that they might not have had before.

VALENTE: Patel is the founder and driving force behind the Interfaith Youth Core. Begun in 1998, the organization is active on 50 campuses across the U.S. Its members are involved in tutoring, caring for refugees, and other service projects.

VALENTE: The goal is to create a new generation of leaders — religiously inspired activists who can change the conversation from one of interreligious conflict to cooperation among people of different faiths. Patel refers to the young leaders he’s looking for as “social entrepreneurs.” 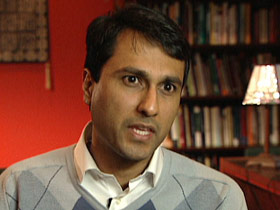 VALENTE: Patel says he was deeply disturbed by the fact that the 9/11 terrorists were young men and that the suicide bombers in the Middle East and elsewhere are also young. He sees the world dividing along a “faith line” between what he calls pluralists and religious totalitarians.

Dr. PATEL: Only the smallest part of humanity wishes and acts upon the destruction of others. The pluralists are far larger. Those of us who believe in a world where we live together, we’re far larger. The problem is we haven’t made our case compelling across the world yet. What we pluralists have to do is say to the people standing on the faith line, particularly the young ones, no. Pluralism is the wish of the creator. It is the greatest opportunity for humanity.

VALENTE: Patel encourages Interfaith Youth Core members to explore deeply their own faith as they learn to respect the traditions of others.

As for Patel’s own spiritual journey, his best friend, Kevin Coval, is a Jewish poet he met in college. Both were influenced by a Catholic professor who had been ordained in the Hindu monastic tradition. The two met with the Dalai Lama while spending two weeks in Dharamsala, India. 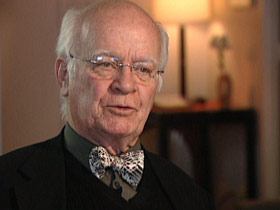 Dr. MARTIN MARTY (Religious Historian): The first thing he’s accomplished is quickening the interest of young people. He immediately built a staff. He’s got volunteers. He goes to high schools. He goes to colleges and universities. He’s tireless in that way, and he proves that you can gain attention and audiences. I think he’s worked very hard and influenced older people on changing the imagery of what you go about in interfaith relations.

VALENTE: Most recently, his Interfaith Youth Core arranged an exchange with students in the Middle East.

UNIDENTIFIED WOMAN (speaking at Chicago youth council meeting): So this is our 12-minute trailer about our Jordan interfaith youth exchange and about the power of young people building pluralism. So here we go.

VALENTE: The video documents a recent trip by these Chicago college students to Jordan, where they met Muslim and Christian students working together on a refugee aid program.

VOICE OF NARRATOR (from video): Building communities where different people can come together and they can hear each other’s stories and share experiences and build relationships. 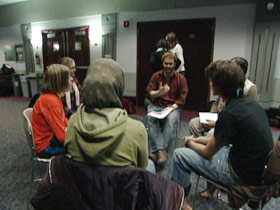 VALENTE: Today’s youth are connected. They interact as never before, says Patel. But he is determined to keep some space between the public side of faith traditions and the private side.

Dr. PATEL: One of the reasons we don’t talk much about prayer or questions of salvation at the Interfaith Youth Core is we believe those are part of the private dimension. But the public dimension is, what can we do together? And that, I think, all religious communities can profitably be a part of. In fact I’m convinced it strengthens religious identities.

VALENTE: To those who argue that accepting the truth of another religion means abandoning one’s own truth, Patel acknowledges there are limits to interfaith dialogue. But, he says, that doesn’t have to limit cooperation — that the Interfaith Youth Core is about earth, not heaven.

Dr. PATEL: To teach your child to only be a Muslim in Muslim spaces or only a Christian in Christian spaces means in a way that you’re teaching them a religious identity that is relevant to only a very small part of their lives, because the vast majority of their lives in the 21st century are going to be lived in interaction with others. 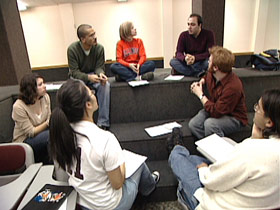 VALENTE: Martin Marty is hopeful about what Patel can accomplish, but —

Dr. MARTY: He has tremendous odds against him, in that interfaith has enemies. It’s not just enemies among intransigent religious groups that fear that if you meet the other you’ll become the other. But there are a lot of people who see the value in our culture of getting militant about other religions. There’s an advantage for whipping up military furor and so on by saying how evil Jews are, how evil Muslims are, how evil Hindus are.

VALENTE: And others are openly skeptical.

(to Dr. Patel): How do you respond to that possible criticism that your vision is very naïve?

Dr. PATEL: I used to take being called naive as a significant insult. I take that less and less as an insult. When people say to me, “Eboo your vision is naïve,” I say, yes, but it is not only naive, because there are enough times when the human condition has transcended tribalism and chosen compassion and chosen pluralism that I think that if we build on those examples we will have a world that we are proud to show our creator.

VALENTE: Patel says it may take as long as 40 or 50 years to build a student interfaith movement to the point where it is a significant social force. But he contends interfaith cooperation is the best hope for a nation with increasing religious diversity and for a world torn by religious violence.

For RELIGION & ETHICS NEWSWEEKLY, this is Judy Valente in Urbana-Champaign, Illinois.

ACTS OF FAITH: THE STORY OF AN AMERICAN MUSLIM, THE STRUGGLE FOR THE SOUL OF A GENERATION by Eboo Patel BUILDING THE INTERFAITH YOUTH MOVEMENT edited by Eboo Patel and Patrice Brodeur INTERFAITH ENCOUTERS IN AMERICA by Kate McCarthy THE FAITH OF OTHER MEN by Wilfred Cantwell Smith THE ONE AND THE MANY by Martin Marty PILGRIMAGE OF HOPE by Marcus Braybrooke INTERRELIGIOUS DIALOGUE: A SHORT INTRODUCTION by Martin Forward "No Religion Is an Island" by Abraham Joshua Heschel (in MORAL GRANDEUR AND SPIRITUAL AUDACITY)