Behind the Scenes in Brazil
by Kim Lawton

People often ask me how our stories come together. The “Street Children of Brazil” story in particular had many logistical complications, and we had to work hard to pull it off. 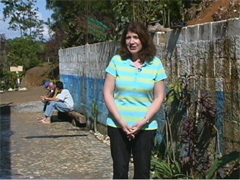 My producer, Patti Jette Hanley, our cameraman/editor Greg Hotsenpiller, and I were in Brazil covering the trip of Pope Benedict XVI. But we also wanted to do a non-pope-related story. Before we left, Patti had been reading about the continuing problem of street children there. She became fascinated and sought out more information. We learned that many faith-based groups are involved in trying to help these street children. As Patti shared her research with me, I agreed this would be a good story for us. Next came the problem of figuring out how to make it happen.

The story really hinged on what organizations and individuals we would profile. Of course, we wanted people doing good work. But there were also several practical considerations: we really thought it would work best if our primary sources spoke good English — so much can get “lost in translation.” We needed someone who was articulate and could comfortably talk about how faith influenced his or her efforts. We needed someone who could provide us with good “visual” opportunities to film for television. And last, but not least, we needed someone whose schedule meshed with ours. (We were so busy covering the papal events we had limited time to work on this story while we were there.)

Several of us started exploring various street children ministries in Brazil. We contacted a number of organizations. As is often the case, we found Cally and George Magalhaes — the people we ultimately used — through word-of-mouth recommendations.

I had contacted an American university professor friend who has spent time in Brazil. He gave me the names of some local pastors, whom I subsequently contacted. Through a long string of contacts, we found Project Eagle, a ministry to street children run by British-born Cally and her husband George, a Brazilian. Patti and I emailed Cally and then spoke to her by phone. We quickly realized she would make a good interview and set up to meet up with her on the day before the pope arrived.

Cally, George, and one of their colleagues, Douglas, met us for lunch at our hotel and gave us background about their work and the overall problem of street children in Sao Paulo. Then we hit the streets. We headed to a spot where Project Eagle teams often work. It’s a park right in central Sao Paulo, next to one of the metro stops. Lots of kids hang out in the park, especially under a bridge connecting Sao Paulo’s highways.

Immediately upon our arrival, we got a taste of life on the streets. As we headed toward the park, we saw several police officers patting down teenaged boys and leading them away. They were apparently “cleaning up the streets” for the pope, who would be staying near by. I asked where the police would be taking the boys. Cally figured they might be held overnight in a youth prison, or just moved to another location further away. She cautioned us not to shoot the situation, for fear the police would confiscate our camera. She and George have had several confrontations with police in the past during their work with street children. These kinds of “raids” are fairly common, she said.

After the police left, we went into the park. Cally saw a teenaged boy she knew sleeping on a blanket near by. She went over to talk to him, and slowly, a couple of other younger kids who had scattered when the police were there came over. She pulled some note pads and coloring books out of her bag and started chatting with them. I sat nearby and watched. Two of the boys looked somewhere around eight to ten years old. They had bare feet, filthy with open sores. Cally took out some diaper wipes and washed their faces. It was very touching to see how they responded to that maternal gesture.

I noticed that some of the boys were sucking on what seemed to be an empty water bottle that they had tucked under the neck of their shirt or under their sleeves. I was shocked when Cally told me they were actually inhaling glue or paint stripper through their mouths. Later we saw two other boys around the same age also doing it. They were hyper-wild, so high on the inhalants. Not only is it dangerous for their bodies, but Cally said many of the kids end up getting killed because they wander out into Sao Paulo’s insane traffic while they’re high.

Many of these kids soon graduate to harder drugs, especially crack. We drove past a neighboring area called “Crakolandia,” where we saw young people smoking crack. Greg shot the scenes from the van as we drove by, but it was too dangerous to stop. The drug gangs get angry when outsiders try show what they do and where they do it. Unfortunately, we couldn’t use those shots in our TV story.

Some of the street kids literally sleep on the streets. Others try to find shelter in abandoned buildings or “squats.” Cally and George took us to one squat under a bridge behind a graffiti-covered wall. We had actually driven past it several times earlier during our trip, never realizing what was behind there. It was a warren of lean-tos and shanties that had seemingly grown up organically, one next to the other. Some had even piped-in bootleg electricity from a nearby building. What struck me was how much people had tried to create a “home” here under this bridge. It was a real community, complete with ad hoc leaders. They try to take care of each other. The other thing that struck me was how many of the young women were pregnant.

On another day, Cally and George took us to a favela, a poverty-ridden neighborhood of shanties. Many of the street kids come from favelas. Cally told me that “favela” is the Portuguese word for a kind of weed. These shantytowns spread like weeds in the cities. Crime and gang activity are rampant here. On the morning we were supposed to visit, cops had raided the favela, and our contacts there didn’t want us to come for fear that other residents would think we were somehow connected to the police. By the afternoon, things had calmed down, and we were able to visit and shoot.

The problems are indeed overwhelming. But Cally and George try not to dwell too much on the big picture. Their mission, they say, is to rescue the street children of their city one child at a time. It reminds me of a story I once heard about Mother Teresa. She was asked if the work she was doing with the poor children of Calcutta wasn’t just a drop in the bucket, compared with the needs. She reportedly replied, “No, it’s a drop in the ocean. But if I didn’t do it, it would be one less drop.”

Kim Lawton is the managing editor/correspondent of RELIGION & ETHICS NEWSWEEKLY.